Radial have released two new reamp solutions, their first new reamp product launch in years. The Reamp Station is an all-in-one active DI and reamp device and the Reamp HP is a compact mono reamp box that can receive the headphone output of an audio interface as its source. 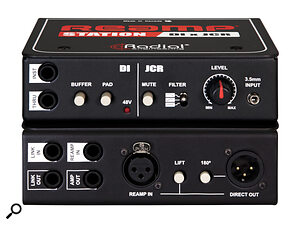 Radial’s new Reamp Station is based on the designs of pioneering reamp engineer John Cuniberti, who built the first reamp box in 1993. The rights to his design were purchased in 2011, which led to Radial launching the legendary Radial JCR. The Reamp Station is Radial’s first all-in-one recording and reamping solution, combining the JCR reamper and a studio-quality active DI circuit into one unit.

Improvements to the active DI design include a unity-gain Class A buffer switch and circuit on the Thru output, which Radial say helps preserve guitar tone when using passive pickups. Inputs include a quarter-inch TRS and 3.5mm mini-plug for connecting mobile devices and tablets. a 48V LED indicator signals if the unit is receiving phantom power. The unit also features reamp level control, a filter and mute switches.

The Reamp HP is a compact device that accepts a signal from the headphone jack on an audio interface, making it easy to connect. The passive Reamp HP features quarter-inch TRS and 3.5mm mini input connections, transformer isolation to eliminate ground loops and variable output control to optimise signal levels.

The Reamp Station and Reamp HP are both available now, priced at $479 and $99 respectively.