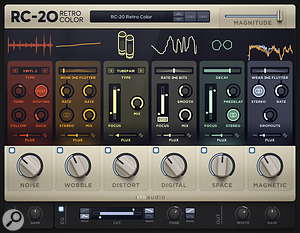 XLN, the Stockholm-based makers of Addictive Drums and Addictive Keys, have released a creative effect plug-in by the name of RC-20 Retro Color. It is designed to add life and texture to any recording, recreating the warm, cosy feeling of vintage recording equipment, say it’s makers.

XLN claim that with its six unique FX modules, RC-20 can replicate everything from vinyl records to VHS machines, adding noise, wobble and dropouts to tracks. Their press release reads: "Its raw distortion and crunchy bit reduction will add grit to your bass and drums. The space and chorus effects will make your guitar sing like never before and the filtering effects fit right into even the most modern club track.” Sounds rather appealing.

The system is built on XLN’s exclusive Flux Engine which adds but subtle (and not so subtle) instability and fluctuations to all of the FX modules, helping to provide the character, warmth and analogue goodness of yesteryear's best technology.

The new plug-in is inspired by classic, analogue hardware and XLN make it clear that it has a wide variety of applications for the creative musician and producer, coming pre-loaded with presets for drums, keys, guitars, bass and post production. It is available in VST, AU and AAX versions (both 32- and 64-bit) and costs €79.95.