One of the core skills of the audio engineer is overcoming limitations. In the days of tape, that might have meant squeezing additional overdubs into the gaps where the bass wasn’t playing, or giving everyone in the band their own fader to move at mixdown. These and a hundred other familiar compromises went out of the window when computers replaced consoles. Practically overnight, we could stop worrying about noise, frequency response, track count, alignment, maintenance and so on. And to compensate, computer-based recording introduced some new and confusing limitations of its own. 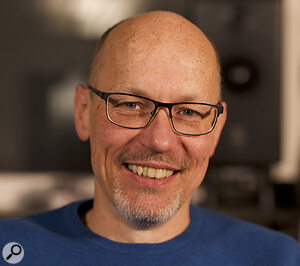 Sam Inglis, SOS Editor In Chief.Photo: J.G. HardingSome of these are inherent to the technology. For example, a degree of monitoring latency is inevitable in any digital system. But the limitation that most of us have spent the most time fighting is processing power. We’ve all experienced the joys of trying to get a busy mix to play back reliably on a maxed-out Mac or PC, doing battle with buffer sizes and our DAW’s freeze function.

In the early days of DAW recording, other computer resources were equally fragile. It was easy to ask too much of a 5400rpm hard drive or even a serial-port MIDI interface. Those days are long gone, but overcoming the limitation of finite CPU power has been more of a challenge, because demand has kept pace with supply. We don’t simply ask each new generation of processors to do more of the same; instead, we want to run ever more complex plug-ins and software instruments. At the same time, the exponential growth in computing power characterised by Moore’s Law has slowed down.

Nevertheless, my sense is that CPU performance is no longer a bottleneck for most users. Even on my humble Mac Mini I can’t recall the last time I needed to freeze a track, while the MacBook Pro I tested last year could run a 300-channel Atmos mix with its eyes closed and one hand tied behind its back. And, as Pete Gardner’s definitive benchmark tests in this issue show, the choices available to PC users are also mightily impressive. When ‘cutting edge’ means multiple streams of uncompressed 8k video, audio starts to look like a solved problem.

Sadly, this probably won’t mean we can jump off the upgrade cycle. OS upgrades, software compatibility and driver support will eventually kick us onwards and upwards. But what it might mean is that we can think differently about upgrading. For as long as I can remember, buying a new machine for the studio has meant a big hit to the wallet, because it’s always been essential to have the latest, fastest components. If CPU resources are no longer at a premium, perhaps we can think about using our financial resources differently.