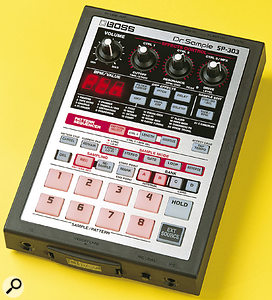 The Boss SP303 has its uses on stage as well as in the studio.In the Q&A section of June's SOS, Paul White responded to a question regarding various methods of playing backing tracks live, and suggested a Minidisc player, CD player, or laptop. However, he missed one perfect solution, which my backing-track-dependent band Age Of Jets relies on, and that is to use a sampler.

We use a Boss SP303, which is a small machine with big chunky glow-in-the-dark buttons. The tracks play immediately when triggered and the connectors and construction are totally appropriate for on-stage use. In all these respects, it's infinitely better than tiny CD players, MP3 players or Minidiscs — we've tried them all!

My other point relates to the Beat-slicing Masterclass by Simon Price from the same issue. In the section 'Beat-slicing Vs Warping', Simon seems to be arguing against Acid 's 'warping' as opposed to beat-slicing. This seems strange to me, because beat-slicing is actually central to Acid Pro (the way I use it anyway), using the Chopper (beat-slicing!) tool. This is absolutely perfect for the techniques he describes — I use it all the time like this. Furthermore, Acid Pro isn't even mentioned on the Useful Software list.

Anyway, I hope that doesn't sound too critical — SOS is an excellent magazine.

SOS contributor Simon Price replies: Thanks Reg — I had indeed overlooked Acid's impressive Chopper, if you'll pardon the phrase. I didn't know Acid had this functionality. Also, I hope I didn't give the impression that I was promoting beat-slicing over 'warping'. Rather, I was just pointing out their relative strengths and weaknesses. In fact, I'm hoping to cover the subject of time-stretch looping tools soon.

I was interested to read David Greeves' comments on the subject of manuals in your Sounding Off column in SOS July 2004, especially the snippet of incomprehensibility at the end.

The day I received that issue of SOS, I happened to be searching for information on a newish Audio-Technica microphone, the ATR 875R. The only web page I was able to find was in what I assumed was Japanese, and, being a resourceful fellow, I used Alta Vista's Babelfish translation tool, located at http://babelfish.altavista.com, to translate the page from Japanese to English.

The results were hilarious, to say the least. Here's a snippet from the product description: "Tube? With respect to structure and adding? A finger direction sexual wheat? Sound? Yes? Profit? Bass? Capital?"

It's all very philosophical, you know. In addition, I learned that the "pond" was "2mA for generality use", and that the Source was "11-52V DC vision elephant, offering or accompanying" — they weren't sure.

It turned out, of course, that the page had been in Chinese, not Japanese, but that didn't stop Babelfish having a go. It's quite impressive, really.

One last word on manuals — in Zen And The Art Of Motorcycle Maintenance, Robert Pirsig points out that the manual you get with your gizmo was probably written in one afternoon by the guy who was least important to the actual process of gizmo production, the one who could be spared from other tasks. You have been warned!

For some time, I've been convinced that the people at Sound On Sound can read my thoughts. I first suspected this last year, when I noticed that reading down through the second letter on each line in one article formed the sentence 'We're watching you, you can't get away from us.' And every so often, the pattern on the wallpaper in my house mutates into the shape of Paul White's face...

This week, I started using Reason for the first time, and while shutting down my Mac last night, I thought "Wouldn't it be nice if there was a Reason Notes column in SOS?" Picking up the new issue of SOS from the doormat just now, the true horror of this mind control became apparent.

Seriously, though... thanks, chaps!

News Editor David Greeves replies: Drat! Until now, the thought-control machine being perfected in the secret laboratory atop SOS Towers has been a well-guarded secret, soon to compel you all to renew your subscriptions. And we would have gotten away with it, too, if it weren't for you pesky readers!

In all seriousness, we've had lots of requests for a regular column covering Propellerhead's ever-popular Reason software — the 2003 Reader Survey was full of them — so, in a way, your minds have been controlling us. It never occurred to us that it might be the other way around... 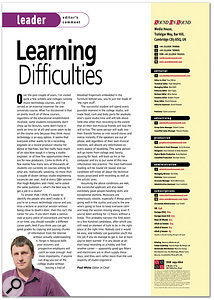 Thank you to Paul White for his recent leader column on music technology education [see SOS July 2004 — Ed]. Talk about manna from heaven! I have been a programme manager for a BTEC National Diploma and 'A'-Level examiner in Music Technology for several years and I couldn't agree more with all of Paul's points. It makes you wonder whether these guys really do want a career in the recording industry! I have posted the article on the noticeboard at my college, although I fear only the minority of truly committed students will actually read it!

Editor In Chief Paul White replies: I'm glad you agreed with my rant. It is very frustrating to come across students who seem to think Music Technology is an easy ride. As I pointed out in the column, if they aren't willing to work hard and apply themselves at this stage, they don't stand a chance in a business which is as competitive and has as few opportunities as this one. We've had a few more nice comments from other colleges trying to get the same points across to their students. Feel free to print it out in a 24-point bold typeface and pin it to your noticeboard!