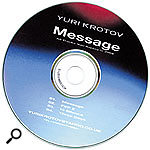 Magnus Fiennes (MF): "I think this style of trance is a bit tired now — at least the new psy-trance stuff is vaguely innovative. You can really hear his enthusiasm for it, though, and that makes it work.

"The production on this is very good, he's an efficient programmer and there's a real sense of space throughout these tracks. Structurally, he knows when to do the fills and the drops, it's very economical."

Haydn Bendall (HB): "This isn't the sort of thing I usually listen to, but I find this quite enjoyable. It's quite clean and the structure is good. It's got a very young, energetic feel to it and I really like that. Probably because I'm not young! I find a lot of people are making music that sounds old to me these days and it's nice when you find something that has some energy and enthusiasm like this."

Sam Stubbings (SS): "That's weird though, because I'm 27, and this sounds old to me — it sounds like someone young doing something old. I mean this sort of simplistic trance stuff is at least 15 years old now."

HB: "I agree about the style, but I think that there's a lot of energy in the production and that makes it sound fresh to me. He's done this very nicely, wherever the sounds have come from, they're well chosen and they fit together very nicely. However unimaginative this is, there is a real clarity to the way he sets out his music and that's worth commending."

SS: "I think the thing that frustrates me about this sort of music is that with the technology that's available today you could program something like this in about five minutes. There's just so much more you could do.

"I know people who run trance labels and play this sort of thing in clubs and I just can't see them being interested in this. It's just not going to add anything to their record bags. He's obviously very serious about this though; some of the production is lovely, the sound of the kicks and the clarity of the leads are really nice. I just think if he wants to break through and do this professionally then he needs to do more than just the simplistic stuff. There's more than enough of this sort of thing already, it's just boring now. We shouldn't be sitting here in 2004 listening to a trance track that sounds like this."

HB: "I think this is the best thing we've heard tonight, apart from perhaps the second track by Triviul [see last month's Business End]. It's all too easy for people doing this style of music, with acoustic guitars and vocals, to end up repeating some very well-worn styles and cliches but this has got a certain originality to it. I like the simplicity of the production. I think there's huge temptation for people to over-produce nowadays, probably just because of the complexity of even the most basic recording equipment. It's good when people feel able to ignore that and just make a recording of what they're actually doing. They haven't been playing together very long but they should definitely stick at it — this could develop into something really good."

Nikolaj Bloch (NB): "I think this is quite exciting, I don't think it's brilliant but I can imagine it developing into something really good. From their letter it sounds like a new relationship between the two musicians and I can imagine that if they stick at it they could do something really nice one day. This is good but it's not quite enough at the moment. They've definitely got the right approach though — they just need to keep doing it."

SS: "I think this is the first thing I've heard tonight that I'd like to take home and listen to. I really like the first track and I'd like to hear that again, I really enjoyed it, it's a really good song. It reminds me of Neil Young actually, which is no bad thing to my mind. The production is quite basic, but that's not too much of a problem with this sort of music — especially when you've got good songs. As Nikolaj said, it does need some more work, but I can't see any reason to believe that they shouldn't get better — with the songwriting and the production."

MF: "I really like the singer's voice, it's just got a certain timbre to it which is really nice. It is early days with this, there's nothing particularly spectacular here but it's certainly promising. The recording's really not bad at all, they seem to know what they're doing with that — they're not over-stretching themselves, there are no posh production tricks or anything like that, it seems a very honest representation of the music." 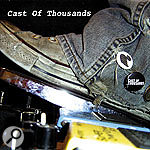 MF: "I think they suffer from doing a lot of gigs in pubs, with no-one really being honest with them, and then going straight into a studio and recording exactly what they've been playing in their gigs. For a miniscule fraction of a second I thought I was going to like this — the opening line with the slightly Michael Stipey voice. It looked good for about three seconds and then there's just this stream of platitudes and clichés — really terrible lyric writing. This is utterly pedestrian and full of completely unjustified self-importance."

SS: "There's just no real audience for this sort of middle-of-the-road indie stuff these days. The mainstream these days is pop music and there are things like Coldplay occupying the place where these guys would have fitted in a few years ago. It all seems naïve and unimaginative."

HB: "I think the intelligence that they've applied to this is just pathetic. The really frustrating thing about this, though, is that there's just enough to make you think that they could be good if they'd just put a bit more time and effort in. That goes for the production as well as the songs themselves. They need to give this a lot more time and commitment if they want it to get anywhere."

SS: "I think the worst thing about this is their press release. They need to understand who the music industry are — they're cynical bastards! I think most people would sit around and laugh at this.

These guys are able musicians, they understand melody but it seems like there's nothing at the heart of their music. They need to think more about what they're doing and try to develop some ideas of their own. There's no reason why they shouldn't produce something that's much more original than this."

NB: "I agree, this is fairly mediocre, but it's also very badly recorded. There's no clarity or space in this — it's all very dense and over-compressed. They need to think more about how they can open it up and make it clearer because it's a bit of a mess as it is.

"I think a lot of people — bands, musicians — are very impatient these days. Maybe that's to do with having such easy access to recording equipment, I don't know. I think so many of them could benefit from a bit more patience — just to spend more time playing gigs and letting things develop and evolve before you put them on tape."

Haydn Bendall: After working as a piano tuner for Steinway & Sons, Haydn was employed at Abbey Road studios for over 17 years, including 10 as senior engineer. in addition to working with artists such as Fleetwood Mac, George Martin, Elton John, Damon Albarn and Hans Zimmer, Haydn has collaborated on several musicals with Eric Woolfson and has made extensive recordings with all the major London orchestras. Today, Haydn is involved with Schtum Ltd and The Firebird Suite.

Sam Stubbings is the Senior Producer for the DVD division of Metropolis. He began his career five years ago at Abbey Road and has since worked with artists ranging from Paul McCartney to Muse. More recently he has produced both the first DVD single (Bjork's 'All Is Full Of Love') and the first commercial DVD-Audio disc (Holst's The Planets).

He also has his own act, Redstar, who are currently recording an album and gigging in London.

Nikolaj Bloch is a freelance engineer, writer and programmer with almost 20 years' experience in the music business. As the guitarist in the band Subcircus, he played all over the world until their split in 2000. Since then he has worked as a programmer and soloist on several major Hollywood films. He has also written for a range of artists varied enough to include American country singers and Jimmy Somerville. He enjoys spending time writing and collaborating in Nashville throughout the year.

Magnus Fiennes is a composer, producer and songwriter. His production career has taken in a diverse range of artists and bands, from the Spice Girls and All Saints to Pulp and Tom Jones. Recent co-writing credits include Massive Attack, Kylie Minogue, Sugababes and Liberty X. He has also composed several film scores and written for numerous TV shows and commercials.