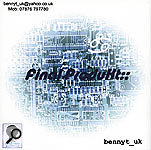 Despite the snobbish attitude to Propellerhead's Reason software studio which some of my musician friends seem to have, I'm rather fond of it, and am often impressed by the use made of it in demos sent in for review. Ben Turner and Adam Castleton's demo is a case in point. They choose good sounds to create their drum patterns using the Redrum module and flesh out the tracks using a Korg Microkorg, Linplug's Albino software synth and also Reason's own Malstrom synth. The duo are not averse to adding the odd bit of manipulated vocal, whether it's vocoded (using the Microkorg), heavily equalised or chopped up. Even that old Paul White favourite, the nose flute, makes an appearance!

The first track begins promisingly with a Roland 303-style kick, sidestick snare and hi-hat pattern before a retro electronic snare (of the heavy sneeze variety) and a harder bass drum arrive to reinforce the rhythm.

The track builds nicely but then seems to grind to a halt around the two-minute mark, leaving an awkward hiatus before a rather clumsy change into a new section with a fast, echoed bass line. A brief return to the simple drum pattern that kicked the whole track off would have provided continuity for this break, because, as it stands, the impression is that we're going into a totally new track. The original drum pattern could then be dropped once the new bass line is established. And, while we're on the subject of the arrangement, I played this track three times and I still didn't think its lengthy running time was justified. A bit of self-discipline would yield an excellent four minutes instead of a drawn-out six.

However, some of the sounds and, in particular, the use of tape echo, delay and the Microkorg's vocoder are very good indeed. I also liked the vocal sound from the Rode NT1A with phaser and echo effects and a severe bass cut, but I'm not sure why it had to be panned mostly to one side of the stereo field or chopped so severely. Chopping the vocal lines later in the phrases, perhaps with a triplet-style timing, would have been more interesting. After all, Ben's voice is good enough to be heard for some of the time at least!

It may be that more time was spent on it, but the arrangement of the second track works much better, even with a running time of eight minutes plus. Once again the mix is unfussy and manages to achieve quite a big sound from Reason. In fact, one of the main differences between it and some of the professional tracks from bands like Leftfield is the latter's 'deeper' bass sound. A very slight EQ boost at 60Hz would help to increase the low end, but would have to be used selectively. The third mix, for example, has enough low-frequency content provided by the bass drum and bass synth.

While I don't normally comment on the quality of the cover artwork on the demos we receive, I've noticed that in some cases it doesn't quite match the quality of the recording! This is a shame, because we live in an age where it's pretty straightforward to knock up a passable CD cover using the software bundled with most computers. And if you can't, I'm sure you know someone who can. You may ask if it should really make a difference, but whatever you choose to put on the cover of your CD is necessarily going to have some influence on the person who picks it up and listens to it, whether it's me, a record company A&R or a prospective fan. We're not expecting glossy, expensive-looking artwork here (although some of you really do produce excellent CD inserts), just something which gives a reasonable representation of the mood of the music that you're trying to promote. 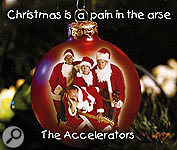 With their seasonal single 'Christmas Is A Pain In The Arse', the Accelerators, a rhythm and blues function band from the South West of England, managed to receive some airplay from the Johnny Walker show on Radio 2 in 2002, plus a play on the TV soap opera Emmerdale in 2003!

The novelty Christmas song is fun, but as dated as DLT's jokes, and also not the best track on the CD! Yet there's something appealingly naive about the late-'60s/early-'70s production style. The guitar parts have an authentic retro sound to them, created using a Vox amp miked up using a Shure SM57. The microphone was placed just off-axis to one of the speakers, a popular technique which yields a slightly more mellow sound than on-axis miking. The signal then went through an LA Audio preamp and was compressed prior to recording using the Alesis 3630 compressor for a bit of dynamic control. This shows a certain confidence and competence in the recording department and the guitar sounds sit nicely in the mix. The bass guitar was added later (at least on the first song) and, although this is a slightly unorthodox way of tracking, it has worked out OK. The bass was played through a Trace Elliot bass rig and miked up using the Audio-Technica Pro 25 microphone. No compression was used, possibly because the compressor on the amp was being used already, and the sound was even and punchy enough at source.

As for the drums, have you ever come across a drummer who refuses to take the front head off a bass drum, or cut a hole in it to allow access for a microphone? The Accelerators have got just such a drummer in Sean 'The Hitman' Pocock. Drummers are usually fixed on the idea because of something they've read in a drumming magazine, or because they've seen a drummer who's got a terrific sound playing live with a double-headed bass drum. I actually like the sound of a miked-up double-headed bass drum, but the sound is not always appropriate and can lack separation and punch if your taste is for a short, tight kick. Sure enough, in the end the kick drum on this recording was triggered manually by playing along with the original on a MIDI keyboard connected to an old Yamaha MU128 sound module. This is not a simple feat, so full marks for a successful result using this method! I notice that there's the old problem with over-loud hi-hats on the title track — the result of the hi-hat bleeding into the snare microphone — but this has been dealt with on the other two tracks. Whether this was achieved using gating or simply by more careful microphone placement at source is hard to tell, but the latter is definitely the way to go for future recordings.

To sum up, this is a good, clean recording with a few overdubs but no fancy production frills.

Nigel Rushbrook invested in some old analogue instruments, digital effects and a hardware sequencer a few years ago and is now wondering if he should have bought an all-in-one workstation synth. I think it's creatively useful to be able to draw from a number of sound sources as Nigel can with his setup, and it also develops a wider understanding of different programming approaches. However, the Achilles heel of his studio is the fact that he's mastering to cassette. Nigel has since managed to arrange his compositions into order using a simple digital editor but is now wondering if they need remastering! The fact is that these compositions vary quite a lot in mix quality. For instance, the fourth track has good instrumental balance and simply requires some high-frequency boost between 12 and 14 kHz. Others require more fundamental remixing to rectify basic errors like a quiet drum track. In the end, I think Nigel's time would be better spent composing new material and mixing it to his new digital recorder.

They might not be able to spell, but this is an excellent slice of urban R&B with great vocals from Joanna Thompson and sympathetic programming from Damien Hughes. I especially liked the use of minor seventh chords on a retro electric piano and the tuned 808 cowbells on the first mix, but the duo also keep a contemporary feel, using jungle breaks to spice things up at appropriate moments. Despite the band's protests, the quality of the recording isn't that bad, although the punchiness of the drums tends to leave the keyboards and guitars sounding a little thin in contrast. On the second mix, the duo open with fast arpeggiated harp and piano and then bring in a Latino feel by adding congas, before the arrival of a 4/4 kick drum. There are some flaws in the arrangement but these could be easily sorted out. For instance, I think it's a mistake to keep the arpeggiated parts going during the verses, because it makes the whole mix sound too busy and detracts from the vocal. However, if used solely to create dynamic lifts, they would certainly do the job.

On the evidence of the opening track, Simon is clearly a Kraftwerk fan! The other tracks are more contemporary in nature (think DJ Shadow, Future Sound Of London and Death In Vegas) and feature electric guitar. Simon is worried about the bass end of his mixes, but, in the case of the second track, he should be more worried about the conflicts in the mid-range. The wah-wah rhythm guitar is good but the melody guitar is too heavily distorted and lacks definition. I'd suggest panning the stereo rhythm guitar wider to create a hole in the centre for a re-recorded melody line. The rasping synth joining the arrangement after about two minutes only adds to the tonal confusion by competing with the guitar. Deal with this by closing the filter down a bit to limit the harmonic range and also drop its level in the mix. As for the bass, it's indistinct because it's too similar to the kick drum sound. Try using a bass sound with more mid-frequency content to complement that of the rather good drum loop and then mix it a little louder. 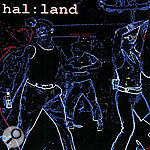 Also influenced by Kraftwerk, as well Depeche Mode and Dead Or Alive, this Swedish band open with a simple but effective song. The vocal is vocoded and there is some chanting in Swedish, heavily treated with reverb, which, according to their letter, is in the regional accent of their home town! In fact they go in for vocal effects quite a lot, using a distortion effect reminiscent of the Daleks from Doctor Who but thoroughly in keeping with the robotic nature of the beats. I also think the use of effects is an attempt to disguise the low quality of the microphone they're using, which seems to suit the group vocal but is not up to the job for solo voice. Even so, Hal:land inject some self-deprecating fun into their music. The third mix 'Jag Vet Ente' ('I Don't Know', and, yes, that is actually what it's called — I'm not simply showing up my abysmal lack of Swedish!), employs an eighth-note synth bass line in classic 12-bar blues pattern! It's also at a rather manic tempo with the kind of odd chanting which would make it a good alternative party track.