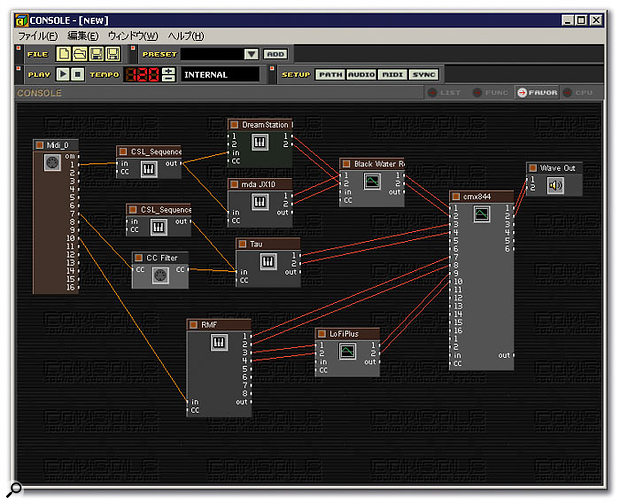 I don't think I've ever seen your magazine mention a useful and unusual plug-in and/or stand-alone app from ART Teknika called Console Sound Modular Studio [$54 from www.console.jp]. The company is Japanese and seems to have done a limited job of promotion, so not many people have found out about it. I am emailing to suggest that you check it out.

Console is a modular plug-in environment for Windows PCs that can behave like a plug-in itself, very similar in operation to the more well-known Energy XT. Console has fewer features, but a far more streamlined interface, which may be preferable for some people. Also, it is well designed for using plug-ins with multiple ins and outs — surround plug-ins, for example. It's very convenient when constructing a sound using parallel processing or several soft synths and plug-ins at once (this can be awkward in some hosts in any case), as you can save the whole configuration as a Console patch and use it somewhere else later on.

Routing and configuring automation using MIDI Continuous Controllers (CC) is very easy and clear. For most plug-ins, MIDI CC-driven automation of any parameter is possible more easily than normal, and Console can be configured to respond to the host's automation. With the use of MIDI plug-ins, envelopes or LFOs can be added to a software instrument for each note played. I hope you check it out because it is a good tool for more innovative producers.

The last two products from AAS you have featured — String Studio and Lounge Lizard EP3 — have been reviewed by Martin Walker. He also created presets for each instrument. Doesn't the prior relationship with the company indicated by the contribution of presets imply a lack of impartiality? Surely your two main functions — advertising and reviewing products — should be kept strictly separate? Otherwise how can we, the readers, trust the reviews?

PC Music Specialist Martin Walker replies: Over the years I've contributed patch banks for a number of different pieces of software, including Wave Arts' MasterVerb and DelayDots' Spectral Suite and Spectrum Worx, plus Applied Acoustics' String Studio and Lounge Lizard EP3, all of which have subsequently been bundled with the products.

Now, I could understand your concern if I were being paid for this work, but in none of these cases did any money change hands. I created all of these presets during the course of reviewing each product, simply because I was so impressed with it that I typically spent extra time beyond the review period working on more 'individual' sounds for my own music. Having done this, it only seemed fair to forward such endeavours to the developer, so that they could make them freely available to others who might find them useful.

The only difference with String Studio and Lounge Lizard EP3 is that I was initially offered beta versions of the software so I could begin my reviews a couple of weeks before the final release date. Unlike some other magazines, here at SOS we don't review beta versions as if they were the final product in order to get our reviews published first. Nevertheless, initially working with a beta version prior to getting the finished product does give us the chance to spend even more time getting to know a piece of software, and I was so impressed with both of these that I'd already finished a preset bank before the final release version was signed off. This is the only reason why a bank of my sounds could be included with these products when first shipped.

So, far from indicating a lack of editorial impartiality, you can be confident that if a product ships with a bank of presets that I have designed, it means that I was so impressed with it that I went beyond the call of duty in the course of my review!

I have a question for Sam Inglis regarding his review of Steinberg Hypersonic 2 [see SOS March 2006]. When you compare version 1 with 2, is there any improvement in the original sounds like 'Bright Grand Piano' or 'Bright Brass Section'? Do these sound identical in both versions?

Features Editor Sam Inglis replies: Hypersonic 2 contains a lot of new patches that are made from the same recordings as the old ones, but use more multisamples and have longer decays. So, for instance, the basic tonal quality of the new piano sounds is pretty similar to the original ones, but the sample split points are less obvious, and they respond to velocity more naturally.

As for the original patches themselves, I don't think they are any different. However, one thing I didn't mention in the review is that there is a global 'Hype' control, which affects the entire output of Hypersonic. According to the manual, this is supposed to make the sounds sit better with 'already mastered' material. It seems to add high end and some kind of dynamic punch to the output, and changing the Hype setting would certainly make a difference to how an indivudual patch sounds.