Personally, I'm not a great fan of TV reality shows based on the 'phone-in poll' format, but I've caught the occasional glimpse of the ones relating to cooking, and it seems to me that some of the advice offered might apply equally well to recording and mixing. Often, it seems, contestants are criticised for trying to bring too many ingredients together in the same dish, so that the flavours become confused rather than harmonious. Of course, you can see where I'm going with this, because many problem mixes can be traced back to either too many different parts competing for attention or to the wrong choice of sounds in the first place. The fact that modern recording software and hardware offers us astounding track counts shouldn't be taken as an invitation to fill them all up, and where large numbers of tracks are needed on a project, it will probably be to introduce spot sounds or elements that play for only a short duration. 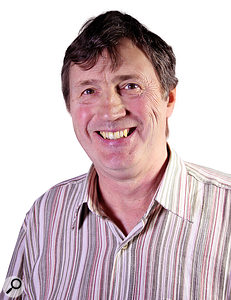 Of course musicians can be partly to blame; back in the steam-powered days when I ran a little eight-track analogue studio, clients would often use up only six or seven of the available tracks and then agonise over what they could possibly add to their song to fill up what was left. This is clearly not a basis upon which to create serious arrangements!

Perhaps the best way to avoid ingredient overkill is to listen to some work that you admire in a similar style to your own and see if you can pick out the different parts. Even the grandest pomp-rock epic can usually be whittled down to a couple of guitars, bass and drums, with maybe two or three keyboard parts and some vocals. If you're using one of the excellent sample-based drum instruments to produce your drum parts, then it is hard to see how any well-constructed piece of music could run to more than 16 or so tracks unless you're doing film orchestration — in which case this probably doesn't apply to you!

The more I think about it, the more the recipe analogy holds up, because any decent rock or pop song comprises a small number of core elements with maybe a little added garnish in the form of extra percussion and brief snatches of ear candy such as synth punctuations, reversed cymbals and so on. I like to think of these secondary elements as being akin to using spices in food (or perhaps I just like to think of spices and food as it reminds me of curry?), and while they add character to the main ingredients, they are present in much smaller amounts and are designed to complement rather than obscure the original flavours. I guess what I'm saying is that if you take the time to choose better ingredients (more suitable sounds) and combine them sensibly rather than layering on the contents of your entire larder, you're more likely to end up with a classy creation that's a pleasure to mix and to listen to. This is invariably much better than creating a leftover riff vindaloo! That's all for this month, as this talk of food is making me hungry!