Across The Board By Roger Nichols 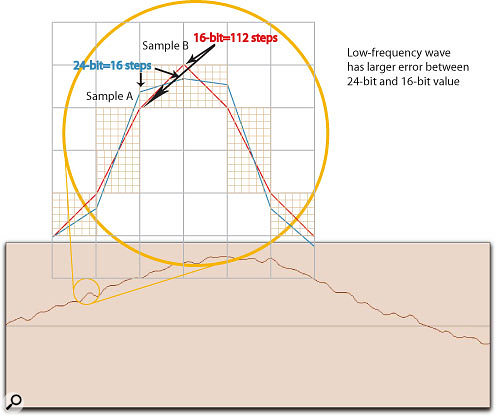 How can you go wrong with digital-to-digital transfers? And why is it bass that sounds better at 24-bit?

I am currently transferring digital multitrack tapes from early (1982) projects into Pro Tools for surround mixing. I remembered some of the problems with early recordings that related to early A-D and D-A converter designs. During these transfers I wanted to correct any of the early shortfalls, if possible. Even though they were 16-bit recordings, transfers to 24-bit would help preserve the accuracy of the original recordings.

While I wouldn't want to discount Roger Nichol's perceptions of the sonic improvements gained from 24-bit conversion over 16-bit, the technical explanations he offers in this article are based on an incorrect understanding of digital audio, combined with some greatly misleading graphical misrepresentations. In short, his arguments completely ignore the critical role of dithering.

His claims that the improved resolution is due entirely to smaller quantising step sizes is flawed; there are no steps at all in a correctly dithered conversion system. Indeed, dithering ensures that the repeating amplitude differences he ascribes to the difference in quantising levels don't exist because of the randomisation in level caused by dither noise.

Consequently, the perceived improvement in 'resolution' is restricted entirely to a reduction in the noise floor and the related pyscho-acoustic effects of that. The noise floor in a dithered 24-bit system is 256 times (48dB) lower than that of a 16-bit system. Hugh Robjohns - SOS Technical Editor

For more information on the fundamental principles of digital audio, please read: www.soundonsound.com/techniques/digital-problems-practical-solutions 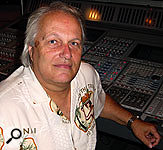 Roger Nichols has been professionally involved in the music business since 1968, working as a staff recording/mixing engineer at ABC Records and Warner Bros before becoming an independent engineer/producer in 1978. His work with Steely Dan in particular has led to a string of Grammy Awards and nominations, including a Best Engineered Album award for Two Against Nature. An advocate of digital recording since 1977, Roger designed and built the first digital audio percussion replacement device and has lectured on digital audio around the world.Photo: Ashlee NicholsThese early 3M digital 32-track machines did not have digital outputs, so the transfers were to be made via analogue cables into new 24-bit converters. There was no such thing as a 16-bit converter when the 3M machine was designed, so they used a unique combination of a 12-bit converter with an additional four bits of an 8-bit converter for gain ranging. This required a very expensive HP spectrum analyser to set the tracking of all the converter elements.

With most digital audio now being recorded at 24-bit, nobody thinks about the ultimate 16-bit destination and what that conversion does to the sound quality. The first impression is that you are just changing the noise floor from -144dB to -96dB, which isn't going to hurt the punchy high-level mix that you spent so much time on. But there is much more to this conversion than meets the ear.

Just to refresh your memory, 24-bit audio gives you 256 times more resolution in the position of each sample on the waveform. The first time I heard 24-bit, recording Bela Fleck and the Flecktones, I expected to hear more sheen and high-frequency clarity. I was incorrect. The most noticeable difference was in the low frequencies: the mouthwatering sound of the bass, the breathtaking realism of the kick drum, the clarity of vocals, and the low-end improvements that finally make the banjo worth recording. It took me a while to figure out why this was the case, but I finally got to the bottom of it.

This 256 times higher resolution of a 24-bit sample is in effect everywhere on the waveform, from the lowest levels to the highest peaks. A sample point nearing 0dB full scale is 256 times more accurate than the same sample recorded at 16-bit.

Now, let's look at a bass waveform, a long, slow, slope across the screen. It looks nice and smooth until you zoom in (above). Now you can see the changes in sample level. Look at the same samples at 24-bit and 16-bit: there is a difference between their positions vertically. Remember that the 24-bit representation is 256 times more accurate.

To cut down on the confusion with bit sizes, let's use the size of the smallest bit in the 24-bit scale as a reference and call it a step. The difference between Sample A and Sample B in the 24-bit recording is 16 steps. The difference between the same samples in the 16-bit recording is 112 steps. That is 96 steps away from where it should have been — a 700 percent error in a low-frequency signal.

A high-frequency signal's vertical change is much greater because the rise time is faster. The difference between two samples is much larger. If you look at the difference between the 16-bit and 24-bit versions, the percentage of error over the change from Sample A to Sample B is much smaller.

It is this percentage of change between samples, the ripple in the vertical sample position, that is perceptible. In the low frequencies, the percentage of error is high and the difference can easily be heard. In the high-frequency range the percentage of difference is lower and falls below the threshold of detection in human hearing.

Since we are talking about vertical bit resolution, we should touch on bit linearity. Linearity is the error between relative voltages produced by successive bits in a converter. During each sample period, when a bit is '1', the digital-to-analogue converter puts out a voltage. Each bit of a 24-bit sample has a different voltage value assigned to it. The voltage value of each bit is supposed to be exactly half the value of the bit above it. The voltage range of a typical D-A converter is plus or minus 10 volts. The top, or most significant, bit is actually the sign bit and sets the voltage to plus or minus. The voltage value from each of the remaining 23 bits is added together to arrive at the final output voltage for that sample. The same thing happens for each sample 44,100 times per second for CD audio. 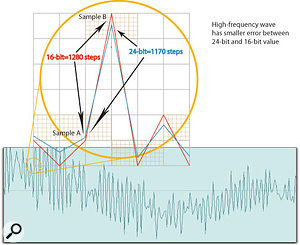 As a percentage of the difference between adjacent samples, the quantisation error is much greater for a low-frequency signal than a high-frequency one.

As we have seen with the 24-bit value error above, the vertical positioning of these voltages is very important to the quality of the sound. If the error between bit 1 and bit 2 is 0.00001 volts, then we do not have a very high percentage (0.0001 percent) of error. That same voltage error at bit 22 or bit 23, however, is 100 percent or 200 percent, respectively and causes the differences we hear between converters. Since all of the voltages for each bit are added together, the errors for each bit are also added together when the converter produces the analogue voltage relating to the PCM sample.

If you have access to an older digital playback system without oversampling converters, try this. Send your mix to tracks 1/2, 3/4, 5/6 and 7/8. Bring the pairs back to your monitor switching. Make sure the levels are the same out of all pairs. Listen to your mix and switch between stereo pairs. Do you hear a little difference? Hmmmmm. Converter linearity the problem, Bunky?

Let's compound the issue a little. A-D converters have the same problem. The error for each bit during the recording is added to the error for the bits during playback. In early digital machines they hand-matched A-D and D-A converters to match closely to get the best sound on each track. If you had to replace a converter, you were in big trouble unless you replaced both with a matched pair. Since A-D and D-A converters basically work the same way, some machines used the same converter for recording and playback to avoid tracking problems.

There were linearity problems with the 3M machines, but you could set the D-A tracking to match the A-D tracking so that the throughput of each track was linear unto itself. This meant that what you recorded on a track was what you played back on that track. This would be good enough for the transfers I needed to make. I did have a digital interface board that I built for the 3M, but if I'd used that, the digital transfers would have had the non-linearity of the A-D converter without the correction of the D-A converter. So, analogue transfers it was to be.

Current oversampling converters do not have the linearity and tracking problems that conventional converters have. Usually you are dealing with a 1-bit converter that samples at 256 times the sample rate. This type of converter just looks at the incoming signal and compares it to a reference voltage. The comparing circuit then decides whether the reference voltage should go up or down. This is done very fast many times between samples. Now the reference voltage that matched the incoming signal determines the resulting PCM value. Only one bit, and no linearity errors.

Making transfers from old digital formats is becoming a regular occurrence as record companies go back through their vaults and re-release vintage projects. Research into the history and design of the original machine can not only help you make the transfers, but can help to more accurately preserve the music as it was meant to be recorded.