What's really important when it comes to musical creativity?

Terms like 'creativity' and 'innovation' are often bandied about by music equipment manufacturers and software developers alike. All too often we find ourselves viewing the web page for some new device and wondering how we can fund the purchase of this new and essential product. The truth is that most of the time the product is just that, and is designed solely to cash in on the desire of most producers to pursue sonic perfection. Now I'm not saying that every piece of equipment or software is a waste of money, far from it. It's just that true innovation and creativity doesn't come from getting your hands on the latest new piece of gear — it's having the vision to see its benefits and utilise it in a new way that counts. Usually, this means finding a use that even the designers and engineers behind the product hadn't thought of. This process doesn't necessarily come from investing in the most powerful new equipment; rather it comes from understanding and pushing the boundaries of the equipment you already have. 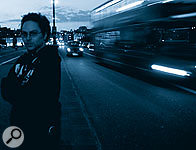 A while ago a student walked into my workshop and introduced herself. She informed me that she was 15 years old and that she had been producing music at home for a few months, and handed me a CD. I had a feeling that there might be, at most, a couple of good tracks with some potential. What I wasn't expecting was a CD full of well developed and tastefully arranged music. I skipped through the disc and asked if there was any more. Maya had two further CDs with an equal wealth of quality music. As I enquired further I found out that Maya only had an old iMac (the original model) with Cubasis (a lite edition of Cubase with a total of eight audio tracks). To make the drum beats she had arranged drum samples in the Arrangement page and used a similar technique to arrange the guitar parts. As she didn't play the guitar, she had recorded her parts through the iMac's built-in microphone note by note, then bounced to one track to free up more tracks for vocals. The vocals had also been recorded into the iMac's built-in mic.

This may not sound particularly impressive, but what I want to draw your attention to is this: while Maya didn't have the latest or most sophisticated tools, she did have the creative vision to harness the potential of the tools that she did have.

All too often in the pro-audio world the tendency is to use powerful tools poorly. It's easy to concentrate on 'professional solutions' and lose focus on what really counts — producing a high-quality piece of music.

I have too many personal experiences of working in sessions bankrolled by major labels where the producer and engineer waste valuable time deciding on which technique to use to capture or edit this thing or that. True innovation is coming from the small players. With more people producing recorded music than ever before, the manner in which we harness the power of the technology will become ever more important.

Learning and studying the art of record production is firmly grounded in tried-and-tested industry methods. This makes total sense, and is of course something I encourage my students to practise. However, it's my personal belief that the record industry needs to wake up and look around at what's going on in the real world. The young people of today are the first generation of producers who only know music production on computers. The freedom of thought and methods of working they possess are totally unlike those of any other generation. Yes, they are learning classic studio techniques from the previous generation of engineers, but unlike those who've gone before them, today's young producers have an understanding of the computer and a creative vision that doesn't tie them to traditional methods. Whilst those coming up through the industry should acknowledge the past, the record industry needs to realise that learning is a two-way street, and that maybe new ideas are equally worthy of recognition.

So lock yourself in your studio with that old keyboard and (say) a cut-down version of Logic. Work on new methods of production that suit your style of music and define your musical identity. New experiences make life interesting, so why should it be any different with music?

As for Maya, she's now on a creative development scheme awarded by NESTA, and I am still finding new surprises from the next generation of producers.

Ben Mullon is a senior tutor for the London venue and creative centre The Roundhouse. He is currently producing a Maori-influenced album, Mihia, to be released through his own record label.