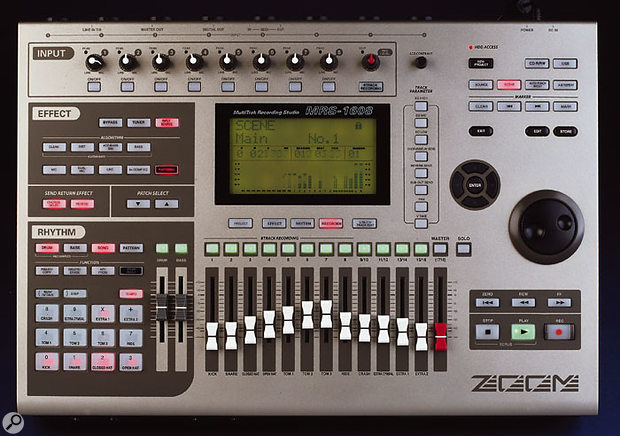 The Korg D1600 MkII (above) and the Zoom MRS1608 both offer 16-track recording, but their other features are designed to appeal to very different kinds of musician.

I have been spending a lot of time reading SOS reviews lately, and I must say, they are among the best I have ever read. My question is specifically for Tom Flint regarding his review of the Zoom MRS1608 in the January 2005 issue. In it he compares the MRS1608 to several machines in the 'Taking On The Competition' section. There is no mention of the Korg D1600. Since these are the two machines I am seriously considering, I am curious as to why the Korg was not included.

SOS contributor Tom Flint replies: My reason for not making a comparison between the MRS1608 and the D1600 is that digital multitrackers seem to have started evolving into two distinct types, and in my opinion, the Korg D1600 is on another branch of the evolutionary tree from the MRS1608, although I realise that they still have a lot in common. 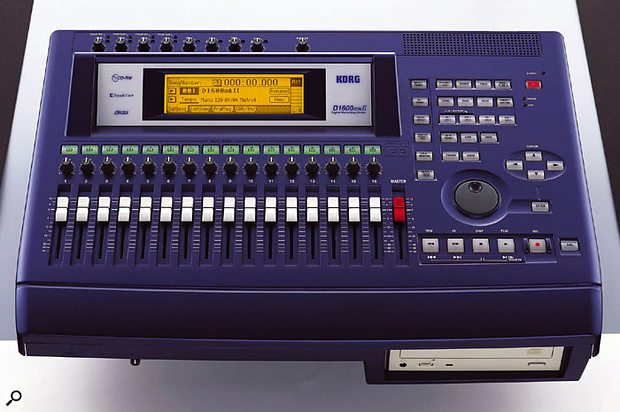 The D1600 belongs to the family of digital multitrackers which are primarily concerned with providing fairly traditional recording, mixing and editing facilities. The feature set includes effects, and, in some cases, sample-editing tools, but the emphasis is on the production of recorded sound rather than its creation. Some multitrackers in this category have fairly serious I/O facilities including features like word clock I/O, and multi-format expansion slots so that they can interface with other professional studio equipment. As far as mixer routing is concerned, they tend to have lots of auxiliary busses for use when patching to effects cards or for sending signals to outputs.

The other category of multitrack recorder offers fewer professional mixing facilities, in exchange for a greater variety of sound creation tools, which come in the shape of built-in rhythm machines, bass synthesizers and loop samplers. Instead of serving budding studio engineers who need a product that will be compatible with professional studio gear, they have evolved to serve as an all-in-one machine for the home recording musician who has limited recording facilities and possibly very little outboard gear. Naturally drums and bass are not easy things to record at home, and neither is a loud electric guitar amp, so a multitracker with internal rhythm features and amp simulators helps enormously.

I hope this makes my reasoning a little clearer?

In Martin Walker's PC Notes column in the May 2005 issue, he says, "With a 15-inch TFT screen at its native resolution of 1024 x 768 pixels, you may find yourself squinting to read text and other fine details from three feet away", and then goes on to say a 19-inch monitor at 1280 x 1024 is perfect... but the dots are the same size on this and the 15-inch! So all the 'text and other fine details' are exactly the same size. Surely shome mishtake?

PC music specialist Martin Walker replies: I was using a 15-inch TFT display at 1024 x 768 up until a few months ago, and often found myself leaning forward and squinting to read text on it once I'd moved it three feet away to place it between my monitor speakers. However, after upgrading to a 19-inch 1280 x 1024 screen, I can now view the same information with ease.

My comment wasn't an oversight — I simply increased text size on the larger screen proportionally, both by changing Windows font sizes using the Advanced section of the Display Appearance page, and choosing larger fonts within word processing and other applications. Another approach is to click on the Advanced button of Windows XP's Display Settings page:, you can change the global DPI (Dots Per Inch) setting from 'Normal size (96DPI)' to 'Large size (120DPI)' or another 'Custom setting', which will not only scale up the font size but that of other Windows objects as well.

Since the 19-inch screen is nearly 27 percent larger than the 15-inch one, you can view exactly the same amount of textual information 27 percent larger without losing any content. Similarly, since most sequencer software provides both vertical and horizontal zoom functions, the actual pixel size becomes far less important, since you can generally scale the screen contents to suit yourself. Only those soft synths that have a 'fixed' pixel design using bitmapping cannot be altered in size. For me, the 19-inch screen does provide the best combination of screen size and native resolution for the price.

I liked your 'AW4416 Masterclass' features [see SOS May and June 2005]. I just wanted to point out that saving disk space by erasing silent parts in the middle of a track is possible. You have to first divide the track into regions, copy the regions you want to a blank track or virtual track and then erase the original track.