A lot can happen in 35 years. Start the clock in 1914 and it’s a period that encompasses both World Wars, the Russian Revolution, the Welfare State, the growth of radio and the birth of television. Count from 1960 and you cover the entire careers of the Beatles, Led Zeppelin and Nirvana, not to mention minor details like the moon landings, the building of the Berlin Wall and its eventual collapse. 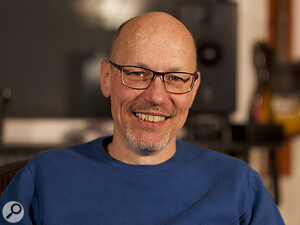 Sam Inglis.Photo: JG HardingThe 35 years since the launch of Sound On Sound have been equally turbulent, as Chris Korff’s timeline in this issue demonstrates. The magazine has had to weather many storms. SOS is and has always been independently published, without the safety net of an enormous multinational corporation to support it — but that independence is key to its staying power. Armchair critics on the Internet are quick to claim that all magazines are in the pocket of their advertisers, and only ever publish positive reviews. But in the 22 years that I personally have been at SOS, I have never once seen its independence compromised.

Does Sound On Sound publish critical reviews? Anyone who has read the last few issues cover to cover will know that the answer is yes. Some products don’t work properly; others offer poor value for money, are difficult to use, or just don’t sound very good. And you can count on SOS to point out all these negatives and more when they occur. What is true is that critical reviews are outnumbered by positive, but the reason for that is simple: manufacturers generally know what they’re doing, and try their best not to make bad equipment.

Magazines thrive only because people read them, and Sound On Sound has always been a trusted source of information, advice and entertainment.

Publishing a review that could cause a product to tank is not something that any magazine does lightly. Having witnessed the work that goes into creating something as apparently straightforward as a new plug‑in, I know how deeply manufacturers are personally and financially invested in their creations. But rest assured that, whatever the future may bring, Sound On Sound is and will remain editorially independent. How many YouTube vloggers and Instagram influencers can say the same?

Magazines thrive only because people read them, and Sound On Sound has always been a trusted source of information, advice and entertainment for everyone with an interest in electronic instruments and music production. Feedback from readers is one of the key things that guides us in producing the magazine, and whether your own feelings about SOS are positive or negative, we want to hear them. Email us at sos.feedback@soundonsound.com, contact us through Instagram or Facebook, or visit the SOS Forum at www.soundonsound.com/forum where editorial staff, moderators and expert readers are always around to offer a helping hand. As long as we can count on your engagement, Sound On Sound is set fair for another 35 years and more. Bring it on!