In this podcast Rob Puricelli talks to Ian Boddy, who has been a fixture on the electronic music scene for over 40 years, as an artist, sound designer and label owner. His label, DiN, celebrates its 100th release this month with one of Ian’s own creations, ‘Nevermore’.

Rob finds out more about this niche label, why and how it started, and how it still remains a relevant and popular imprint to this day. 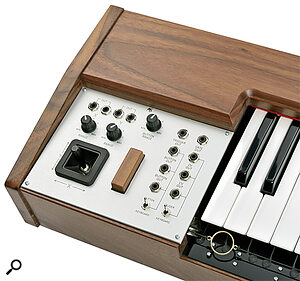 Having fallen in love with the sound-worlds of German electronic bands such as Tangerine Dream, he came across an arts centre that housed a studio filled with reel-to-reel tape machines and analogue synthesizers. Boddy taught himself how to use this equipment through a process of experimentation, thus began a long and successful music career.

Specialising in ambient and electronic music, Boddy has three main strands to his musical activities which are run under the umbrella of his own company, Something Else Music Limited.

Worked with DeWolfe Music since 1997 releasing over 20 albums with titles such as Waterworlds, Drones, Living Planet, The Unexplained and The Weather. In total this represents over 500 pieces which have been used extensively in TV, radio, film and documentaries in the UK, Europe, Japan and North America.

Although Boddy has been releasing music since 1980 his main focus since 1999 has been the DiN ambient electronica label. With the release of 'Nevermore' the label has now released 100 albums from artists such as Chris Carter, Robert Rich, Node, Tetsu Inoue, Markus Reuter, Erik Wøllo, Scanner and ARC. Boddy has performed concerts in the UK, The Netherlands, Germany and USA.

Update
Since this interview was recorded Ian has now released a new album, Modulations II, entirely created just using his venerable VCS3. This meant a lot of multi-tracking as well as using some modern Eurorack gear to give a helping hand with various Control Voltage sources such as sequencers, LFOs & envelopes. However, all the sounds were painstakingly created using just the VCS3 and with the use of vintage FX such as spring reverb, tape echo & analogue phasing the overall sound has a truly vintage feel.

Audio clips used in this podcast are taken from the DiN album, ‘Nevermore’, performed by Ian Boddy.

Rob Puricelli is a Music Technologist and Instructional Designer who has a healthy obsession with classic synthesizers and their history. In conjunction with former Fairlight Studio Manager Peter Wielk, he fixes and restores Fairlight CMI’s so that they can enjoy prolonged and productive lives with new owners. He also writes reviews and articles for his website, failedmuso.com, and other music-related publications, as well as hosting a weekly livestream on YouTube for the Pro Synth Network and guesting on numerous music technology podcasts and shows. Rob also works alongside a number of manufacturers, demonstrating their products and lecturing about music technology at various educational and vocational establishments.