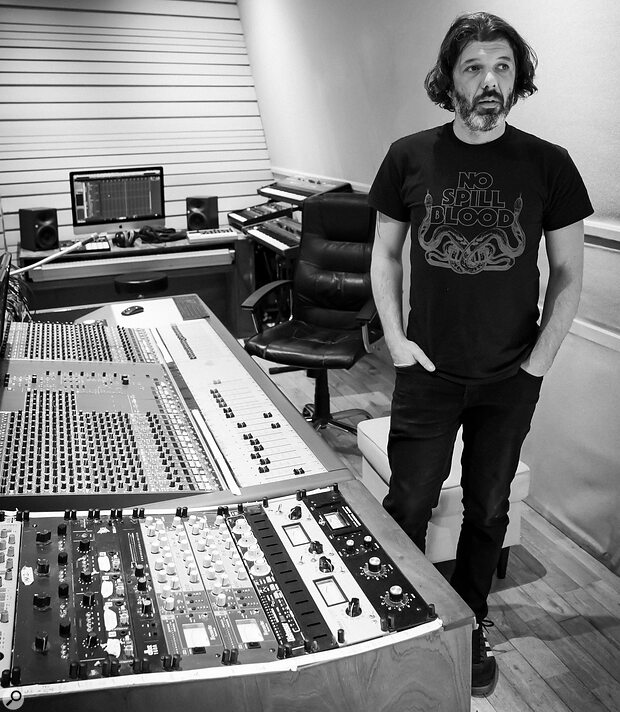 One of Ireland’s busiest producers, John Murphy applies his love of studio experimentation to noise‑rock and traditional folk alike.

“A lot of bands have this mentality of ‘It needs to sound like it does when we play live!’” says John Murphy. “I think they’re two different things, and I like to try and expand on the sound when making an album. Use the tools to the best of your ability, and don’t be cheesy with them.”

This philosophy has made John one of the most sought‑after producers in Ireland. It also got him his big break, with a Dublin four‑piece who have put a rocket under the world of traditional folk music. “I was recording a lot of noise rock bands at the start. I was involved in the underground scene and then got offered gigs, like independent music TV shows. That was when I first met Lankum.”

Originally known as Lynched, the band were already frustrated at having to conform to the expectations of a conservative audience. Murphy inspired them to throw convention to the winds.

“When I met them, they were doing the UK folk circuit, and the demographic would have been quite old. So if Lankum were to play one of their own songs, they might get a negative reaction to it, whereas any of the stuff that was very standard folk, the old people were loving it. I think that was definitely playing on their minds a bit, whereas I was kind of the mentality of, ‘Well, fuck them.’ Music, for me, needs to keep expanding and growing. You need to try new things and not just be stuck in the same rut, or trying to copy or emulate or whatever.

“Prior to that, I’d started to do lots of manipulation to acoustic instruments. I had been experimenting with layering different instruments together and messing with octaves, and different things like that. The first time I recorded Lynched, the performance that they did was really special. That evening I went back to the studio and started to manipulate the low end on the recording. When they heard my mix I think they were initially a little bit shocked, but then they really enjoyed it. They realised that it sounded good and unique, and went with it. And then when we started to record albums together, the same thing started to happen.”

It’s an approach that is heard to good effect on the band’s recent album The Livelong Day. Although much of the material is traditional and the instrumentation acoustic, John Murphy’s contributions help to craft a claustrophobic, oppressive sound world that is a million miles from your typical Irish folk album.

“On The Livelong Day, we were in a studio for 13 days for the first session. The first couple of days was getting the room sounding good for the core takes, and then after that, I just started to add chains of different effects. Then, coming towards the end of the session, lots of it was being tracked live with the chain in place, with everything kind of sounding as it should be. 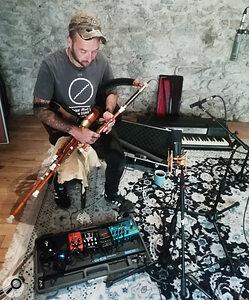 It’s folk, Jim, but not as we know it: Lankum’s Ian Lynch with uillean pipes and pedalboard.“Generally with all the stuff that we record, there’s a core take, which is a vocal and a couple of instruments, to get the feel of the song correct. And then we start to layer instruments on top of that, or overdubs. Lots of them will be real; the acoustic guitar will sound like an acoustic guitar, the fiddle will sound like a fiddle. But because it’s folk music, there’s generally no bass. You know what I mean? There’s no drums or bass guitar, anything like that, so there’s a huge area to mess with and turn things up in!

“The manipulation is mainly with the bassier instruments, like the harmonium, the bayan, which is a Russian accordion that Radie plays, and the uilleann pipe drones from Ian. I add a lower octave to a few things, and then heavily compress it and put it into reverb and that kind of thing, just to add weight and bottom to it, but then it’s always in parallel. So you’re holding the acoustic tones up high and then just having something bubbling underneath. And then lots of ambient textual stuff is recorded. Again, all kept very subtle. It’s just like building a kind of a structure around that core take, whatever instruments were included.

“I’m kind of synthesizing the acoustic instruments. I’ll put maybe three mics on the instrument, one close getting the proper low end, maybe a contact mic, as well as having a condenser and a room mic on it. And then with that really close mic, I’ll send that through a pitch‑shifter and into a dirty compressor, and then EQ all of the frequencies that are jumping out. I mess around with sample rates quite a bit as well, doubling the sample rate and adding artifacts to it, and again, EQ’ing it and just leaving the frequencies that complement the original.”

These techniques, explains John, work better when he can get reasonably clean signals from each instrument. This means there can be tension between the goals of minimising spill and getting a good core recording of the band playing together.

“I like to have as much separation as possible, because many instruments are quite different in volume, so there’ll be a lot of bleed. You’d have to use a huge amount of gain on certain things. So you get a lot of bleed from vocals coming in, et cetera. For the core take I would try to strip out as many instruments as possible and just have the driving instrument, or the rhythmic elements, I suppose, to keep the feel alive. And then, after the fact, overdub the rest of the instruments....