So what is there for a producer to do when a band is so well‑prepared and virtuosic? As with Lankum, Murphy’s first goal was to guide the band to produce the core take that could later be built on, in the case of Simpson, says John, “It was about giving him feedback on the take and just saying, ‘You did this in the last take. Maybe you should try and put that back in on the next take, I thought that was really cool.’

“The structures were there, the chords were there. Lots of the vocals weren’t there, and had to be kind of, not improvised, but Geordie experimented with different lines or whatever. There’s so much fluidity in their playing, I suppose they were bouncing off each other a little bit, but I think they had really rehearsed. They knew what they wanted to put down in that, and then we kind of orchestrated on top of that core take.”

John ‘Spud’ Murphy: Because it’s folk music, there’s generally no drums or bass guitar, anything like that, so there’s a huge area to mess with and turn things up in!

This process, says John, “was mainly just putting an instrument into their hands and saying, ‘Go in and experiment and see what happens.’ “I’d generally let them play through the whole song and then focus in on the sections that sounded really cool, and tell them, ‘OK. Yeah, this instrument sounds really good here. Let’s do a couple of things here.’

“I brought up a couple of weirder instruments for them to try out. There was an Irish and a Greek bouzouki, and lots of other acoustic instruments were used on it; even an Irish tin whistle! Generally the guys had a really focused vision of what they wanted the tracks to sound like. It was like trying to capture it as an ECM jazz recording or something like that, but then adding in extra production, to make sections really claustrophobic and hit you in the face, and then pull it back to just the core stuff again. The improvisation came in the overdubs, and the layering of different things. There was no click track used apart from ‘Hogwash’.”

The band’s virtuosity sometimes enabled them to realise Murphy’s production ideas in ways that wouldn’t otherwise have been possible. “I had an idea to emphasise the hi‑hat on ‘Dethroned’, because it was such a kind of dance‑y number. Morgan was into the idea, and I told him to do a really straight one, just to give it extra bounce and punch. He did a really straight one and it was absolutely perfectly in time with his previous drum take — no click track. And then he was like, ‘Oh, can I have another go? I have an idea.’ Then he did a really flamboyant one. And again, it was perfectly in time. And then he did one more flamboyant one, and I can remember him kind of laughing through the window and doing faces and ridiculous postures, but it was still perfectly in time. It was just phenomenal.”

Cavalcade was mainly recorded at Hellfire Studios, with mixing taking place at John Murphy’s own Guerrilla Studios in the same city. Located under a railway arch, it’s not intended to rival the big commercial studios, but to give John his own mixing space and offer an accessible recording option for new and alternative music. “The idea was to just have an affordable recording studio for all of the underground acts. There’s not really much money floating around in the underground music world over here, as I’m sure it’s the same in the UK, unless you get a label involved. But all the labels over here are kind of into the bands with lots of pop sensibilities. 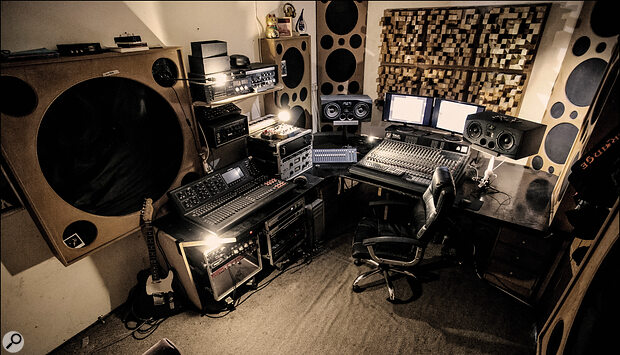 Murphy says a lot of overdubs will happen at Guerilla Studios for the new Lankum record.

“At the moment, it’s mainly based around a mixing room. I’m currently setting up a new mixing room at Hellfire Studios, but until that’s constructed, I’ll be mixing from here. A lot of overdubs will happen here for the new Lankum record, like vocal overdubs, percussion overdubs, and different production things. For lower budget underground bands, like the noise‑rock bands I work with, we will still record those in Guerrilla and track the drums live, with guitar and bass in through DIs, and have everyone on headphones. Then we would re‑amp the DI’d signal, or a lot of the time, re‑record the guitar and bass. With the band I play in, Percolator, we know the room really well, so we’re able to kind of take our time and get the exact tones that we are looking for.” 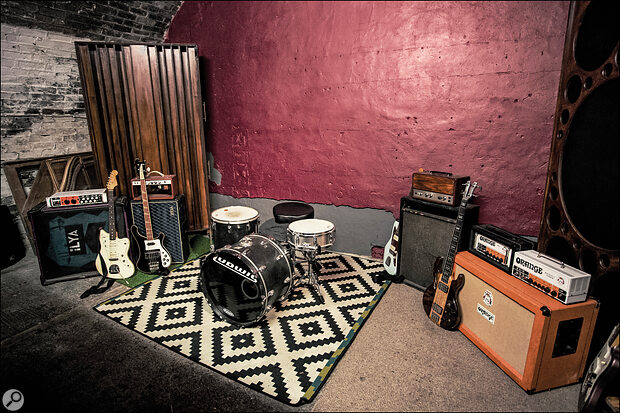 John Murphy’s own Guerrilla Studios is located under a Dublin railway arch.

Although the acoustics are unconventional and occasional takes are spoiled by passing trains, the studio is currently working overtime, with a varied selection of music awaiting release. “I’ve just finished an album for Rough Trade’s latest signing, Caroline. The new Lankum album is in progress. An album for folk duo Varo is also a work in progress. I finished a noise‑rock album for a band called Hands Up Who Wants To Die. I’ve just finished mixing the new Junior Brother record. I’ve almost finished the production of a new album of the female four‑part harmony group Landless and I’m starting another album with Ye Vagabonds up in Hellfire in the next couple of weeks.

“A friend said to me recently that every day is a school day. With sound engineering, that’s definitely a very true statement!”

John ‘Spud’ Murphy took a roundabout route to becoming an in‑demand producer. Having learned classical piano and Irish traditional music as a child, he turned his back on it for several years before joining a band as bass guitarist in his late teens. “There was always a bit of a dilemma every time we went into the studio, because it was really difficult to try to get stuff sounding the way you imagined it when you’re in the rehearsal room. So I went back to college and studied sound engineering for a year in Dublin. Then with the band that I was in at the time, ilya K, we won a competition and got 10,000 euros prize money, so we decided to go to the countryside and set up a studio to record our debut album.

“The album kind of did OK in the underground world in Ireland. Then some bands came and looked for me to record their music, and that’s kind of where it got going. This was when I was living in Cork, in the South West of Ireland.”

John’s next career move was an unusual one. “I found I was missing a lot of the music vocabulary needed to explain to session players what I wanted them to put down. In general, the bands that I worked with, they were all able to experiment and try new things and you didn’t hit a brick wall with them, but a lot of classically trained people, and a lot of jazz‑heads I was working with at the time, needed notes in front of them. So I went back again to college and studied a music degree in the Conservatoire in Cork, the Cork School of Music.

For someone who was often recording experimental noise‑rock bands, this was quite a culture shock. “The mentality in the School of Music was very strictly classical. The main reason I went there, as I said, was to learn about arranging, harmony and writing music for people. When I got into the arranging class that started in the second year, the first assignment that I was given was to put strings on a Brahms piano piece. So I went home and I wrote a string accompaniment to go along with it. I did what I thought would sound cool. I was really proud of it. I came in the next day to hand it in and the lecturer was like, ‘This isn’t what Brahms would write.’ I was like, ‘Yeah, I know, but I’m not Brahms.’ He was like, ‘Oh yeah, but you need to learn Brahms’ harmony.’

“I kind of hated that side to it, but I still learned.”