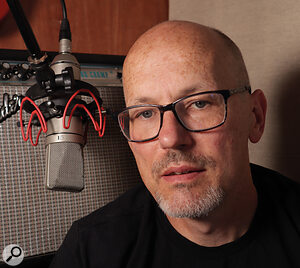 Many years ago, a manufacturer who shall remain nameless sent us two iterations of their new product. An initial prototype was followed, a few weeks later, by a production version. This in itself isn’t unusual, as we insist on reviewing exactly what our readers will be buying. What was less normal was that the production unit weighed twice as much as the prototype. A peek inside confirmed that the circuit board was exactly the same. They hadn’t added any new, massive components, or beefed up the case. They had simply bunged in some chunks of metal to make the production version heavier — reasoning, presumably, that buyers would associate a weightier unit with better quality.

If this sort of cheap trick leaves a bad taste, it’s mostly because it actually works. We like to feel that we make our equipment choices on the basis of how things sound rather than cosmetic factors. But if you take some time to think about it, that’s obviously not true, and nor should it be true.

In plug‑in design, for example, aesthetics and ergonomics often go hand in hand. Some might reach instinctively for a plug‑in that apes an SSL channel strip; others prefer an interface designed from the ground up to be mouse‑driven. And both might be right. Not only that, but they might use these tools to achieve sonically identical results.

At the end of the day, how a piece of gear sounds is no less subjective a factor than how it looks.

But even when we can separate the cosmetic from the functional, why shouldn’t the former influence our buying decisions? Studios are meant to be creative spaces, and as such, many people put a lot of thought into decoration and furnishing. Any equipment we buy is going to be part of that decor, whether we wish it or not. Design features that were once indicators of better quality end up becoming purely aesthetic preferences, and that includes size and weight. There’s no reason why a modern transformerless microphone made with surface‑mount components needs to be as big and heavy as a U87; but we’re used to large microphones, and their familiarity perhaps helps engineers and artists use them more effectively. And, at the end of the day, how a piece of gear sounds is no less subjective a factor than how it looks.

So I don’t think it’s shallow to allow cosmetic features to influence our gear choices. In fact, I think it’s unavoidable. But I also think it’s probably a good idea to be honest with ourselves when we do so. The more awareness we have of the motives that guide our decisions, the more secure we will be in those decisions, and the more we’ll enjoy using the gear we do buy.

Talking of which, doesn’t that new Arturia synth look great on the cover?