Mix With The Masters

The Men Behind The Brand By Paul Tingen 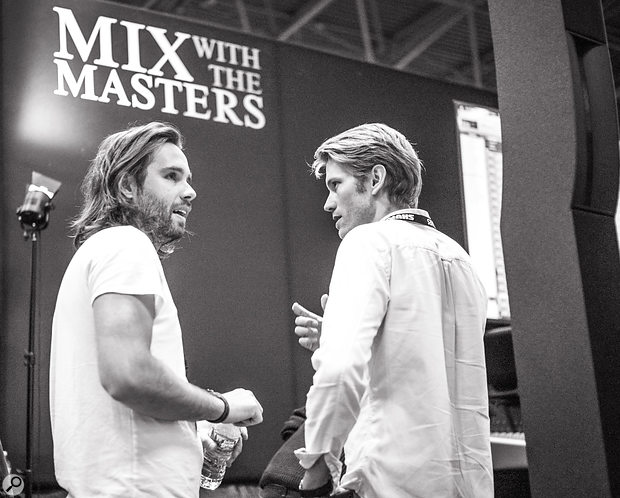 Sound On Sound talks with founders Maxime Le Guil and Victor Levy-Lasne as they celebrate 10 years of their Mix With The Masters engineer and producer masterclass programme.

This year Mix With The Masters — purveyors of fine mix engineer and producer masterclasses — celebrate their 10th year, and in March of 2019 also their 100th one-week seminar, featuring star producer Greg Wells. Over those 10 years, MWTM has established itself as the world’s foremost organiser of mixer and producer master-classes, featuring a hugely impressive roster of A-list studio alumni. Over the last four years it has also branched out into a very successful online presence, with numerous instruction and demonstration videos, and the possibility for members to interact directly with some of the featured studio masters.

MWTM’s 10-year anniversary prompts a look behind the scenes, to find out how the organisation became so successful. Talking from their Paris office, the company’s two founders, Maxime Le Guil and Victor Levy-Lasne, chart MWTM’s early days, and elaborate first and foremost on the value that continues to underlie everything they do: idealism. It all started in 2010, when le Guil, son of the owners of La Fabrique Studios in the Provence, reflected on his time in New York as an intern for top mixer Michael Brauer (John Mayer, Coldplay)…

We totally did not plan for it to become what it is today. I guess, really, that we were very lucky. But it was clear from the start that it was about human relationships and incredible passion for music, and for the people who record and mix the music.

“I wanted to go back to New York and see Michael again, but for various reasons that was not possible, so for purely selfish reasons I wondered whether how I could organise for him fly over to France for a week. I imagined that there’d be more people than just me who would want to learn from Michael for a week, and it made sense financially to do it in the form of a seminar. So I immediately thought of La Fabrique, and asked Michael what he thought of doing a weeklong presentation and look at it as an all-expenses paid holiday in the south of France with his family. I was 23 years old, and asked him to trust me, and to this day I’m grateful to him that he did.” 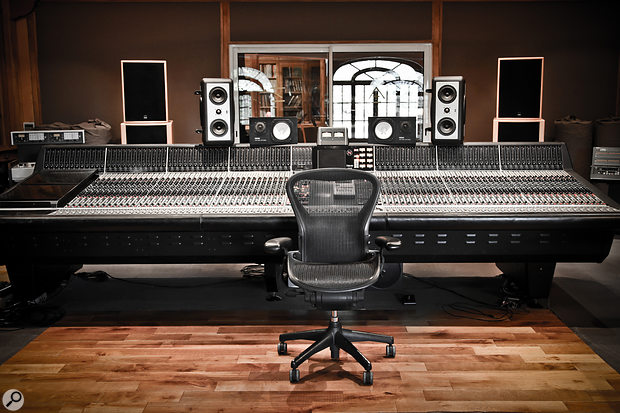 Realising that he would need to work together with someone to handle all the logistics involved in running the seminar, Le Guil asked Levy-Lasne, a former school friend, for help. The latter recalls, “Maxime and I had already worked together on a project at engineering school, and because he was busy taking over the old Plus XXX studio in Paris, he asked me to help out with organising and marketing. I designed the first logo and web site. We started promoting the seminar online, and we had a global reach right away, with people from as far away as Brazil, Canada and Australia signing up that first year. In fact, the seats sold so quickly, that we decided to do two seminars that first year, the other with Michael and David Kahne.” (Paul McCartney, Lana Del Rey)

"The best week of their lives!"

Surprisingly, perhaps, the blueprint for the MWTM weeklong seminars was already laid during those first two weeks with Michael Brauer. “We spent substantial time with Michael devising a template for how to run the week,” Le Guil says. “He put a lot of thought into that, and drew on his experience of training many assistants to help devise a program that would see the guest speaker not only demonstrate his mixing and production techniques, but also talk about the business side, and that would involve material brought in by the participants too. It worked really well, with people being able to their meet their studio heroes in a way they had until then only dreamt of. The emotions were so great that people were crying at the end and saying they’d had the best week of their lives!” 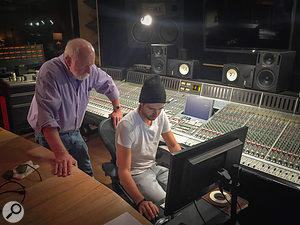 Before MWTM, master classes with top mixers and producers were a rarity, though yours truly can lay claim to having organised a dozen one-day studio workshops in the late 1980s, with celebrity mixers and producers of the day like Hugh Padgham, Rupert Hine, Mike Pela, and others, sharing their know-how. Today, perhaps inspired by MWTM, seminars, master classes and video interviews with the studio elite appear to be everywhere, but undoubtedly, the French company has taken the concept further than anyone else, and with admirable success. Yet, in 2010, Le Guil and Levy-Lasne were not thinking that far ahead.

Le Guil, “At the time we really thought the seminars with Michael and David Kahne were one offs. But because the reactions had been so strong, we suggested to Michael to do it again the next year, and he and David also enlisted Andy Wallace. That’s how it continued to roll. We’ve developed and customised the program since then, depending on the guest speaker we have, but the original template remains similar to the one that Michael designed for that first session.”

“Since then, Victor has been instrumental in making it all work as an actual business, and he’s still doing the logistics, the finances, and the web site. I’m less hands-on, because I also work as an engineer and producer in my own right. I am more involved on the strategic side, deciding with Victor where we go next and what guest speakers to invite. I’m grateful for Victor’s input, as I would probably have spent all the money on renting gear for the first seminars, and would not have managed to make the seminars last beyond the first year!”

Levy-Lasne also stresses that Mix With The Masters was not at all the result of some kind of grand, commercial, money-making business plan, or in fact, of any plan. “MWTM grew organically from the beginning. We did one event, and then it was ‘oh, that was great, let’s do it again.’ And we did it again, and again, and then it became a thing. But it was not because we planned to make it a thing.” Le Guil adds, “It’s a weird thing to say that we totally did not plan for it to become what it is today. I guess, really, that we were very lucky. But it was clear from the start that it was about human relationships and incredible passion for music, and for the people who make the music and who record and mix the music.”

In addition to the generally euphoric reactions from the course participants, the presenters themselves also often declare their week(s) at La Fabrique as amongst the best of their lives. For example, Jack Joseph Puig (Green Day, John Mayer) called it in an e-mail this writer, “an incredible experience for all!” Clearly, there’s no doubting the idealism and enthusiasm for the studio metierthat’s at the heart of the MWTM seminars. However, to give anything a physical shape and continuity, idealism and enthusiasm rarely are enough, and Levy-Lasne takes some time detailing the other ingredients that have been essential in the company becoming what it is today.

First of all, he says, MWTM is very much of its time, specifically of “the digital age. Although we initially only presented a physical event, the seminars, we could promote them with a global reach thanks to the Internet and to social media. What we do is also related to the decline of the studio industry, the fact that big studios are closing down everywhere, and studio know-how is in danger of getting lost, which is the result of the digital age as well. Most of the masters work in smaller studios now, with far fewer people coming through, which don’t have that culture of family and passing on knowledge that used to be at the heart of commercial studios. A positive effect of the Internet, by contrast, is that it spreads music around the world, and makes it possible to share all the know-how with a wide audience with a thirst for first-hand knowledge. Our seminars cater for that thirst.”

Another reason why MWTM has become so successful is the absolutely magical location of La Fabrique, set in gorgeous, picture-postcard Provence countryside, and located in a huge early 19th century farm with a rich history—for a while it produced the red dye for the uniforms of Napoleon’s army. The idyllic building has enough rooms to house all 15 course participants and the presenter, the grounds are large and include a pool, there are great chefs preparing the meals (as one would expect in France!), and the main studio where the seminars take place is enormous. It can easily hold 30 people, making it all the more impressive that Le Guil and Levy-Lasne decided to limit classes to 15 participants. In fact, they don’t only limit the amount of participants, they also, in conjunction with Brauer, decided right from the beginning to screen potential participants. 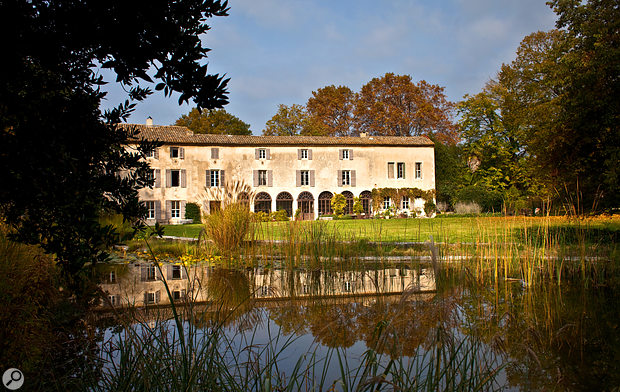 Le Guil, “Michael agreed to doing the first seminar on the condition that he would only work with people who had five to ten years of recording and production experience, so they already knew what they were doing, and would be able to relate to what he had to say. That immediately became our target audience: semi-professionals and professionals who were already successful, but had hit a wall and did not know how to get to the next level. They’re not only looking for technical insights, but also business insight, learning how to handle projects, run a career, and for general inspiration.”

“We wanted to keep the seminars small-scale and intimate. Coming to La Fabrique is a week of bonding, having breakfast, lunch and dinner together, and so on. It’s an 18-hour per day experience for seven days. Victor and I have always aimed at 100% satisfaction: it has to be the perfect week. Because of the small groups, and the selection process, we have managed that so far. We’ve never had anyone dissatisfied with the seminars, and we’ve had over 1200 participants! Quite a few people come back several times. We had one guy who came back nine times! The presenters are also very grateful for coming, because they say it forces them out of their studio, and many of them have come back repeatedly as well.”