Though software-based recording has become the norm for a large number of musicians, I'm sure that the majority of those musicians would be quick to agree that the current situation is far from perfect, regardless of what software they run or which computer platform they run it on. Indeed, I suspect that the majority of people who use computers at work feel a little let down by the promise of the paperless office, because even in the rare instance that the computer has cut down on paperwork (and I've yet to see much evidence of this), the clutter that used to be on your desk has somehow managed to migrate onto your computer desktop. I've noticed that people who are habitually tidy in the 'real' world also tend to be tidy in the virtual world, but the rest of us often find it difficult to keep our files in optimal order — I'm often staggered at the number of duplicate files I find when I do a search. 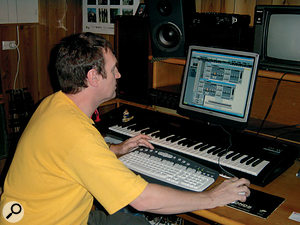 Some music software packages are more helpful than others in helping you keep all the files associated with a project in one place, but in my experience you still need to exercise organisational discipline if things aren't to go astray. For example, in the software I use, unless you consciously create a file name for the audio tracks you are about to record, they are given titles based on the name of the last job you did: on more than one occasion, I've recorded an artist and then later discovered that all the audio files associated with that project are called 'School Christmas Concert' or something equally irrelevant. You might also find that you open an earlier project to add some parts and in the meantime you've changed the audio record path to a different folder, so unbeknown to you, all the new parts you've added don't end up in the project folder you might expect, but in some obscure folder relating to another song entirely, which may not even be on the same hard drive. If you were to ask me now what I'd like for Christmas, it would be a piece of software that could work through all my songs, turn them into project folders containing everything they need, then back them up to another drive. Cyber Secretary might be a good name for it.

I know that a lot of these problems could be avoided by the operator (namely me!) being more careful and better organised, but when you get an idea, you need to be able to hit Go and start work without having to worry about file names, storage destinations and other arcane matters. Creating a project and giving it a name should be enough. I'm sure that software designers could make this easier for us by assuming a default condition where the results of any work done after the creation of a project are always stored in the correct project folder with the project name as part of the audio file names. Similarly, any samples or other related files stored in a project should always be searched for in that project folder before the computer takes it upon itself to start looking around the rest of your hard drive real estate.

While I'm in rant mode, I'd make it a hanging offence for anyone to write operating systems that put up dialogue boxes that don't inform you of what you need to do to get out of the current situation. Meaningless error messages of the 'Sorry, Dave, I'm afraid I can't do that' nature are just unhelpful and irritating. So rather than software designers competing to see how many flashy features they can add, can we first please spend more time on stability, clarity of operation and better automated file organisation so that our computers behave more like efficient secretaries and less like the plot of a Dan Brown novel?