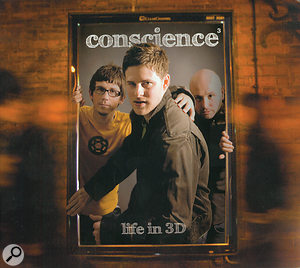 Conscience Cubed aren't interested in just sounding good: they want to change the world. Their album Life In 3D therefore "presents a musical manifesto for a fuller life”. Since they implement this manifesto by creating bland, commercial AOR, it's tempting to speculate that the fuller life they have in mind is that of their own bank accounts; at any rate, listeners seeking the key to ultimate wisdom and happiness are likely to be disappointed by lyrics like 'There's a place for you there / You didn't come from thin air'.

They are honest enough to admit that their music is heavily influenced by Coldplay and Athlete, although their assertion that they "end up with our own unique sound” is not quite as self‑evidently true. The playing, recording and mixing are, by and large, pretty good, but in this monstrously competitive field, 'pretty good' doesn't sell 16 million copies, and there are things they could work on. In particular, singer Matt Phelps needs to work on his pitching. 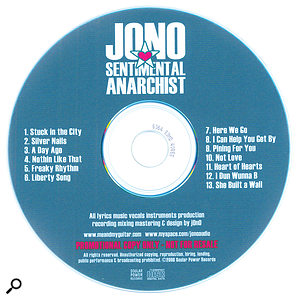 Self‑recorded, self‑played and self‑released, Jono's album exudes a brash confidence from start to finish. Subtle it ain't, but Sentimental Anarchist pushes his songs right into your face and keeps them there. Fortunately, he has both the ability and the hooks to sustain such a frontal assault, even if he does milk every catchy phrase for all it's worth. Sam Inglis 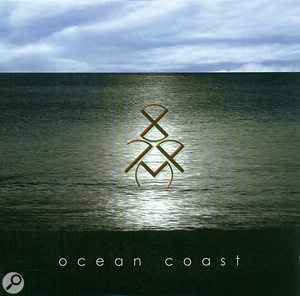 A concept album about the oceans? Yes, got it in one, it's ambient music. And criticising ambient music is a bit of a challenge, like trying to inflict punishment on a masochist. Usually, for instance, I would hesitate to describe the fruits of someone's labour as 'background music' or 'aural wallpaper', but presumably, if you make ambient music, you take that sort of thing as a compliment.

I'm not someone who really gets on with the idea of aural wallpaper, but even I can see that this is aural wallpaper of a high class: there's none of your sonic Artex here. The smoothness that allows this music to slide into the background so readily is the result of clever synth programming, creative guitar sounds and skilful mixing. It's just a shame the ocean theme is so predictable and over‑familiar. Perhaps ambient music is intrinsically, well, wet. Sam Inglis

Let's Move Out To Mars 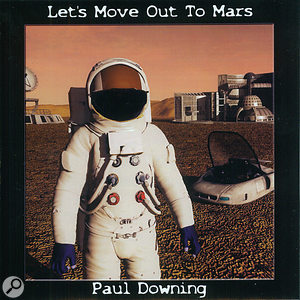 Something about Paul Downing's music sounds incredibly familiar, yet I'm lost for obvious comparisons. It's very friendly on the ear and beautifully recorded, with plenty of space in the mixes. Paul has an excellent voice and the vocal technique to get the best from it, and the overall high standard is all the more impressive considering he played nearly all the instruments himself. There's an '80s MOR flavour to some of the arrangements, but thankfully, that doesn't mean an abundance of gated reverbs or cheesy synth pads. The album as a whole would perhaps benefit from greater variation in tempo and mood, but all in all, a fine effort. Sam Inglis 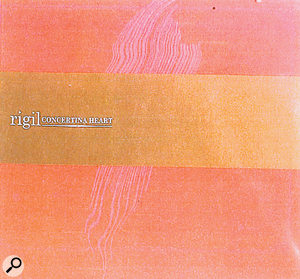 Rigil's "ambient pop” comes garlanded with laudatory quotes from fanzines so obscure I'm slightly sceptical as to whether they exist at all. And as you'd expect of music that leads people on the Internet to write things like "a guitar splinters the space into ever escalating degrees of subtlety”, it straddles a fine line between the thoughtful and the comically pretentious.

Musically speaking, it's all about the atmosphere: sinister drones, spy‑movie guitars, crunchy lo‑fi pads and weird vocal effects dominate, playful humour is not abundant. It probably took a very long time to make. I'd be impressed, only I have a nagging feeling you can achieve the same effect fairly instantly using the random patch generator in Humanoid Sound Systems' Scanned Synth Pro. Sam Inglis 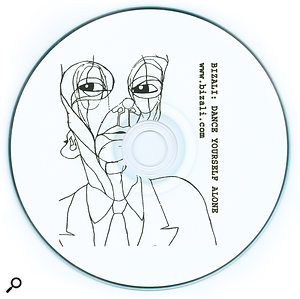 Never trust an emotional rollercoaster, that's what I say. They always break down in floods of tears, just when they should be sending you on a thrilling corkscrew descent. And don't get me started on melancholic helter‑skelters, or over‑sensitive dodgems. What you want from a fairground is entertainment, pure and simple.

If you feel the same way about music, Bizali's "emotional rollercoaster” of an album probably isn't for you. Although their sound clearly owes a lot to dance music, it's mostly based on live playing, and dancing is likely to be the last thing on any listener's mind. There's more than a touch of the Beth Gibbons about singer Blythe Pepino, who rarely turns the intensity dial down below 10. Her voice wafts over sparse musical arrangements driven by drummer Daisy Palmer, who produces a broad array of jerky and disjointed beats. They're at their best on 'Cogs', when the coldness of their basic sound palette is tempered by some lush strings; elsewhere, it can seem a little too dry and over‑thought. Sam Inglis 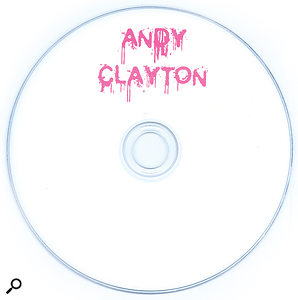 Andy has a great, modern, radio‑friendly rock tone to his voice, and plays a modern post‑punk‑emo‑pop fusion that is well constructed. The record is well produced, with only some over‑sharp cymbals detracting from a solid sound. Style jumps from neo‑classical, double kick‑pedalling emo‑ballads to Muse‑like rock quite well, but what lets Adam down is marketing such a band sound as the work of a solo all‑rounder. Far from making him seem like a virtuoso, it conjures up an image of meticulous and lonely composing in a bedroom studio, which doesn't match the full‑on musical style at all. Jules Harding 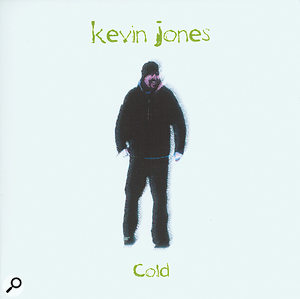 Nicely procuced pop music with a '90s feel, 'Helpless' reminds me of This Is My Truth...‑period Manic Street Preachers in places, while 'Cold' has a world‑music feel, complete with warbling tribal kiddies. The sound is a little plodding and unfocused for my taste, often drifting into MOR cheese, and a lacklustre lead vocal unfortunately lets down what is a genuinely accomplished mix. Jules Harding 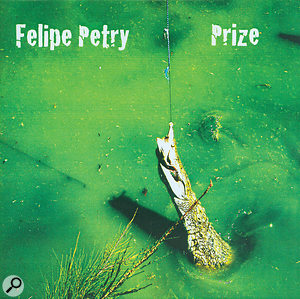 Felipe Petry is "an experimental/psychedelic/rock bass player who decided to translate his bass‑playing experiences into songwriting, and singing.” By the sound of the album, bass playing can be a rather unsettling experience, with primarily off‑key vocals in a pair of languages battling with an angel dusting of keyboard layers, brass and strings. Luckily Petry doesn't appear to take himself too serously, and the brain‑bending '60s trip fodder that results from his bass odyssey can be enjoyable in casual‑user doses. Jules Harding

A Little Bit Of Something Else 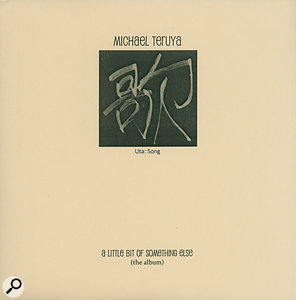 Truly, we live in a global market. Michael Teruya's album comes all the way from Honolulu, yet it kicks off with what might as well be exactly the same waves‑crashing‑on‑a‑beach sample that begins Ocean Coast's album. His goal is rather more ambitious, though: he seeks to develop a new Asian‑American music, combining elements of Japanese folk song with soft synths and a vocal style that might politely be described as individual.

It's an interesting project, but at the moment, it's being held back by Michael's limited production skills. Something is awry with a gain structure in which noise is almost as prominent as the recorded voice, and his acoustic instruments boom in the way that such things do when miked directly in front of the soundhole. The tracks that are more electronic in nature fare better, but he should be able to find vastly better string and synth sounds these days. Still, as ever, the ideas are the most important part of the music, and there's no shortage of those! Sam Inglis 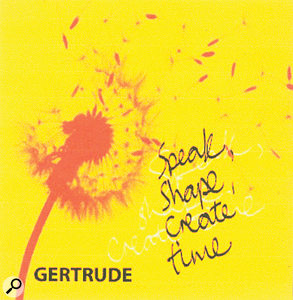 Sounding remarkable considering that it was recorded in a squat, Gertrude's post‑punk mash‑up leaps from playful to frightening in a schizophrenic manner, but never feels too contrived. At its best in the sparser moments of tracks like 'Doing Dangerous Things', I'd have liked to hear Gertrude's music with production that's either more commited to lo‑fi or sharper, and expanding on the introverted and subtle moments that are the album's highlights. Jules Harding 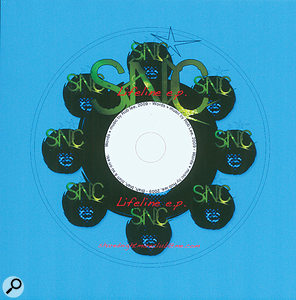 Rob Lee's demo is accompanied by a lengthy essay touching on its gestation, his baroque approach to collaboration, the new style of guitar playing he's invented, Korean cinema and the history of the Khmer Rouge regime in Cambodia. I guess that's what happens when you idolise Luke Haines. At least Luke Haines is someone worth idolising, though personally I wouldn't take it to the extent of borrowing the infuriating 'ping' synth sound with which he decorates many of his songs.

Rob's music also incorporates various electronica influences, which on the one hand adds plenty of variety and interest to the sound, but on the other, makes many of his lyrics completely incomprehensible. Which, if you want to know more about Korean cinema and the history of the Khmer Rouge regime, is a pity. Sam Inglis