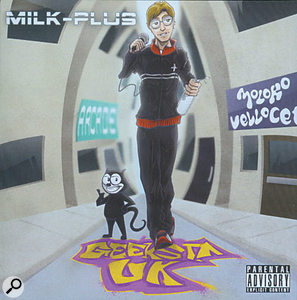 If you're the sort of person who always secretly rather liked hip-hop, but felt just a little too bespectacled to relate to it, you're in for a treat. Nerdcore is something of a revelation to me. If you'd asked me, I'd have guessed that there probably was a Wikipedia page devoted to the genre, but I wouldn't have guessed that the likes of Milk-Plus were out there 'songfighting' about Star Wars and holidays in Devon.

There's a certain old-school quality to this, with ska beats and Beastie Boys-esque instrumentation. I felt that this was initially over-used and off-putting, with the first track being perhaps not the most appropriate opener to the album, and actually quite unlike the rest of the record. However, it soon settled into the clean and slick production that characterises Milk-Plus' output, and you can certainly tell that he's a jobbing producer by day.

The lyrics are a particular treat, with gems such as 'I'm gonna turn my music down, that's how we get down', and 'Sitting up a tree with a… jam sandwich!' cropping up with pleasing frequency.

I can't say I'll return to Nerdcore with particular regularity, but I do feel happy knowing that it's there, and Milk-Plus seems an appropriate ambassador for the UK scene. Nell McLeod 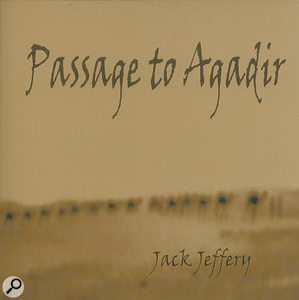 There are some questions that should never be asked. Like, for example, 'Where's the Ambient Jam?' Is Jack Jeffery's instrumental asking directions to a venue where musicians compare rainsticks and trade arpeggiated Wavestation pads? If such a place exists, we should be told. And the Licensing Act should be revised, pronto. Or is he lamenting the fact that no-one has yet arranged 'Down In The Tube Station At Midnight' for temple bell and native American flute?

Either way, ambient elements do crop up in Jeffery's music, but the overwhelming influence is Pink Floyd. Along with producer Alan Parsons, each member of Floyd is thanked individually, and there are plenty of moments where Jeffery has obviously tried hard to copy the production style of his heroes. In doing so, he's produced a perfect demonstration of a very important truth: applying psychedelic effects doesn't mask flawed recordings, it just makes the flaws more obvious. For instance, if you put a delay on a spitty vocal, you just end up with twice as many spitty esses. If you then put a reverb on the delayed spitty vocal, you end up making each spitty ess go on that much longer... and so on.

In short, the reason why people admire Alan Parsons' work is not only because of his use of delay and reverb. It's because the sounds that he applied the delay and reverb to were beautifully recorded in the first place. And if you can't achieve a certain level of quality in your basic tracks, you'll never hope to match Pink Floyd's production aesthetic. So, while Jack Jeffery has clearly put a lot of effort into tweaking his effects patches, he'd have been better served by taking more time over his mic choice and placement. It probably goes down a storm at the Ambient Jam, but unfortunately, it doesn't quite cut it on CD. Sam Inglis 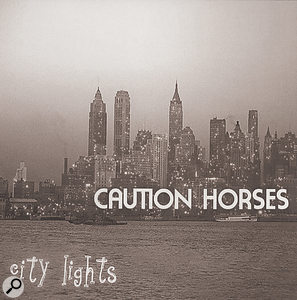 Caution Horses have been playing together in some form since 1990, and City Lights is their third release during this period. It certainly isn't excellent, but does have some well-constructed songs, nicely arranged. Most of these are predominantly guitar driven, but also feature synths, as well as piano, trumpets and flutes. The sound could probably be best described as something like 'light rock,' and rarely breaks too far away from this comfort zone.

The vocals are quite soft and nasal but tie in well with the rest of the music, accompanied by useful backing vocals. Throughout the record, I had the feeling that the drums were simply not providing enough presence to the songs, leaving them a bit flat and without any real punch. There are a few guitar solos throughout but, for the most part, they're relatively uninspiring and don't really seem to be serving much of a purpose. Although there are no real stand-out tracks, the CD does make for pleasant listening and offers something simple, yet quite effective. Rob Craig 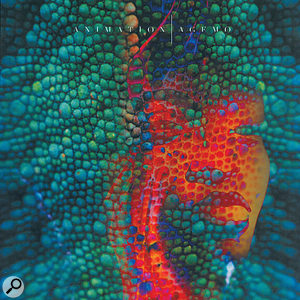 The sleeve notes of Agemo instruct you in no uncertain terms that it must be listened to on headphones. Presumably this is because of the "three-dimensional headphone listening experience” that they're aiming for, "the likes of which most listeners will never have experienced before”. Unfortunately, there's no getting away from the fact that what this basically amounts to is panning.

Agemo appears in the pages of SOS by the skin of its teeth, as I almost dismissed it as an experimental art piece, rather than a demo. A demo of experimental, free-form jazz, to be disappointingly straightforward about it. There's some funk thrown in for good measure, of course.

In terms of knowing what you're going to get, no further explanation should really be necessary — except that what you actually get is far more interesting than I make it sound. I'll let you decide for yourself whether that's because of the arcane goings-on of the '3D listening experience' or simply the particularly funky rhythm section and tireless soloists. Nell McLeod

Taste Music With Your Ear Tongue 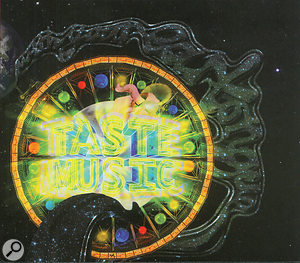 Whistling, clapping, harmonising indie-ites the Badje have found something they like doing and they're sticking to it. With big drums, confident, sassy vocals and a jangliness that resists twee, this is exciting and fun. They've thrown everything in for good measure: melodicas, harmonics and occasional silliness, and it works brilliantly. At times feeling like it could be coming from the late '60s, in reality it seems to be reviving a genre of the last 10 years that had already gone through that process. Imagine the Brian Jonestown Massacre if they weren't dysfunctional. I suggest giving it a listen and drawing your own conclusion on this particular mixed bag. Personally, I think it's funky, original, funny, and highly recommended. Nell McLeod 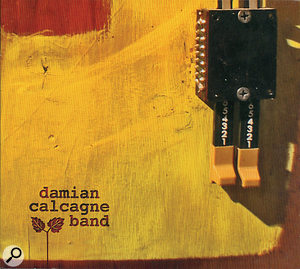 This self-titled debut release from this New Jersey-based alt-roots group is interesting and enjoyable throughout. Each of the nine tracks offers something a bit different, and displays very good musical chemistry and ability. Accompaniments in the form of horn sections, violin solos and even a wah-sax solo provide strength and depth to an already solid line-up. Energetic and melodic guitar sections are complemented very nicely by bass, drums and a Hammond B3, helping give the songs an extra dynamic. Despite this large line-up, the tracks never appear messy or overcrowded, with everything performed nicely in moderation. Their stated influences are recognisable throughout the CD and include acts such as the Band and Ray LaMontagne.

The writing style and lyrics of founding member Damien Calcagne are poetical and he sings very well. The vocal range used is expansive, with some nice harmonies thrown in for good measure. The band also have the ability to give that something extra when required, or, alternatively, to take things down a notch. My only criticism would be that each song drags on a little, leaving a slight feeling that some of the longer guitar sections may not be completely necessary, or could be trimmed down somewhat. Other than that, a very good job. Rob Craig 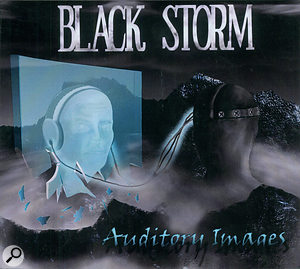 A choir-leader friend of mine maintains that there are three things, which we all do as a matter of course, that singing can be based on: shouting, weeping and speaking. Theoretically, speaking can form the basis for a very traditional style of English singing. It's the kind of technique whereby, if you were paused mid-sentence, you'd find that your vocal cords had landed on a specific note. However, this isn't to say that each technique lends itself to any genre, and there are some that, whatever you think about musical fusion, just need a bit of sobbing and shouting.

Brian Walker, the lone-ranging creative force that is Black Storm, employs this 'speaking' style throughout this record. It's tuneful and in tune, he doesn't swallow his words and the timbre is completely inoffensive. But Auditory Images is straight-up rock music and, as such, it really feels like it needs a performance with a little more emotion.

This lack of real soul is a theme of Black Storm's album. A not insignificant number of instruments are present here, all played by Walker, with universally accomplished performances throughout, and I suppose that rawness is what's missing; you certainly don't get the feeling he was in any rush to complete this. Rather, he had the time to polish much of the life out of the production, leaving it feeling a bit limp.

This whole project hints at some real ability, but I'd like to see what he could come up with if you gave him a two-week deadline. Nell McLeod 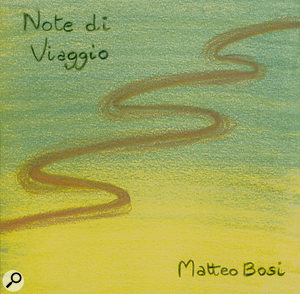 Quite literally a labour of love, Note Di Viaggio is Matteo Bosi's musical tribute to his girlfriend, Costanza. It's an entirely instrumental, one-man effort, complete with noodling guitars, piano sounds of every persuasion, and more pedals than you could easily shake a stick at. With climactic orchestral moments going off all over the place, we can be sure that Costanza is quite a woman.

None of this is what you'd call bad. Indeed, it's the work of someone with instincts natural enough to improvise convincingly for 25 minutes. However, the five tracks on the record give no indication of being independent from one another, and there seems to be no real reason for presenting them as separate entities.

I think with some considerable musical direction, you might find you had a decent session musician, whose penchant for 'Parisienne Walkways'-style solos might just come in handy. But, in reality, you're probably more likely to hear it the next time you're boarding a plane. Nell McLeod