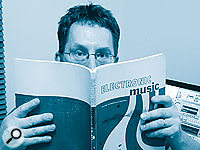 About The Author: Derek Johnson has recently taken to contributing to SOS from a country largely populated by sheep. He can often be found with his hooter scraping away at some book or other.

It's clear from flicking through the pages of SOS that modern music technology has much to offer. But it also has much to answer for — not least allowing any Tom, Dick or Harry to have a bash at being a musician; given a pile of loops and beats, the newcomer doesn't need to know anything about music.

There's definitely a bad side to this situation, but let's not forget the plus points: it's helped to unearth some instinctive, untrained musicians with good ears, who manage to find the right bits that work together, and who discover an intuitive approach to grooves, harmony and melody. Then there are the 'producers' who employ filters and other classic timbral processors to produce a dynamic audio experience that doesn't even have a 'proper' melody. Nevertheless, in most cases, something usually tickles the ear in the same way as a tune would.

We all know that the computer-based musician can get off for hours at a time developing a loop, but when it's played to an audience, listeners are often bored (even if they're too polite to say so). Perhaps the track is played in a club environment, where there are 300 intoxicated people prepared to dance to your material, but even in those situations, it's the tracks that build to the simple-but-epic tune that get the arms in the air.

If you're struggling to get those memorable elements into your music, here are a few tips that may help you progress:

I have one final suggestion, but it requires rudimentary music reading and writing skills, such as knowledge of note names, rhythmic values and basic harmonic relationships. If this is you, read on.

Hunt down a copy of Composing Music: A New Approach by William Russo, with Jeffrey Ainis and David Stevenson (University of Chicago Press). This handily spiral-bound text has been around for nearly 25 years, but remains relevant in many contexts. As the book's blurb says, Composing Music is aimed at those who have some knowledge of music but no formal training in composition. It offers a concise introduction to composing, starting with a brief composition exercise, then proceeds step by step through a series of increasingly complex problems, gradually expanding the student's musical grammar.

The book is largely style-neutral, though it's been developed from college music courses in the US. The best bits for our purposes are the sections where you're directed in the creation of melodies. Blank music score is often provided on the page, so you can write down the music you create from the start. It's hard to use this book without composing as you go. Restrictions are at the heart of the exercises, right down to the notes and rhythms at your disposal in the early examples. Reducing the infinite possibilities of music really helps you focus and get to grips with whatever concept is being presented to you. As an aside, the restrictions help you to develop the discipline necessary to become a productive composer.

The book moves into harmony, but there are large chunks on creating and developing themes, then a little on counterpoint and other techniques for extending your music. It might get a bit heavy for the complete novice, but is still one of the best 'teach yourself' texts I've encountered.

Moving back to the studio after working with the book for a while, you may find that your ears have a new relationship with your grooves, and that you add melodies that seem to mean something. The discipline of working on paper often helps your improvisational ability.

Assuming you've digested much of the book, you could find yourself crafting a track using both your hi-tech desktop setup and a pad of manuscript paper. If so, try this: sketch out a groove's chord sequence and use your new skills to create the top line. If you're trying to turn your grooves into something more involved — that works to moving pictures, for example — this dual approach (and your new self-discipline) will be invaluable.