Sounding Off: Use Your Brain, Not Your Mouse

Use your ears, not your eyes. Use your brain, not your mouse.

I’m getting worried now. It started when a friend’s son innocently asked if I knew of a plug-in which displayed the frequency content of audio signals. When I asked why he needed it, he explained that he wasn’t confident his music tracks contained the right balance of frequencies, so needed visual confirmation. I said the usual things: rely on your ears, listen carefully on headphones as well as on a decent pair of speakers, but he didn’t seem entirely convinced. 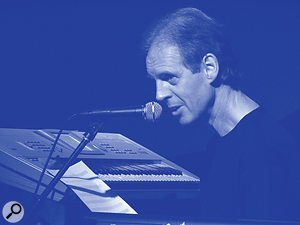 Another warning sign was a music professor’s story of a student who claimed he could play a well-known song on keyboard: when asked to demonstrate, the ‘performance’ consisted of a series of one-finger key presses which triggered preset MIDI files. Then there was the young video maker who, during a filmed interview with drummer Gavin Harrison, became interested in his concept of ‘rhythmic modulation’ (a way of creating a mathematically related tempo change by subdividing the quarter-note beat of a passage by accenting, say, every third 16th note, then treating the accents as if they were a new 4/4 beat). Having heard Gavin expound on this rhythmic brain-teaser, the interviewer enquired, “Is there an app for that?” (The answer is, “Yes — it’s called a calculator.”)

A recent SOS Workshop article confirmed my fears. Based on the notion that composing in a specific key or harmonising a chord sequence can be tricky for anyone who hasn’t attained a “Grade 8 in music theory or an encyclopaedic knowledge of scales and chord progressions”, it outlined an ingenious, convoluted way of using various Logic features to auto-transform a MIDI sequence in C major into the key of A# minor, complete with random melody variations in the new key.

Call me old-fashioned, but I felt a more musically instructive approach would be to figure out two or three simple chords in the key of A minor (which conveniently uses only the keyboard white notes), play them into Logic, cycle the sequence, work out a tune by trial and error (either by fumbling around on an instrument or by singing and/or whistling), record your tune and then transpose everything up a semitone from A to A# with a couple of mouse clicks. Believe me, you don’t need a Grade 8 diploma nor an encyclopaedic musical knowledge for that.

The final nail in the coffin was an article in the US magazine Keyboard describing how to inject space into chord pads by distributing notes over multiple octaves. Good advice, but I objected to the article’s description of anyone familiar with such techniques as a “music theory Ninja”, implying that only advanced musical geniuses can experiment with chord voicings. The article was subtitled “Enhancing your chord progressions without resorting to EQ”, which suggested that it’s become commonplace for DAW users to reflexively opt for a sonic fix before considering the fundamental musical question of what notes are used in their chord pads.

It concerns me that software tools are now seen by some as the default first-choice solution to every musical problem. This seems like putting the cart before the horse. Though I’m all for using technology as a means to enhance creativity, the danger is that an over-reliance on technical aids will rob young musicians of the initiative to learn a few basic musical skills which they can later build on, resulting in a generation of musical ignoramuses.

I offer this heartfelt advice to musicians of all ages: don’t be afraid to learn some simple playing skills and a modicum of basic theory. It’s not very difficult and it does wonders for the self-confidence. There’s no need to learn abstruse jazz chords or use notation but, in my experience, mastering a little musical craft and applying your imagination will get you a lot further than fiddling around with plug-ins. Use your ears, not your eyes. Use your brain, not your mouse. Work at it. You don’t have to be a musical Einstein, but sadly, if you spend your life relying on technical crutches rather than learning a few hands-on, entry-level musical principles, I’m afraid your music will always suck on some level, and no app can help with that.

Dave Stewart is a UK keyboardist, composer and author who works with the singer Barbara Gaskin. He has written for SOS (while resting between engagements) longer than any of us care to remember. He gave up piano lessons after Grade 3, complaining, “The black notes were confusing me.”