The Role Of Synthesizers In Music By Marc Hairapetian & Rob Waters 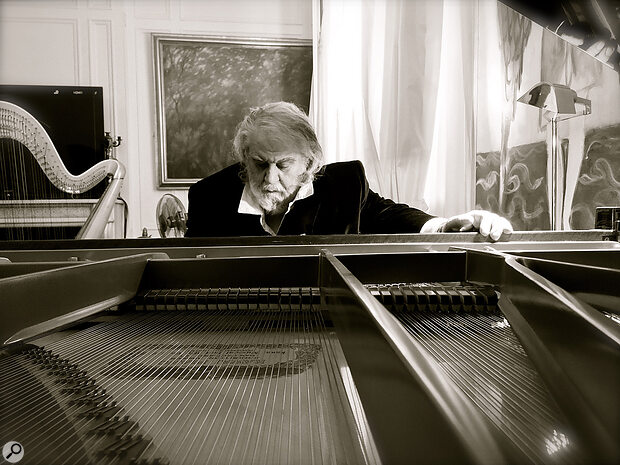 In a rare interview, legendary composer Vangelis shares his thoughts on the role of synthesizers in music — including his beloved Yamaha CS80.

"As I cannot release what I feel — as I have to pass through the customs of the music industry — there is a vast amount of music that I composed that has never had the chance to see the light of day," reveals Vangelis. "Not all my works have had the same exposure, due to the fact that the majority of them have not been tied to a movie, so they didn't have the chance to be heard widely.

"We all know that record companies never spend the right amount of effort and funds to promote these works to the public properly. They prefer the easy way: for another media like a movie to do the job for them. Therefore, our discussion is limited, because what is known to you and to the public represents a fraction of my works."

It's a tantalising prospect for fans of the Greek composer, who revolutionised the movie soundtrack with his scores to films such as Chariots Of Fire and Blade Runner. Equally tantalising for us was the chance to talk to Vangelis, who rarely speaks to the press, about his work. This brief conversation was conducted over email, in English.

For many people, the most distinctive thing about the music that Vangelis is known for is its prominent and skilful use of synthesizers. For the man himself, however, the distinction between electronic and acoustic instruments is an unhelpful and meaningless one.

"I have repeatedly said that I don't find any difference between what we call acoustic and the electronic instruments. I have the impression that there has been a kind of misconception about the difference between these two categories. For instruments that came before synthesizers to produce a sound they need bowing, like the violin and other strings, or they need plucking like the guitar or the harp, or they need blowing like the trumpets and trombones, and finally, hitting, like percussion and the piano. They need these to imitate and cover what is given by nature, and synthesizers need electricity and generators in order to create the sounds of nature.

"To me, the synthesizers are equally natural instruments. After all, what is more natural than electricity? This operation, and the arguments between these two sources of sound, becomes a ridiculous issue. For instance, I can not see the difference between a bicycle, where you have to pedal to take you from one place to another, and a motorcycle which does the same thing and uses other power like gasoline.

"Although I'm saying this, I can tell you that there is one difference. This difference is the playability, which is the ability given by the instrument to allow human expression. This is a very important factor for an instrument, and it is something that always existed for acoustic instruments, since the beginning of their existence. But we must not forget that the synthesizers are extremely young. In the few years of their existence, and because of the narrow-mindedness of the designers and the constructors of synthesizers, they never paid attention to this important factor of expression. This was sometimes due to technical difficulties and sometimes due to negligence.

"But this is getting better and better. In order to cover the totality of universal sounds you need both approaches. Soon there won't be any difference between acoustic, as we call them, instruments and electronic instruments — synthesizers — and it will be the end of the quarrel.

"The word 'syntheziser' comes from the Greek word synthesis, which means harmonious coexistence. This being the case, how would you feel if I call the symphony orchestra the first synthesizer? That proves the need of people to put all the sounds together simultaneously in order to create colours, a multitude of colours. If that is not a synthesizer, what is it?"

How would you feel if I call the symphony orchestra the first synthesizer?

If there is one instrument with which Vangelis will forever be associated, it's the CS80. Yamaha's flagship analogue synthesizer was hugely innovative when it appeared in the late '70s and remains the Holy Grail of many vintage synth enthusiasts, not least because its implementation of polyphonic aftertouch permitted expressive playing of a sort not easily achieved on other instruments before or since. "The CS80 was, and still is — until something new comes along — the instrument which allows you to play and to express yourself. It has the playability that I mentioned before.

"The CS80 wasn't very commercially successful, for three reasons. First, it is too heavy to be transported. (I don't consider this as a serious reason.) Second, it was for the time very expensive, compared to other synthesizers. And the third and most important reason is that this synthesizer, in order for it to be played correctly, you had to study seriously how to play it. Exactly like you had to do with any other acoustic instrument. Unfortunately, it was promoted to the wrong type of musicians, at a period when everybody was trying to find an easy and quick way to extract a sound and not to learn how to do that. So, it was inevitably not to be successful."

Most great composers undergo formal training from an early age. Not so Vangelis. The classic autodidact, he began composing at the age of four, but refused to take piano lessons or to learn to read and write notation. It is clear that he still regards music as something primal or instinctual that is easily choked by rules and conventions. "Since my early days, I always felt that music cannot be taught. Not so long ago, I read a quote from Claude Debussy, this divine composer, where he was saying exactly the same thing. I'm sure around the world there are many that think the same way — without of course dismissing all the others who spent years and years studying in music schools."

Vangelis' most recent album is called Nocturne: The Piano Album and, as the title suggests, features the composer playing works on the piano, albeit with considerable use of reverb and other effects. "This instrument took three centuries to reach the point where we call it 'the piano'; actually, the real name is the pianoforte. And although, as a polyphonic instrument, it helps the composer, it is one of the most difficult instruments for expression, as the playability factor of the piano is far less than other acoustic instruments such as the violin, flute and so on."

For Vangelis, the creative process of composition is a mystical and spiritual one. He depends on spontaneity and inspiration, and sees careful planning as the antithesis of this. "I prefer not to plan because, even though it seems practical, it kills the spontaneity. If every time I ask myself 'why this?' and 'why that?' I will never be free and spontaneous. Every time, the music leads me to use what she needs. Is there anything more mystic than the primary vibration, aka The Music?"

He judges the artistic success of his projects in similar broad-brush terms. Asked about the "icy" music he created for the 1983 Japanese movie Nankyoku Monogatari, which portrayed the lives of self-reliant sled dogs in the Antarctic, he replies: "You mentioned the word 'icy' — and this is a compliment for me, because this is the first element that I tried to achieve with this score. For you to mention that means that I succeeded."

Some of Vangelis's projects have drawn on his Greek heritage, most recently his score for the ballet The Thread. "The Thread is a dance production inspired by Greek traditional music and dances. It's a new way to approach something that has existed since the beginning of times. It's like an excavation to the past and at the same time an excavation to the future."

Ultimately, however, Vangelis sees music as a very basic force that transcends cultures and civilisations. "We are always trying to divide music in different styles, ethnicities and so on. To me, music is one. Therefore, there are no boundaries or any other major divisions. The relation between music and humans is like communicating vessels. And it works like Catch-22: I mean like a dilemma or difficult circumstance from which there is no escape because of mutually conflicting or dependent conditions. Deep down, music as the major force of the universe does that. I enjoy all kinds of expressions when they are sincere to the universe, and therefore to the people. When a melody is born, it doesn't need anything to prove itself."