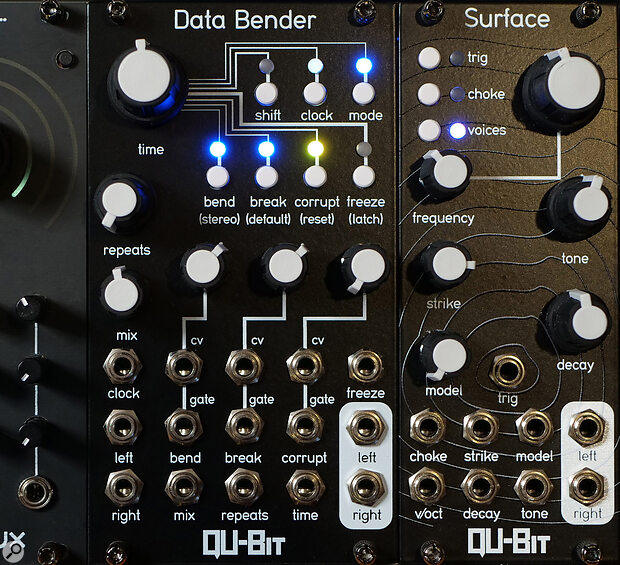 I don’t think I’ve ever been as pleasantly surprised by a module as much as I have with the Data Bender. Your first play is most likely going to end with frustration. There are buttons that light differently, knobs that don’t appear to do anything and noises that seem entirely random and unhelpful. Stick in some modulation and the experience goes from bad to pointless. However, once you step back and give Data Bender a little bit of your time and a more structured and thoughtful approach, it can become a wonderful and exciting module.

Armed with enough knowledge to be dangerous, it becomes an exploration of bouncing, blips, buffers and brokenness. The more interesting and animated modes revolve around ‘Bend’ which messes with time and ‘Break’, which messes with existence.

In Macro mode the Bend knobs bring in an analogue feel of tape and vinyl‑style effects, with reverses, tape stops and sudden but delightful pitch changes. The Break knob introduces skips and glitches like the smearing of dirty fingers and snot onto a CD.

Switching to Micro mode and Bend takes on the playback speed and pitch‑shifting either forward or in reverse, while Break throws in some silence, gating the audio into new rhythms, or it can select subsections of the buffer to play with.

Throughout the processing the big Time knob dictates the buffer’s size and the length of the cycle while the Repeats knob brings in time‑divided ratchets for the grabbing and repeating of notes. The Freeze button captures the current buffer into an endless repeat. Data Bender samples at 24‑bit and 96kHz and can capture over a minute of stereo audio.

The last knob is Corrupt, which is a satisfyingly nasty piece of work all on its own. It comes with three modes. ‘Destroy’ dials in some excellent saturation that explodes into a vast distortion as you dial it up. ‘Decimate’ bit‑crushes the audio out of existence and ‘Dropout’ introduces random audio dropouts.

The styling of the Data Bender is perfectly Qu‑Bit in the black and white and glowing LEDs. However, the placement of the knobs relative to the buttons is slightly confusing because they don’t appear to correlate. It’s that cheeky freeze button that throws it all out of whack, but maybe that discontinuity is part of the Data Bender’s charm.

...now I’m under the skin of the module, I can make any old Eurorack bleep sound funky and full of cascading data‑bent energy.

Once you get the hang of what each thing is doing, it’s entirely possible to tease out some beautiful forms and variations to your initial input. The source material also has a large impact on the results. Not until I pumped in the string model from the Qu‑Bit Surface did I appreciate the flow of what was happening. A sound with a pronounced decay makes the most of the reversing and highlights the breaks better than a tighter synth line. That said, now I’m under the skin of the module, I can make any old Eurorack bleep sound funky and full of cascading data‑bent energy.

I’m really enjoying the Data Bender. The timing and intensity seem to chase and pursue each other around the module, Time falling into Bend, pushed by Repeat and gently strangled by Break. And while it can be arresting and whimsical the Corrupt knob is always on hand to bring destruction. I expected it to sound like a dying fax machine and I wasn’t disappointed. Still, the subtlety and nuance and range of possibilities was a delightfully unexpected discovery.