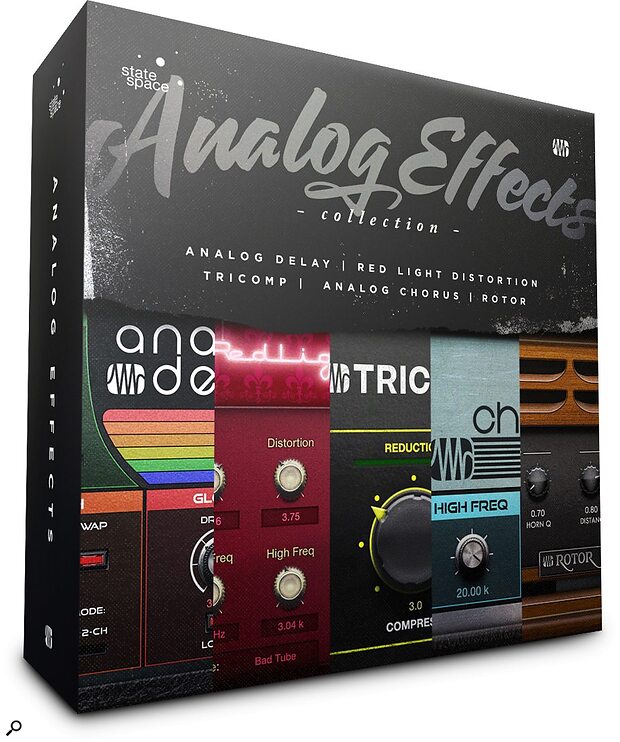 Some of Studio One’s hidden gems are now available to users of other DAWs.

PreSonus’ Analog Effects Collection comprises several plug‑ins that were formerly available only for users of the company’s Studio One Professional and Artist DAWs but can now be used in any Mac or Windows DAW that supports the VST3, AU or AAX formats. They’re all light on your CPU and on your wallet and the five effects (Analog Delay, Analog Chorus, Red Light Distortion, Rotor and Tricomp) can be bought individually if you prefer. They’re also included in PreSonus Sphere, an all‑you‑can‑eat subscription service offering a range of music‑making software, content libraries, collaboration tools, cloud storage and more.

Analog Delay sets out to emulate old‑school BBD (bucket brigade) and tape delay units, devices whose appeal lies in their murky, limited‑bandwidth repeats that tend to sit nicely behind the dry sound. Modulation is included to give a bit of tape‑style instability or delay‑meets‑chorus, and can be set to modulate the delay time upwards or downwards. There are four LFO shapes, sync options for the delay time and LFO and a stereo‑width control for when using the plug‑in in stereo. The Stereo width section has a ping‑pong mode with three settings: Off, with the delays remaining mono; Sum, whereby both channels are summed before feeding the delay; and 2‑CH, with each side of a stereo input treated separately. Width adjusts the output from mono to full ping‑pong mode. 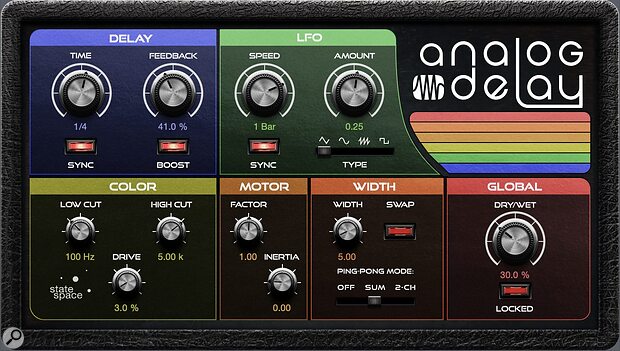 A tape‑style motor speed control runs from 0.5 to 2x speed, with a separate control to damp the rate of change or inertia. Colour is provided by Drive, Low Cut and High Cut controls and, of course, there’s a Dry/Wet mix control, and this has a handy lock button so you can choose whether or not to preserve this setting when selecting a different preset. A Boost button below the Feedback control makes it easier to build up dub‑style runaway effects, a style aided by that motor speed control function.

Having been brought up on tape and analogue delays when there were no other alternatives, I’m very familiar with their sound and this delay isn’t really dull and clunky enough to nail the true BBD sound (top‑cut EQ isn’t the same) and it’s not quite organic enough to carry off an authentic‑sounding tape impersonation. Importantly, though, it does produce musical, colourful delays that fall somewhere between the two and are very usable. If you already have a choice of analogue‑style delay plug‑ins, this one probably won’t offer you much that’s new but that doesn’t detract from the fact that it does a solid job at a bargain price.

The Analog Chorus plug‑in can generate up to three voices. The effect is created using the Delay control, which allows you to set up a short delay in the three to 15ms range. This delayed signal is then mixed with the dry signal to produce the familiar chorus sound. Depth sets how much modulated sound is added to the dry sound, so for a classic chorus sound this needs to be set to full.

In Chorus mode you can select one or two voices, while in Doubler mode, which also adds in a very short delay, you can select up to three voices. The modulation amount is controlled using the LFO Speed and Depth controls but you also have high and low EQ, plus variable Stereo Width. If the Spread button is active, multivoice effects are spread out between the two channels.

Again there’s nothing too far out of the ordinary here but you can recreate all the classic ’70s‑style chorus effects to a high standard and with a nice stereo spread. The two‑voice chorus is particularly sweet-sounding. 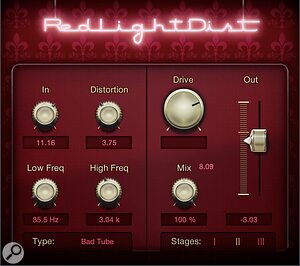 Red Light Distortion provides six distortion models, along with high‑ and low‑band EQ and a wet/dry Mix control. You can also select whether this is a one, two or three‑stage circuit — more stages generally means more gain and more filth. The modes are Soft Tube, Hard Tube, Hot Tube, Transistor, Fuzz or Op Amp and in the two tube modes, the Distortion control can be used to change the emulated tube distortion characteristics.

There’s no speaker emulation here, so for best results on DI’d guitar, you’ll need to feed this plug‑in through amp and cabinet models (or at the very least a cab model). If paired with an appropriate amp model, a bit of careful tweaking of the controls will take you from gentle blues break‑up to metal filth, with stops at all ports in‑between. If you are after a specific sound, then an emulation of a particular overdrive may be a better choice, but if you like to experiment with different overdrive flavours, Red Light Distortion does a good job.

Rotor is an emulation of a Leslie‑type rotary speaker cabinet, with separate drum and horn motors and controls for adjusting the balance between them. The user also gets two different flavours of variable tube overdrive simulation, as well as control over the virtual mic distance and the stereo spread. The high and low speeds for both the drum and rotor may be trimmed, and while the ramp up and down speed is fixed it is at what feels like a very natural and Leslie‑like rate. Rather than have the Brake setting in the middle of the Slow/Fast switch, a separate toggle switch is provided, and this brings the rotors to a standstill over a period of a second or so.

When I first tried this plug‑in with keyboard sounds, I found that the slow setting sounded a little lumpy unless I reduced the slow horn speed a little further, and while the distortion was effective enough in a musical sense, it didn’t quite reproduce the authentic ‘grind’ of the original. However, used on guitar with the distortion set to low or off, the rotary results were impressive, with the overall tonality better suited to guitar than many of the alternative rotary speaker sims I have, many of which seem to damp too much of the high end.

At slow speeds, you get a lovely, dreamy swirl, while the fast speed nails that Beatles rotary guitar sound or the mid section of the classic Cream song ‘Badge’ (a part reputedly played by George Harrison). There’s the option to adjust the resonance of the horn sound, and that brings some useful variation to the tonality adding to the characteristic rotary warble on the high speed setting. Given its bargain price, every guitar player should seriously consider getting this one!

Lastly comes Tricomp, a three‑band compressor with what PreSonus describe as automatic threshold and ratio settings, which are intended to make life easy for the operator.

It has plus or minus Amount controls for the low and high bands relative to the mids, three switchable attack times (or an Auto setting that also takes over the release time ) and a variable Release control. The high and low crossover points can be adjusted as required. A mix knob facilitates parallel processing, and there’s the option to add saturation, though more than the slightest hint of this sounds somewhat gritty to my ears. The compression law appears to be soft‑knee in character: the user can adjust the sharpness of said knee and also add make‑up gain if required. A large central knob regulates the overall amount of compression. Though much simpler than many other multiband compressors, this one manages to deliver a smooth sound that’s free from obvious vices, even when you dial in a lot of gain reduction.

The Mix option makes setting up parallel compression straightforward and I found it easy to get a good result with both guitars and vocals — probably the most common home studio tasks for a compressor. If setting up conventional multiband compressors fills you with dread, this one has much to commend it.

This may be a collection of largely bread‑and‑butter‑type plug‑ins but their low cost, low CPU overhead and solid sound quality make them extremely good value for money.

Analog Effects Collection £70.63. Individual plug‑ins £17.62 each. Prices include VAT. Alternatively a license for all plug‑ins is included with PreSonus Sphere subscription and Studio One Professional.

Analog Effects Collection $79.95. Individual plug‑ins $19.95 each. Alternatively a license for all plug‑ins is included with PreSonus Sphere subscription and Studio One Professional.