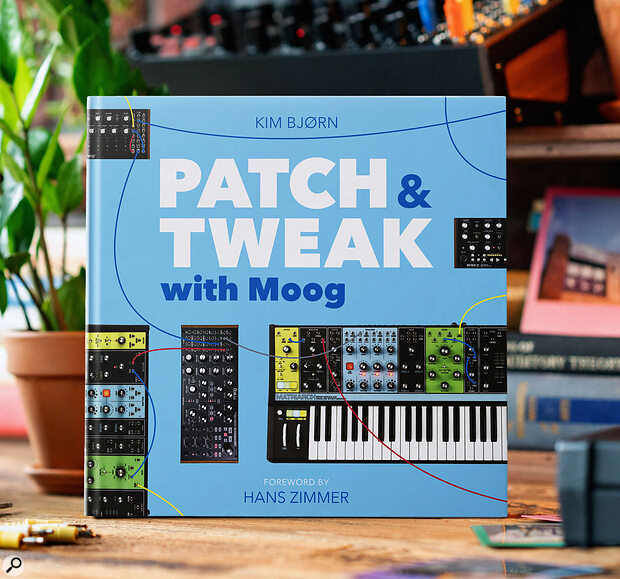 It’s a reflection of how big the modular‑synth world has grown, in the last decade or so, that a book like this can be commercially viable. But as many modular aficionados will already know, Patch & Tweak With Moog is just the latest in an expanding catalogue by Danish author, musician and designer Kim Bjørn. Given that it’s sold only via specialist outlets and at a premium price‑point, it looks as if the concept and format is positively flourishing.

Like the interface‑oriented Push Turn Move (reviewed in SOS October 2018: https://sosm.ag/push-turn-move), effects‑obsessed Pedal Crush (March 2020: https://sosm.ag/pedal-crush) and the original Patch & Tweak (reviewed very positively in SOS in 2019: https://sosm.ag/patch-and-tweak), this new 200-page volume intersperses chapters on gear, techniques and tips with over 30 artist and engineer/designer interviews. It maintains the very high production standards of its predecessors: it is hardback, nicely bound, crisply printed and vibrantly illustrated throughout. However, the scope is much tighter here, focusing entirely on Moog’s current sensible‑money semi‑modular synths the Mother‑32, DFAM, Subharmonicon, Grandmother and Matriarch. It’s worth noting, too, that while there’s no formal endorsement by Moog, there’s clearly been a close collaboration. As such, Bjørn’s tone throughout is enthusiastic and celebratory, never critical.

Practical‑leaning ‘try this at home’ technique chapters range from beginner‑friendly to advanced, in an entirely sensible ordering that follows the oscillator/ filter/ amplifier signal flow. They’re followed up with many more looking at modulation, sequencing and effects. Overall, they form a wide‑ranging, end‑to‑end synthesis primer, which could well be revelatory if you’re taking your first steps in modular. If you’re already beyond that, though, plenty of interesting ways of working and thinking are covered early on, not least the possibilities offered by oscillator sync, PWM, FM and AM, or filter feedback paths and audio‑rate modulation. Equally, there are specific tips and tricks too, like using sync to derive a sawtooth wave on the DFAM. It’s a treasure trove of technique and good practice: a great alternative (and fine complement) to the user manuals, and not remotely a rehash.

Extending possibilities still further, Bjørn repeatedly shows what can be achieved with multi‑synth combinations, especially braces of the keyboard‑less models. He often considers how the abilities of a single synth can be expanded with the sound‑producing, modulation or sequencing abilities of another, and illustrates it with clear patching diagrams that occasionally take up a whole double‑page spread (and utilise the same colour‑coded, symbol‑based visual language as the main Patch & Tweak). Just perfect for those two, three or four‑part synth stacks using the official Moog mounting hardware that are all too tempting to build up. The only downside is that if you don’t have the specific combination of models being described then many patches will be of little use; you’d need a master‑level grasp of synthesis to immediately see how to recreate similar functionality with gear you do own. 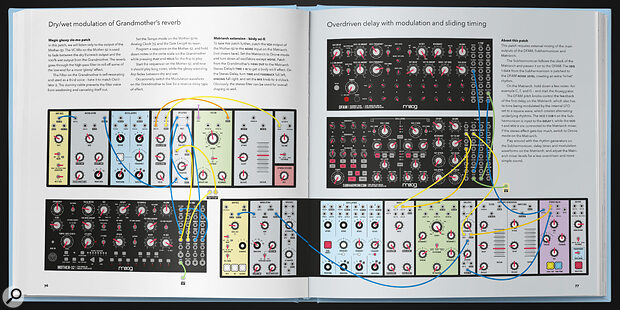 It’s not all restricted to Moog products, though, and in fact there’s plenty of discussion of more general ways of working. Several sections, and later on whole chapters, are dedicated to how you might extend the bounds and abilities of a Moog‑centred Eurorack setup, with recommendations of in‑vogue and up‑to‑date modules from the usual suspects (Mutable Instruments, Make Noise, Intellijel et al) amongst many from less well‑known manufacturers.

Valuable as all this is, the interviews and synth history features might well be the main attraction for some readers. They’re consistently colourful, often intriguing and inspiring, and all evocatively illustrated with photographs. The odd sniff of Moog sycophancy is easily understood in context, and actually there’s at least as much implied criticism of individual synth models (Trent Reznor talks about his Voyager “resting in the shed”), and frank recognition that not every synth excels in every role. Other luminaries include Suzanne Ciani, Hideki Matsutake (Tomita’s assistant in the ’70s), Daniel Miller (Mute Records) and Bob Moog’s long‑time collaborator Herb Deutsch.

An excellent foreword is by Hans Zimmer, no less. Add in Stranger Things composers Stein & Dixon, demo‑master Lisa Bella Donna, the musings of modern‑day Moog designers and engineers, plus a whole host of experimental and genre‑specific artists and it’s a real smorgasbord of Moogy goodness. Two superb chapters, the first charting Bob Moog’s roots, career and legacy, and the second detailing pretty much every Moog ever made across a nearly 70‑year timeline, form an irresistibly creamy icing on the cake.

Within a couple of hours I’d stuck 20 torn‑up scraps of paper in its pages, identifying techniques to come back to and try later.

Before I’d read it for this review, I was pretty sure that I didn’t need Patch & Tweak With Moog. I know how to use my Moogs, I thought to myself, and I know what I can do with them alongside a growing Eurorack case, a clutch of conventional synths and my DAW. But I couldn’t have been more wrong. Within a couple of hours I’d stuck 20 torn‑up scraps of paper in its pages, identifying techniques to come back to and try later. Then I got busy hitting the internet, listening to artists that were new to me. Equally, you could enjoy this book spread out on a coffee table, to be flipped through with a beer in hand and some good electronica on the turntable. Considerably bigger than the sum of its parts, and bristling with life and colour, this is a lovely book that ought to be in every Moog‑enthusiast’s library.