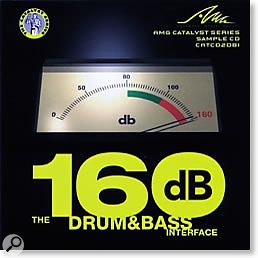 Although most Refill releases are repackaged versions of existing libraries, it would be cynical to think that this is only a way to squeeze more money from old products. The key to making a Refill worthwhile is by doing all the hard work (Recycling loops and mapping samples), which is exactly what AMG have done with the 160dB Drum and Bass Interface Refill. The drum and music loops are in the REX format and, in addition to being organised into folders, many of the other samples are mapped onto ready-made NN19 patches, with each sample getting about an octave of keyboard to play with. All of the individual drum hits are categorised into folders for use in the drum machine, with 10 ReDrum patches provided as starting points.

There are around 100 drum loops, which are divided into the Breakbeats and Live Drums categories. The base tempos are between 165-170 bpm and the drum loops also work well at other speeds. Most of the drum loops are simple and fairly tight, with many of the basic two-step variety, plus some nice weird and grungy loops, and just a few in the rolling old-school 'stylee'. The Live Drums are recorded tight and quite dry, with a ringy snare and understated cymbals, which gives you more choices in treating the sound. A few exceptions have been distinctively EQ'd or driven into harsh overload, but the subtlety is welcome and means it's possible to layer up the loops in many combinations without the sound becoming too messy.

The music loops consist of gated effects and short licks played on Rhodes, sax and upright bass, though only the Rhodes loops impressed me, and I think the NN19 upright patches are much more useful than the licks. Other highlights include some lengthy stereo atmosphere files, although, unfortunately, the music loops tended not to work so well when moved too far from the original tempo. The 40 Subtractor patches are disappointing, except for the nicely Aphexy 'Ferry of Styx', but, as an extra over the non-Refill release, it's more than compensated for by some really nice bass samples.

The other slight grumble is that all the loops are in the REX 1 format, which means they're mono — maybe there could be a REX 2 update featuring stereo loops? However, this is a usable sound library with well chosen loops and sounds that follow a theme, rather than a wide spectrum (think Photek's ModusOperandi instead of Squarepusher-style madness). Because of the intelligent use of the Refill format, you can use 160dB to produce good material incredibly quickly, and at 30 quid, it would be rude not to!