The unambiguously named Dual Looping Delay from 4ms consists of two time-sync’ed delays in a single 20HP module. Other than a common clock source and some for-convenience normalisation, the two delays (A & B) can be treated as separate entities. Unusually, each offers up to three minutes of delay/loop time, although this is reduced if you opt for 24-bit recording rather than the default 16-bit (24-bit still gives a healthy 88 seconds per channel). At 180mA (+12V), the power requirements are only a tad higher than the majority of modules I own and still less than half the draw of, say, a Roland Demora delay. 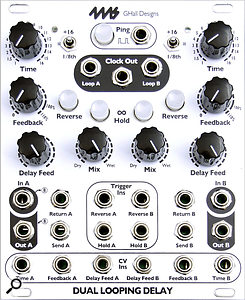 The impressive maximum time is the first clue that this is no ordinary delay; it doesn’t simulate analogue tape and change pitch when you alter the delay time, nor does it have any built-in echo degradation — although if that’s required, you’ll appreciate the sends/returns for patching in external filters or EQ. This module is all about pristine quality, easy synchronisation, evolving textures, long loops and mysterious activities such as ‘Windowing’ [That was eventually banned at my school — Ed]. Although sporting individual inputs and outputs for each channel, those of channel A are normalised to B so you can hear both in action using just a single set of connections. It’s your choice whether to use the sample-accurate internal clock and tap the tempo with the Ping button, or to pipe in an external clock.

The DLD arrived running v3 of the firmware and, after whetting my appetite with cascading stereo delays for several hours, I attempted to install v5 (it enables 24-bit recording, amongst other enhancements). Unfortunately, I was unable to awaken the DLD’s boot loader with my old Doepfer PSU2 power supply, but once I borrowed a beefier one, the process was relatively simple. You play an audio file into one of the inputs, it reboots and the new features appear.

Should you wish to try 24-bit mode, there are instructions on where and how to attach a jumper to the main board. I remain dubious about its value, though, given that 16-bit mode sounds so sweet and clean. Amongst the other features new in v5 are several ‘de-jitter’ modes to ensure the smoothest possible handling of external clock but, for me, the most important addition by far was ‘Quantised Change Mode’. When enabled, it tames interactions with Time, Reverse and Infinite Hold, so when you use those functions, they only kick in on the next clock pulse rather than immediately. While this is great for reining in some of the chaos CV input can bring, it can render manual panel operation rather sluggish when using long Ping times.

Both delays are synchronised to a common Ping value, and each offers three ranges for its Time knob, shown as ‘+16’, ‘=’ and ‘1/8th’. At the switch’s top setting, 16 is added to every value shown, while the lowest divides them into eighth notes. You aren’t limited to the divisions given either; by holding the ‘Infinite Delay’ button and turning Time, you slip into Unquantised Time Mode where the knob becomes fully variable.

Even with quantisation turned on, I didn’t always find it easy to dial in exactly the time division I wanted with a 17-position knob (a value of 1.5 is slotted in for dotted delay lovers). The smooth action works well in Unquantised Time Mode and further uses arise when driving the clock input from an audio-rate source, eg. a square wave from a VCO. Pick an eighth-note Time scale and the delay itself enters the audio range, becoming ripe for a plethora of Karplus-Strong resonant delay effects (the Time knob is now used for tuning). To further enhance this function, the Time CV input shifts its response to a 1V/octave curve, enabling you to play or sequence the resonant delays.

The other vital delay component, Feedback, goes as high as 110 percent, a level with built-in boost to simulate dub-style effects. At the 100 percent mark, you enter an infinite loop in which the delays never degrade or fade away. You can keep adding audio to it though, either from the regular input or the send input, although naturally the loop will keep getting louder (an internal soft-clipping function prevents it getting too nasty).

On the surface, the Infinite Hold button seems similar except that when it is engaged, Feedback no longer works and you can’t add more to the loop. The loop length is determined by the Time value and here’s where that Windowing function comes in. While the loop plays, holding the Infinite Hold button while turning Feedback shifts the start and end points of the loop. Further fun is had by reversing playback or tweaking the clock source to generate glitches and surprises galore. To better understand where the surprises come from, you need to appreciate that the DLD records constantly to its memory and that Windowing is likely to dig up older material from beyond the initial loop boundaries. If you apply CV to the time or quickly toggle reverse you’re in the realm of shifted beats, ambient mulch or even sudden silences if you haven’t been recording very long.

Surely the DLD’s most powerful feature is its long recording time, and to test this fully, you’ll need to set a very slow time base. Dividing each channel’s maximum of 174 seconds by the greatest Time value possible (32; ie. 16+16), you’ll realise that a tempo of 11 bpm is needed for the longest single recording! Fortunately, more practical tempi and a clock divider work well too, so while not a looper in the traditional sense, the DLD can produce some spectacular looping grooves and ambiences — and of independent length in each channel. To further exploit this, individual clock outputs are available for synchronisation to each loop.

It occurred to me how handy it would be if the delays didn’t have to use the same base clock. Then I noticed that very feature had been added in v5 too! ‘Ping Lock’ allows you fix either channel’s response to the current clock. All the controls continue to be active, but they’re based on the locked Ping time, rather than the actual Ping time, which you’re now free to tweak. It’s not as straightforward as giving each channel a separate clock input, but it’s a valuable trick when you need one channel for very short-delays and the other for regular duties — or even long, looping soundscapes.

Despite hours of indulgent fun I’ve barely scratched the surface, yet even so, summing up is easy. This is a superb twin delay module with enormous potential for complex, evolving textures, long loops and polyrhythmic pattern creation. It provides multiple flavours of dual-channel sync’ed delay and is considerably deeper than its friendly interface implies. Highly recommended.