It’s tempting to think an ensemble oscillator might be an ordinary VCO with a DDL ensemble effect strapped across its output. This is emphatically not the case! It is in fact 16 sine wave VCOs in one module, each voice of which will play different (related) programmed notes/harmonics in arrays that you can select, tweak and voltage control. 4MS have set out to explore the sonic boundary between a rich timbre and a musically harmonic chord, to some degree dissembling the notion of additive synthesis. In simple terms: holding a single note down on a tonewheel (or indeed pipe) organ and moving the drawbars (stops) in and out will essentially give you new waveforms. How much more interesting could that get when you can choose different pitch intervals between each drawbar (and have 16)? 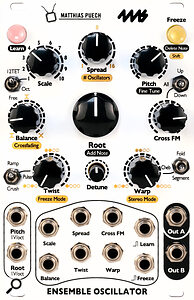 4ms Ensemble Oscillator: 16HP, +12V 114mA, ‑12V 45mA.The 4MS folk have a solid history of asking questions and finding unique solutions, and so it is here. They have teamed up with a Parisian computer genius, Mattias Puech, to help realise this module, and you will recognise his name and unique twists if you have a 4MS Tapographic Delay, or the ‘alternative’ operating systems for XAOC’s Batumi quad LFO or Mutable Instrument’s omnipresent Clouds.

The idea of fattening up a single VCO is not a new idea. Even way back in the early 1970s, Roland’s SH‑3A offered an 8’ chorus to mix in with the ordinary (simple) waveforms of its oscillator, and there aren’t many old synths I can think of which did not implement some sort of pulse‑width modulation, especially where there wasn’t a second VCO for added girth. With the JP‑8000 we saw Roland (again) launching the Super‑Saw waveform, and dance music has never really recovered from it. It is interesting to note that genuine Additive synthesis has not surfaced very often — the Kawai K5 anyone? Nor has Wavetable synthesis really taken root except for Waldorf and those old PPGs. Yes, you could do both, and maybe draw your own waveshapes on Fairlights and the Synclavier, but how many of us have one of those underfoot?

There have been a few attempts to provide multivoice VCOs in Eurorack format: Radikal Technologies RT 311 Swarm Oscillator a few years back, and only recently the Odessa from XAOC, for example (there are others). Generally I think you could say that, instead, people have been content to settle for waveshaping in its myriad forms for going beyond the usual sine/square/ramp/pulse choices. The fact that this 4MS foray is quite different from either, and relatively easy to grasp and operate, may change that.

The Ensemble Oscillator also has a massive trick up its sleeve: fresh out of the box, plug it in, start by twisting the big comfortable ‘Root’ knob and the most lovely swirly noises fall out. Sneaky trick it might be, but it instantly got my attention (and I guiltily used the effect 10 minutes later on a new recording). Given that there are 30 different selectable scales on board, this in itself amuses for hours, and once/if this wears thin, a fairly unscary procedure allows you to either dial in new scales using the panel or play them in from a keyboard. CV control of the Root knob — maybe a slow LFO — opens the sonic door to much pseudo Shepard Generator/Barber’s Pole tones, and you can also use CV to control the scale choice. Applying an envelope would allow you to mimic a filter where the harmonic complexity falls, or maybe rises, over time. A Pitch knob tunes the basic frequency, and a 1V/Oct CV allows you to play notes/tunes with your chosen harmonic grouping. As a drone box this module earns its keep, but once playing external melodic sequences it really widens the landscape.

So those are the basics. You can also choose how many of the 16 sine wave voices are active and adjust their balance to favour lower frequencies or the higher ones. A Freeze button and Trig socket lets you lock some voices (the fundamental, the lowest eight or only the odd ones), and there are three ways to spread these voices across the L&R output sockets. There are front‑panel switches to help choose, though some functions are only accessed by pushing and holding the Freeze button and turning certain knobs. Mostly there is CV control, though not everything can be modulated; there is a lovely Detune knob that lets you spread out the 16 voices, which makes a huge sonic contribution, but sadly, does not have CV control. This in combination with the cross‑modulation between the voices knob opens the door to mad ring mod sonics and bell‑like drones.

I like the idea that there is enough in this module to appease instant gratification and serious study.

I’m already sold, but there is more! In case you might find the Sine waves boring, there are two further mutators on board: Twist is a way to distort the waveform timebase into sawtooths, ramps, pulses and even bit‑crushing, and Warp applies three types of more traditional wave‑shaping. Twist and Warp have their own knobs and CV control sockets. All very clever, but my experience was that no matter how subtle I tried to be with either (or both) the overall output just got grittier. Don’t get me wrong, grit is good, but I wonder if these two really belong to another module, and I could have had the Detune knob and Voice number selection under CV instead?

Once I’d broken the spell of the lovely swirliness, I began to consider how I’d use it ‘just’ as a VCO, and looked closer at the premise of using the voices and scales for additive synthesis. Initially I got a lot of organ‑y tones, but digging deeper into the non‑quantised note series scales on offer finally yielded more interest. Using an external envelope to scan through the voices — or even some serendipitous S/‑ I locked into a way to transform a simple seven‑note melodic sequencer line into a thing of much more charm and interest. All this is still just using the Ensemble Oscillator direct outputs — no external Filters or VCAs yet! Very impressive.

Last but not least, a completely unexpected treat: holding the freeze button on power‑up allows you to tweak the colour of the LEDs. Usually I have to go in with a soldering iron to get purple instead of boring old red or yucky yellow.

Interpreting what an Ensemble Oscillator might offer, 4MS and Monsiour Puech offer us something both charming and engrossing. I wonder if the discovery of the swirly stuff side‑tracked our intrepid designers, and this might explain why the waveshaping stuff feels at odds. Don’t misunderstand, what this module can do without the swirl is very impressive too and the wavefolding can play a part in exploring a harsher soundset — maybe ready for filtering by another module.

I like the idea that there is enough in this module to appease instant gratification and serious study. The resulting new discoveries were in no way predictable when I first opened the box, but I’m glad I did. Another lovely deep and engrossing module from 4MS.