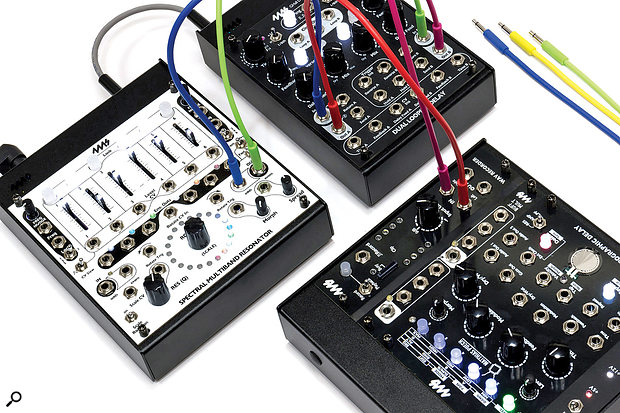 Described as 'compact Eurorack enclosures' by 4MS, Pods are a set of small boxes to put just a handfull of modules in. Nice and sturdy, in pressed and folded aluminium, they come with a smart satin‑black paint finish, pre-drilled for M3 screws and with a neat cut-out top left in the form of the 4MS logo — through which you can glimpse the three LEDs of the power distribution board inside. Nice! The 'standard' range come in four sizes: 20, 26, 32 and 60 HP, and in either powered or unpowered variants. These dimensions seem chosen to allow singular mounting of some of 4MS's wider modules — the SMR resonator, DLD delay and STS sampler spring to mind — but the limiting factor is probably the maximum depth of 34mm (1.34 inches) which is common to these four Pods.

The shortly to be released X series will include 40 and 48HP varieties and have an increased depth of 53mm (2.08 inch), which should house any DIY kits based on two piggy-backed PCBs, and some older modules with small PCBs mounted perpendicular to the fascias, so check carefully before you commit! Both depths are also constant front to back; there is no slope to these Pods, which seems a shame, and you have to be mindful that once the module is fitted, there still needs to be space for the power cables. Just getting the 4MS Quad Clock Distributer and its Expander into the 32HP Pod was a squeeze. You would also not want to accidentally squash wires against the PCB and cause a short. Some sort of non-conductive finish to the inside here might also be useful...

You might ask: why would you want a box that only takes one or two modules? Surely with Eurorack, size is everything! Certainly you can get some enormous cases to slake your thirst, but most enthusiasts seem to use a P9 (three rows of 184HP) as a base-point or the old G6 chassis (two rows of 184HP). With their integral power supplies (later ones including a 5V rail) these are usually enough to allow fairly complex patches for live or studio work. What happens, though, if you decide you still need one or two more modules? Adding a whole 184HP box to the rig will look odd if it has only got 10HP of stuff in it, and the temptation to fill it up might be too much. I see this as where the Pods come in. One approach might be to have an unpowered (say) 26 filled with multiples and the like (you can never have too many mults...); or maybe you'd like to have the delay module separate from the main patch, where you can tweak it easily without grappling through a forest of patch leads. I also think there are some modules which like to be a bit aloof, and don't like being in the thick of a patch — maybe they only output signals and don't need feeding, and I could see isolating these 'source' units out into Pods as a useful approach. 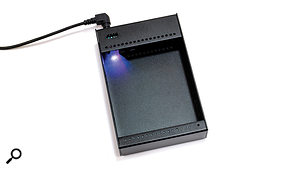 Each of the three smaller Pods has two power‑distribution (shrouded) headers inside supplying 700mA at 12V, while the 60HP Pod has four (1.4A at 12V). This sounds sufficient, but I quickly found I wanted more! I would say the 26 Pod needs three, the 32 at least four and the 60 a minimum of six! You can buy/make a cable with extra header sockets, but the rub is trying to squeeze it in, as space is quite tight! The X series promise a bit more scope here, and there is talk of further power options. This of course is only an issue if you want to mount a lot of narrow units, say four 8HP modules in a P32 rather than two 16HP modules. Another option would be to buy the Pods unpowered, and fit a 'Row Power' module, but this has both HP space and financial implications: the unpowered pods are cheaper, but the Row Power will push the price up. Clearly some careful thought is needed before you commit to a decision. The powered Pods have an attendant power-brick, which supplies the on-board distribution boards via a standard 5.5mm barrel jack, and multiple Pods can be daisy-chained (within sensible limits). However, these plugs aren't of the locking type, and there is no strain relief as such. I would be wary of this plug coming adrift amidst the usual rat's nest of cables inherent with table-top modular setups.

To sum up then, These Pods are neat, and I have already pulled out some of my favourite modules for special attention! I have reservations about the number of distribution sockets in the boxes, and if you are considering your own power solutions, then the unpowered Pods make sense. I think I would have liked a gentle slope to the fronts, and the 34mm depth is really a bit too tight (without squishing power cables).

I like the Pods a lot, but there are a lot of other skiff‑type cases out there to compare against, so choosing which is right for you could be hard. The Pods are nice and sturdy, with non-slip feet, but don't come with any sort of lid, and I would be wary of just chucking them (loaded with modules) into my gig bag. They are, however, very useful if you are doing diagnostics or calibration on modules on your workbench, though as mentioned earlier, most DIY kits are too deep to fit properly in the shallow Pods. So plenty to consider, but I think 4MS are the first to get to this point with small, sensible module cases. At least now I can luxuriate in not having to lug out the whole P9 case just for a clock divider.