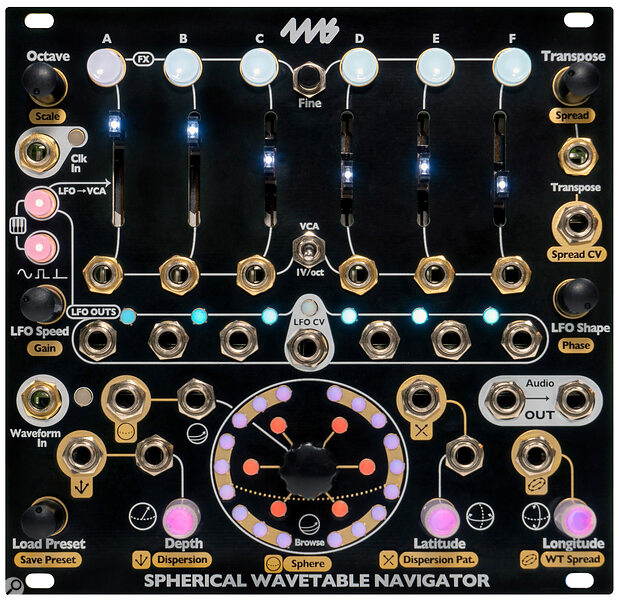 It seems the words most commonly heard in 4MS R&D meetings could be ‘...and it could do this as well’. The SWN is a fairly big 26HP six‑voice module capable of creating slowly morphing drones, polyphonic melodies, evolving sequences and a vast range of rich textures. I’ll add that it also looks rather lovely — shiny black fascia with illuminated (purple!) knobs to invite tweaking, and more sockets (26) than you could shake a patch cord at! Each of the six independent oscillators have their own wavetable generator, with their own pitch, amplitude and waveform controls. Six on‑board LFOs, which can also be simple Envelopes, can be used to further add dynamic motion to patches. Those panel sockets for external CV control offer wide access to functions — even some shifted functions only accessible by the push‑and‑turn of panel knobs. As I said, deep...

The Spherical part of the title comes from the way the various wavetables are mapped, and how you can navigate through them. On early wavetable synths (eg. PPG’s), the table was simply a list — you could choose start and end points, maybe direction of scan and maybe looping of sections/all of the list. On the SWN, 27 waveforms are mapped on to a sphere in 3 x 3 x 3 planes, all of which wrap around, and the Navigation allows you to move up and down the face of the sphere (Latitude), left and right (Longitude), or forwards and backwards into the Sphere (Depth). Because all these tables wrap around, you never fall off the end of a table, and instead of a linear list where you only have two choices of the next entry, here you have (I think) six. Mathematicians might bicker that this is a three‑torus, not a sphere, but there you go! The result is access to a fantastically flexible and constantly changing waveform, especially given that all the navigation options have CV control, and each transition is a smooth morph. Great stuff.

The module ships with 12 factory‑loaded spheres, but a ‘waveform in’ socket opens the door to loading in your own sounds and making custom Spheres. This can be great fun. Waveforms are loaded in max 2.5s chunks, and the best results come from complex waveforms, say speech or vocals. You can either let the SWN chop up your 2.5s waveform into 27 bits, or input 27 separate bits (but total time is still 2.5s). There are some on‑board effects you can apply to these inputs — bit crushing, wavefolding, LPF, gain normalisation, seam‑smoothing and metaliser — to further add spice. There is also the facility to save both wavetables (108) and entire module setups (again 108) in an on‑board memory (phew!), but I have to say the selection method is rather arcane in its use of the wheel of coloured LEDs surrounding the Browse knob.

Control of the individual voices is achieved rather cleverly; at the top of the module is a row of six LED illuminated push buttons, and various colours indicate different functions. The simplest of which is voice on or off. If you hold a button down and tweak a knob elsewhere on the panel, that change will only apply to that voice. By extension, holding down multiple buttons at once changes only those voices, and canny finger work allows easy offsets to be set up. Conversely, if no buttons are held down the knob twiddling will be global, which is really rather neat.

There is a small ‘fine’ button nestling in the middle of the buttons which, when pressed, applies a scaler to whichever knob is being moved. Again, simple and neat. Without any external pitch/trig CVs, the module has a collection of preset scales and intervals for the six voices accessed through the Octave and Transpose knobs at the top of the panel. Pushing and turning these changes scales of quantisation, and the spread of preset chords. An external 1V/Oct CV at the Transpose CV socket allows external overall pitch control of the unit. On top of this, each voice can be individually controlled externally, allowing the unit to be played polyphonically — time to dig out that six channel sequencer...

The last piece of the jigsaw are the six LFOs that live across the middle of the panel. Unless you want to externally sync the LFOs using the clock in socket, LFO speed and waveform knobs do the controlling. There is an LED showing each LFO’s state, which helps you see what they are doing. Holding down a channel button and turning LFO speed will cause a divide or multiply to that LFO. Holding down the Fine button as well will give you access to non‑integer divides too. A further global CV can be added as an offset via the LFO CV socket for further chaos! The LFOs by default control the output level of the corresponding voice, via discrete VCAs, but given that the VCAs can be overridden by external CVs, this means the LFO outs are up for grabs, and easy prey for the seven CV inputs in the Sphere Navigator section. Wonderful!

You can use it as a drone box, use it as a six‑voice wavetable synth, or create a bewildering landscape of strange (super‑imposable) wavetables.

This really is just the bare bones of what the SWN is/does. You can use it as a drone box, use it as a six‑voice wavetable synth, or create a bewildering landscape of strange (super‑imposable) wavetables. As I said before, deep. I like the fact that the module has enough scope to offer the curious a very wide playing field. Often you come up with a wish for yet another function, but here it seemed everything I thought of was already there. Maybe because I wasn’t approaching things particularly scientifically, I missed some functions that purist wavetable wranglers might desire/require, but when the module makes such interesting noises in the hands of this old analogue purist, I’m not sure I care! The sheer complexity of the six LFOs would be enough for a wholly satisfactory standalone module, so the fact that it is only a small (but vital) part of the SWN gives you some idea of the level of 4MS’s commitment to sonic exploration.

If there is a downside, it is simply how to retain clarity of operation when so much functionality is on offer. I don’t think I have another module with quite so many dual‑function sockets and push‑and‑turn encoders — there are no traditional knobs on this module — and buttons with multicoloured LEDs. I’m going to suggest that we are right on the edge of whether an OLED screen would ease navigation. But then again, I have an irrational aversion to anything with a screen, assuming the module is too complex for its own good! I have to say it took me a long while to get to grips with this module, though I do now love what it does. I can see the 4MS evolution from the Spectral Multiband Resonator through the SWN to the new Ensemble Oscillator, and enjoy each for their individual abilities, but I should add that my Damascus moment with the SWN was when I switched off all but one voice, and began to dig into what I could do just with that. Once you have the basics under your belt, then there is nothing to stop you. I think maybe there are plenty of SWNs out there which have foxed their owners, but I would suggest that there is a great deal to enjoy here, if you can find your way in.