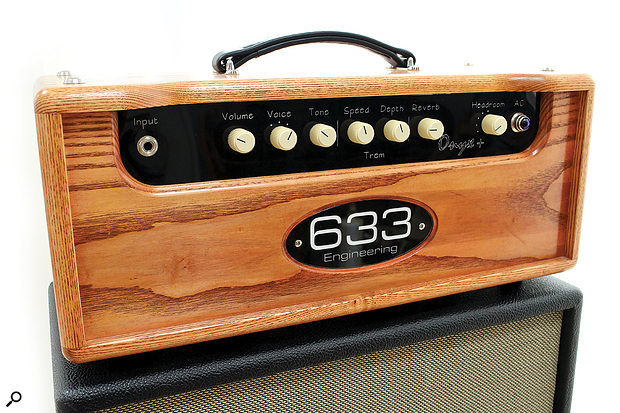 Configurable to your tastes, this handmade guitar amp caters both to studio and stage use.

Unless you track what’s going on in the boutique guitar amplifier market, you probably won’t yet have come across 633 Engineering. Based in the small Northamptonshire village of Yelvertoft this British company are the brainchild of founder Cliff Brown, a guitarist and electronics engineer who began playing guitar at the age of 12 and then went on, at the age of 13, to design and build a 50W solid–state guitar amplifier. This precociousness led to a career in audio electronics that started at a then–fledgling company called Soundcraft. Following spells in recording studio maintenance and as a freelance engineer and musician, Cliff returned to Soundcraft in 1994, rising to the position of Chief Design Engineer in the Soundcraft Studer Group. He ended his time there deeply involved in the design of digital mixing consoles.

A parallel life as a gigging guitarist who modified valve amps and road–tested the results week in, week out, gave Cliff real–world experience that must have come in handy when he joined another fledgling startup, Blackstar Amplification, as their Chief Design Engineer in 2008. Before leaving to form 633 Engineering in 2013, Cliff had not only worked on the HT5, Series One, HT Venue and HT1 amps, but had also designed a range of analogue and digital hardware with embedded software.

The 633 Engineering web site strap line is, “The finest guitar amplification — hand-built in the UK by a perfectionist,” and when you remove its sturdy cushioned cover and first set eyes on it, the Onyx+, the latest in the 633 range, certainly looks the part. The front–panel controls, bookended by a single jack input socket and a blue–lensed power–indicator lamp, are relatively sparse and deceptively simple: Volume, Voice (three positions), Tone, Trem (Speed and Depth), Reverb and Headroom (five positions). The back panel isn’t overpopulated either: power switch, socket, and mains and HT fuses at one end are joined by two speaker jacks and an impedance switch (4, 8 and 16 Ω) in the centre. A balanced-XLR simulated–cabinet output (ideal as a monitor and/or FOH feed), a four–position reverb–mode switch and the XLR socket for the supplied two–button footswitch, which brings in the tremolo and the pragmatically named ‘More’ level boost, round things off.

The Onyx+’s valve line-up of three 12AX7 (ECC83) tubes in the preamp and two 6L6s as the power stage, together with the presence of tremolo and reverb, might have given this amp a bit of a Californian vibe, but the way in which designer Cliff Brown utilises and controls these valves hasn’t figured in any of Leo Fender’s amps that I’ve seen. 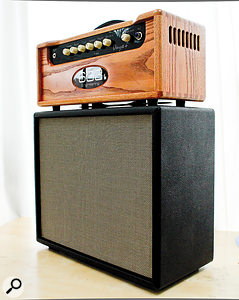 One triode of the first 12AX7 operates as the initial gain stage and its output runs to the Volume control. Its other triode is the phase–shift oscillator in the bias–modulating tremolo circuit, which acts on the anode voltage of the first triode to vary its output level.

The Volume control feeds the triode in the next 12AX7 that makes up the second gain stage. The other triode delivers the voicing that gives the Onyx+ its three basic sounds: a bass–light setting that helps to keep your sound tight and mud–free at high distortion settings, a more mid–focused sound that helps fatten up single–coil pickups and, finally, a bigger, deeper sound that carries more bass and is designed to stay clean until the amp is pushed into power–stage distortion. In addition to changing the circuit topology around this second triode, the Voice switch also alters components and values in the Tone stack that follows it.

This last 12AX7 is the amp’s ‘long–tailed pair’ phase–inverter and drives the two 6L6 output valves without negative feedback. The input to the solid–state reverb circuit is taken just before this 12AX7 and the return is fed into the phase-inverter at the point where you’d normally expect to see a negative feedback signal turning up.

The 6L6’s output level is controlled not by a master volume knob but by the Headroom control. This acts by changing these valves’ bias types, plate voltages and surrounding component numbers and values as it reduces the amplifier’s maximum output (measured at 10 percent THD) from 45 to 30, 20, 12 and, ultimately, 6 Watts. Balancing the output level from the second gain stage (determined by your guitar’s volume control, the amp’s Voice and Volume controls and the More boost) against the chosen headroom gives you the ability to find sounds anywhere from clean to hooligan distortion at each of the five wattage settings.

All non–front–panel switching (More on/off, Trem on/off and Reverb Mode selection) is handled by relays which are powered from a separate transformer. Speaking of transformers, the output transformer is a completely stock Hammond unit. A solid–state rectifier keeps the amplifier’s internal voltages rock solid, keeping things punchy even at lower headroom settings.

Hit the power switch and a large ‘633’ logo, mounted in the head’s cabinet, lights up, in addition to the blue indicator lamp: you’re not going to mistake this amp for anything else on stage! I say ‘on stage’ advisedly, as this isn’t a quiet amplifier. 45W of valve amplifier pushed into power–stage distortion gets well beyond neighbour–friendly sound levels and, subjectively, the Onyx+ doesn’t seem all that much quieter at its 6W setting. A noticeable absence of hiss (until you start pushing the amp to its limits), though, makes the Onyx+ an ideal studio companion for a good loadbox/DI.

Having chosen your starting Voice and Headroom settings, you can proceed to create your sound. I’m very much into touch–sensitive playing, using attack and my guitar’s volume controls to make the transition from clean, through crunch and on to distortion. The Onyx+ really rewards this approach, and kicking the More footswitch brings in a 6dB boost that opens the amp up perfectly for soloing. For my taste, this level of boost was a little too much. Thankfully, the boost level is adjustable, but only internally — I’d personally prefer to have access to that on the amp’s back panel, and this is perhaps something that 633 could look at. 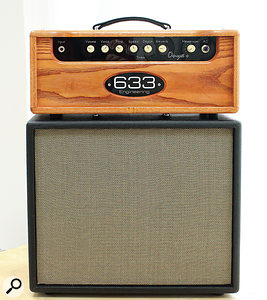 Wind the volume up in whatever voicing and headroom you’ve chosen and you’ll find saturated, harmonically rich, full–on distortion waiting for you. I absolutely loved playing with the distortion I got at the 6W setting. At a hard–driven 45W, the sound was absolutely mighty and reminded me (and my neighbours) of an early JTM45 of blessed memory.

Special mention must go to Cliff Brown’s reverb implementation. The rear–panel selector switch has four settings: an overall long reverb time, an overall short reverb time, a combination of a short reverb with the More boost in and a long reverb without it, and vice versa. Both the time and relative levels of the short and long reverbs can be set at the factory to suit the owner’s taste, although, again, it would be nice to be able to adjust these from the outside.

For me, 633 Engineering’s Onyx+ is one of the finest amplifiers that I’ve had the pleasure of playing through. Although it hadn’t been set up specifically for me, it came as close as I’ve yet found to being my perfect live amp. A bit of adjustment here and there and it would get closer still. Like all 633 amplifiers, the Onyx+ is a build–to–order item whose chunky price pitches it just above Marshall and into market territory occupied by the likes of Bogner, Boogie, Friedman, Matchless, Suhr and Two–Rock. However, Cliff Brown approaches each build individually and, by modifying the voicing in both preamp and power amp, can match the amplifier to each customer’s needs, tastes and playing style — and that, for me, is a killer feature.

I don’t do the gigs these days that would justify buying an Onyx+, but if I did my order would be in by now. If you have the budget and the need for a great valve guitar amp that will be voiced to meet your own individual requirements, then you really do need to audition 633 Engineering’s Onyx+.

There are several other UK–based custom boutique amplifier builders worthy of your consideration. However, many of these appear to be ‘inspired by’ the classic valve amps from a bygone era and only a few have stepped away from this clone culture to offer something unique.

Designed and hand-built in the UK, the 633 Engineering Onyx+ valve guitar amplifier is a very fine boutique product that can be voiced to match individual tastes and playing styles. Highly recommended.

Tolex finish £2549, oak finish (as reviewed) £2749. VAT not applicable. [the company isn’t big enough to be VAT registered, so pays VAT on its components, and thus no VAT is charged to the customer]