Acon Digital's reverb plug-in looks simple, but is it effective?

In recent years we've seen several developers attempt to marry the realism of convolution with the flexibility of more traditional digital reverbs. In January's issue, for example, we looked at HOFA's IQ Reverb, a convolution reverb with editing options that you'd normally expect to find only in a plug-in that generates its output algorithmically, and similar approaches are on offer in Liquidsonics' Reverberate and recent versions of Audio Ease's Altiverb.

Acon Digital's Verberate tackles the same challenge, but from the opposite direction. In other words, it's an algorithmic reverb that is said to use "novel methods” to match the realism of convolution. Available in 32- and 64-bit versions for Windows and Mac OS, including a 64-bit AAX version for Pro Tools 11, it's authorised using a serial number.

The Verberate interface is visually very basic, but perfectly functional. Like most algorithmic reverbs, Verberate generates early reflections separately from the main reverb 'tail', and both of these components have their own level fader. A button locks the relative levels of reverb and dry signal, so you can recall presets without having to make the necessary adjustment every time. While I applaud Acon Digital for keeping the user interface simple, though, it's a shame there is no metering. Separate stereo and surround-capable versions are offered, but oddly, the AAX plug-in is not available as mono-to-stereo.

The innovations that have gone into the design of the plug-in are not reflected in the available editing parameters; there are few of these, and all will be familiar if you've ever used an algorithmic reverb before. A choice of eight 'early reflections mode' algorithms 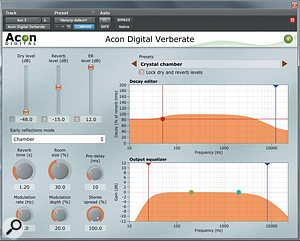 covers rooms, plates and halls, a chamber, and more unusually, one designed to replicate outdoor ambiences. The reverb tail offers the usual time and size parameters, plus modulation rate and depth, and stereo spread. A simple but deceptively powerful Decay Editor lets you adjust the way reverb time varies with frequency, and the output of the plug-in passes through an EQ with two parametric bands and high and low filters.

Don't be deceived by the simple control set and freeware-style graphics, though: this is both a versatile and a very nice-sounding reverb. Acon Digital's claim to have matched the realism of convolution is especially plausible in the realm of short ambiences. I'll often use a 'barely there' reverb with no discernible tail to help sounds blend together in a mix, and usually, this means loading an impulse response sampled from a treated studio live room or similar. Many algorithmic 'verbs struggle to sound natural in this role, but Verberate passes with flying colours, adding a fullness and depth to the sound without obvious coloration.

I was also taken with its chambers, which are just as dense and characterful as they should be. Likewise, rooms and other medium-sized spaces are more than competently handled. The outdoor algorithm offers some interesting possibilities, and although I didn't like any of the plate presets, some tweaking yielded a pretty convincing vintage vocal effect. At the more epic end of the spectrum, the halls are perfectly usable, though they don't have the richness you find in something like Exponential Audio's Phoenixverb. All in all, this is a fine reverb for the money, and one which I'm sure will feature in plenty of my own mixes in years to come.

Verberate is a powerful, good-sounding reverb that's affordable and simple to use. What's not to like?

Mastering Essentials Part 3 - How loud should I master?
1 day 6 hours ago.