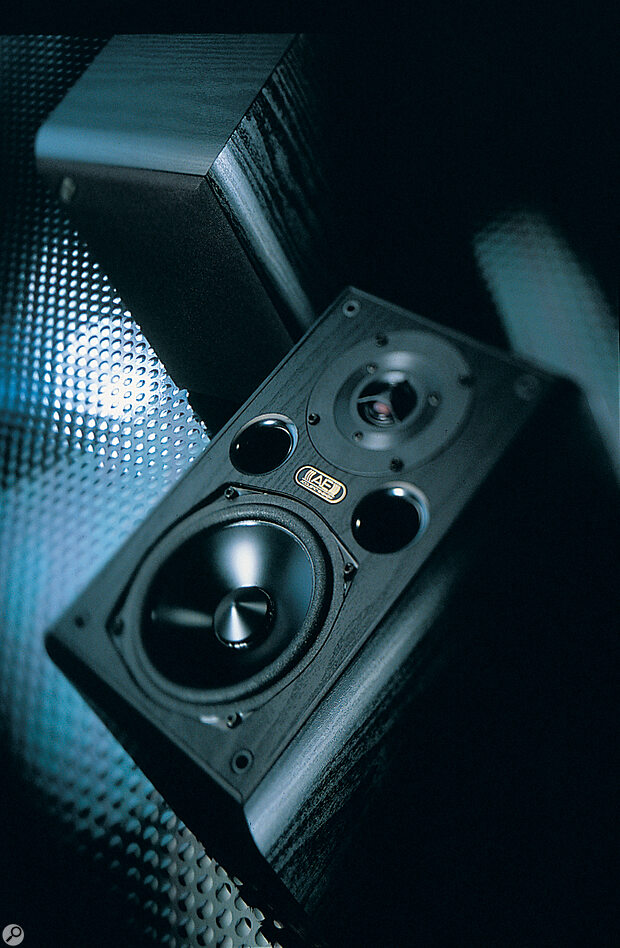 The AE200s use metal‑coned drivers throughout, but does this technology offer any advantages over more conventional designs? Paul White investigates.

Loudspeaker manufacturers are all bounded by the same physical laws, yet there are as many opinions on the best way to build a loudspeaker system as there are designers. Many of the differences centre around cone materials, with some designers being prepared to sacrifice acoustic efficiency by using heavier, highly damped materials while others prefer lighter paper or polymer cones. There's also the option of using metal cones, and there are numerous metal‑diaphragm dome tweeters on the market, but metal‑coned bass/mid units are less common.

Intriguingly, in designing this 2‑way nearfield monitor, AE have opted for a metal‑coned 130mm chassis bass/mid driver as well as a domed, ferrofluid‑damped 25mm alloy tweeter. One reason for this choice is that anodised aluminium is light, rigid and helps conduct heat away from the voice coil, which, in this case, is thermally bonded to it. A five‑element crossover operates at 3kHz and two sets of terminals are provided on the back panel for bi‑wiring. The maximum power handling is quoted at 125 Watts.

The AE200's black ash‑finish MDF cabinet forms a fairly conventional ported enclosure measuring 185 x 3000 x 250mm, and the walls are 18mm thick and internally braced, with the front edges rounded to help reduce cabinet‑edge diffraction. Both drivers are centrally mounted and recessed into the front baffle along with two flared plastic vents for the porting system.

Despite their small size, the AE200s deliver a very reasonable amount of depth and power. They're also quite sensitive, at 89dB for 1W at 1m, and the '3dB down' points are at 60Hz and 20kHz, although the usable response extends from 40Hz to 25kHz. Both drivers are magnetically shielded to permit use close to a computer monitor, and the nominal load impedance is 8Ω.

A detailed listening test immediately revealed the futility of relying purely on measured parameters when evaluating loudspeakers, because although these speakers are designed to produce a nominally flat response, they have an obvious brightness about them. Some of this may be due to the choice of an aluminium bass/mid diaphragm, but I suspect that most of it is down to the choice of tweeter, and to be fair, you have to make compromises when you're trying to design a budget‑priced loudspeaker. I've never yet heard a metal‑domed tweeter that doesn't introduce some audible coloration, and in this case, there's a trace of splashiness in the high end. It isn't excessively aggressive, and it does help to make these speakers extremely revealing of transient detail, albeit at the expense of over‑emphasising any sibilance that might be present in the recording. However, don't assume that these are in any way lightweight‑sounding speakers, because the bass end actually turns out to be quite solid and extends well below the usual 80Hz kick drum peak. Drums and other types of percussion sound solid, lively and confident, as do basses. Voices exhibit a noticeably forward character, while plucked stringed instruments come over with quite a sharp attack. There's more than enough volume for comfortable nearfield listening and the stereo imaging is generally good with a usefully wide sweet spot.

It's simply not possible to build a loudspeaker at this price that is perfect in all areas, but the AE200s have a lot of positive attributes alongside their tendency to be over‑bright. Indeed, those used to mixing on traditionally bright monitors, such as NS10s or some JBLs, will probably find the AE200s suit them without too much of an adjustment period. I like the lively, punchy aspect of these speakers, and have no argument with their SPL capability, but I have to admit that listening at high levels for any period of time can be fatiguing. I tend to prefer very neutral monitors, but I know that a lot of studio engineers are used to monitors with a degree of forward voicing, so it may be that AE are deliberately targeting this sector of the market. Either way, you should always try to listen to monitors before you buy them, as different people seem to perceive different audio 'truths'. If the voicing suits your way of working, these are good‑value monitors that are able to perform well in a small studio environment, even close to computer and video monitors.

A well‑engineered and very affordable small monitor producing plenty of level with a decent bass extension. Will suit those who like monitors with an upfront sound.