Acoustic Energy look to strengthen their foothold in the studio monitoring market with this impressive nearfield system. 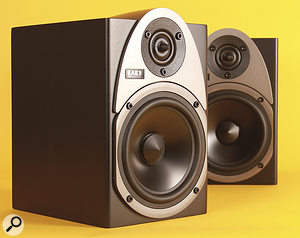 Acoustic Energy Pro (AE Pro) are British loudspeaker manufacturers located in the Cotswolds, the so‑called 'heart of England', and not far from two other well-known monitor loudspeaker builders, ATC and AVI. The company first came to the attention of both hi‑fi and pro‑users when they launched the compact AE1 two‑way passive speaker in 1988. However their efforts were focused almost entirely on the hi‑fi market, and seven years later a 'strategic alliance' with a large manufacturing company in the Far East ensured their place in that market. More recently, though, Acoustic Energy have turned their attention back to the pro and project studio markets, relaunching the AE1 'Classic' and introducing the excellent AE22 reference monitors (in both active and passive versions) in 2007. These were reviewed in SOS May 2008.

Building on the well‑deserved success of the AE22, the company have now launched a new powered subwoofer called the Pro Sub, designed to complement both the AE1 Classic and the AE22. Moreover, they've decided to offer a diminutive active monitor to work with it too, called the Pro Sat. This new monitor can be used on its own as a simple compact stereo system, or with the Pro Sub to form a 2.1 full-range stereo system, or to provide larger 5.1 or 7.1 surround systems. A three-year warranty is provided in the UK.

The AE Pro Sat, like the AE22, uses a sealed cabinet for accurate time-domain response, and its dimensions of 150 x 220 x 180 mm (WxHxD) enclose an internal volume of just six litres. The built‑in electronics include a 50W bass‑mid amplifier powering a 130mm aluminium-cone woofer, and a 25W amp for the 25mm Vifa 'dual ring radiator' with its distinctive waveguide centre-plug 'nose'. The two drivers are mounted vertically one above the other, rather than continuing the offset design theme of the AE22, although the tweeter is mounted very high on the baffle, with a flared bulge in the top panel, which does continue the AE22 styling theme to some extent.

The Pro Sat is voiced to provide the most accurate reproduction when positioned in the nearfield between 1.5 and 2.5 metres from the listening position, and near a substantial boundary — such as on a console meter-bridge, computer desktop or rear wall. In other words, it relies on some boundary effect to provide a reasonable bass extension, and the quoted frequency response when placed in that kind of location is within 3dB from 100Hz to 40kHz — which is pretty respectable for a speaker of this size and design. As this is a sealed‑cabinet design, the bass roll‑off is a gentle 6dB per octave, so although the 100Hz figure might sound quite high, there is audible bass extending well below that.

Four rear-panel, three‑way DIP switches provide user adjustment of various aspects of the speaker, starting with the input sensitivity, which can be switched between 0, ‑3 or ‑6dB settings, relative to a nominal 300mV input signal. That translates to nominal input levels of ‑8, ‑5 or ‑2dBu. Low-frequency extension is adjustable between 90Hz and 75Hz, the latter intended for use without a partnering sub. Selecting the 75Hz option extends the bass response a little, but at the expense of lower power handling. The third switch alters the high-frequency equalisation from flat, up or down 2dB above 2kHz. This is to help compensate for the listening room's HF damping. The fourth DIP switch is currently unused.

The fixed‑voltage mains-power inlet is via a standard IEC socket with integral fuse holder, and audio can be connected via either a 'combi' XLR/jack socket (balanced XLR, unbalanced quarter‑inch jack) or an unbalanced phono socket. 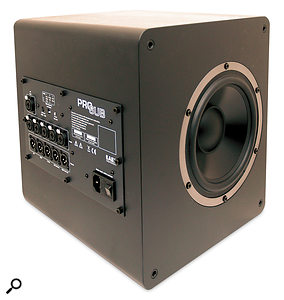 The Pro Sub subwoofer, which can be used with AE's other satellite speakers.

The accompanying Pro Sub subwoofer is another sealed-cabinet design, measuring a surprisingly compact 350 x 350 x 330 mm (WxHxD) and weighing 14kg. The frequency response is given as ranging from 25Hz (‑6dB) up to either 70 or 100Hz (user selectable) with a second‑order (12dB per octave) roll‑off above that, to provide a relatively gentle crossover with the satellite speakers. This upper crossover frequency is set with a rear-panel DIP switch, the 100Hz setting being optimal for the small Pro Sat speakers, while the 70Hz setting is for use with the larger AE22 and AE1 Classic monitors. A second DIP switch provides a polarity inversion option to help in phase‑aligning the subwoofer's output with the satellite speakers, if necessary.

A built-in 200W amplifier powers two long‑throw, 250mm, aluminium-coned drivers, one mounted on each side of the cabinet behind removable cloth grilles. They operate in phase with each other, so that vibration is minimised through opposing force cancellation — so you shouldn't find the sub wandering around the floor if you crank the bass! This configuration is also claimed to help minimise room-mode interaction problems, making placement less critical than with some subwoofer designs.

Rear-panel connections include a fixed‑voltage IEC mains inlet with integrated fuse holder, while audio connections are via six 'combi' XLR/jack inputs (balanced XLR, unbalanced quarter‑inch jack) and five XLR outputs. Inputs are provided for all six channels (L, C, R, Ls, Rs, LFE), so that the internal circuitry can apply 'bass management', stripping off the bass from the five main channels (below 70 or 100Hz, as determined by the DIP switch) and mixing it with the LFE (low‑frequency effects) input signal, before passing the whole lot to the subwoofer's amplifier. The five balanced XLR outputs provide high‑pass filtered outputs (at 70 or 100Hz again) to feed the satellite speakers. Stripping off the low end in this way allows the satellite speakers to provide greater volume as they are relieved from having to reproduce the headroom‑sapping low bass. A recessed rotary control allows the level of the subwoofer output to be adjusted.

If full-range monitors are used rather than one of the AE designs, or bass management is handled elsewhere, the Pro Sub can be fed with only an LFE signal. Alternatively, a pair of Pro Subs can be used to build a 2.2 stereo system, in which each sub is fed with a single audio channel (left or right) and connected to its own satellite Pro Sat or AE22/AE1 Classic monitor — effectively creating a full-range, three‑way, composite speaker. However, the review system was supplied as a simple 2.1 setup with a single Pro Sub and a pair of Pro Sat speakers. 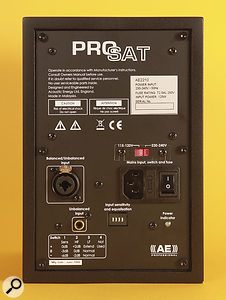 The rear panel of the Pro Sat nearfields provides both balanced and unbalanced analogue inputs.

I started my auditioning with the Pro Sats on their own, switched to the extended bass position and placed them either side of my office desk on Auralex MoPads to tilt them up a little, with their backs a couple of inches away from the rear wall. Initially I found they were a little fierce‑sounding, but flipping the rear HF equalisation switch to the ‑2dB position easily tamed them, and the results were remarkably good for such a small box. Stereo imaging is finely etched and rock solid — one of the benefits of such a narrow front baffle — and although there isn't a huge amount of weight at the bottom end, what is provided is clean, tight and tuneful. The top end is quite airy and detailed, while the mid-range is tonally accurate and reasonably transparent. For a compact active speaker at this price level, I'd say the performance is very good.

One of the hardest and most revealing tests for any loudspeaker is a well-recorded spoken-voice track, such as the ones provided on Canford Audio's Quick Check test CD (track 10 and 11). We all know intuitively what human voices sound like in real life, so any non‑human colourations from the loudspeakers stand out very obviously. The Pro Sats passed this demanding test pretty well, although on their own they sounded a little bass shy. Resetting the bass response to normal and hooking them up via the Pro Sub easily rectified that tonal imbalance, although initially it was obvious that the subwoofer level was set a little too high. The spoken voice track again provided an ideal source for aligning the Pro Sub output level by ear. It's not the most technically accurate way, obviously, but the level range over which the voice sounds 'real' and balanced is surprisingly small, and I find this 'quick and dirty' approach remarkably precise and effective.

I found the best stereo imaging and tonal balance was achieved with the speakers aimed slightly behind the listening position, particularly after I restored the HF equalisation to the flat position. With the system configured as a proper 2.1 array through the Pro Sub, the Pro Sats gained significantly more headroom and could play at silly levels (in a nearfield context) quite happily — although they do start to sound quite 'hard' at such elevated levels.

I was generally very impressed with the performance of the Pro Sub‑Sat system, but it was let down by a silly manufacturing problem. During my listening tests, there was a nasty vibrational rattle from the subwoofer when listening at moderately loud levels, which I quickly tracked down to loose allen‑bolt fixings in the driver chassis — some could be turned easily with just my fingers. Driver mounting bolts can work loose for several reasons, ranging from vibration during transport to extreme temperature changes in storage, and through extended normal use. It's always worthwhile to check that the driver fixings are secure at least once a year, as they do naturally tend to loosen over time, potentially leading to rattles or 'chuffing' if air can escape from the cabinet around the speaker chassis seal. In this case, however, the problem was that the bolts couldn't be tightened because they had been over‑tightened at the factory, effectively stripping the thread and rendering them largely useless. I raised this problem with the factory and it turned out to affect only a very small number of early production units, because of a minor manufacturing error.

Overall, then, the Acoustic Energy Pro Sub‑Sat system represents excellent value for money. The subwoofer is very fast, tight and tuneful, and integrates well with the Pro Sat (assuming the correct switch settings are used). It does seem less critical than some subwoofers about room placement, and certainly I found a position where it gave a well-balanced bass response very quickly. The Pro Sat monitors' greatest strength is their rock-solid stereo imaging, although they are also well balanced tonally and have sufficient resolution to make mixing a joy rather than a challenge.

The most comparable systems that spring to mind are the Blue Sky MediaDesk (reviewed in SOS January 2005) and ProDesk 2.1 (reviewed July 2003) systems, which cost a little less and a little more, respectively, than the reviewed AE ProSat/ProSub system. Another contender is the NHT M00/S20 system (reviewed in SOS March 2005).

One of the great things about this full-range 2.1 system is that it uses sealed-cabinet designs for both the satellite speakers and the subwoofer — and this results in an accurate time‑domain response. What's more, the bass-management facilities allow you to create configurations from 2.1 or 2.2 stereo to a full 5.1 surround system.