Adam have gained a strong reputation for the quality and value for money of their larger reference monitors, but have they had to make any compromises in their smallest model? 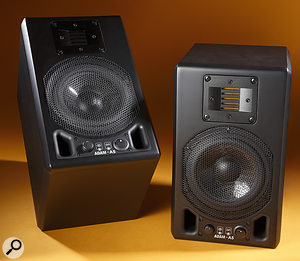 Photo: Mike CameronI was intrigued when I heard that Adam were to launch the A5 monitor speaker, as it is effectively the baby brother to the A7 — one of the monitors I use on a regular basis in my own studio. Adam's unique feature is their folded ART (Accelerated Ribbon Technology) ribbon tweeter, which I've discussed at length in reviews of their other monitors. Its concertina-like action moves approximately four times more air than a conventional, flat ribbon of the same frontal area, and this makes it both surprisingly efficient and able to handle frequencies almost an octave above the upper limit of human hearing.

In the A5, that same tweeter is teamed with a 5.5-inch woofer, using a cone material that's fabricated from a sandwich of carbon fibre and a specialist material called Rohacell. This produces a rigid, well-damped cone which, suspended in its soft-roll surround, bodes well for low-end clarity. The drivers are mounted in a neat and fairly conventional ported enclosure, with all the connections on the metal rear panel, which also serves as a heat-sink for the electronics. Two small bass ports are located at the lower corners of the front baffle.

Adam are clearly aiming the A5 at a wide target audience, with applications including MP3 playback, surround sound, computer games and desktop audio, but don't let the more frivolous applications distract you from what is, at its heart, a very serious professional tool. Weighing in at 5kg (11 pounds), the magnetically–shielded A5s measure just 285 x 172 x 200mm (11.2 x 6.8 x 7.9 inches). The review model was the 'Pro' version, which comes in a business–like matt–black cabinet, but they're also available in a glossy white or black 'piano finish'. A perforated metal grille protects the woofer, while the usual slotted metal grille covers the rectangular ribbon tweeter. Both drivers are neatly recessed into the front baffle, which has chamfered corners to match those of the main box. The overall impression is of a very smart and businesslike speaker.

Powering the two drivers are two 25W amplifiers, and these are, in turn. driven from an active crossover operating at 2.2kHz. On the rear panel there are controls for adjustment of tweeter level (±4dB continuously variable), and both 6kHz high–shelving and 150Hz low–shelving filters (±6dB), so that the user can compensate for room placement and personal preference. All three controls require a screwdriver (or tough thumbnail!) for adjustment. Power is delivered via a standard IEC socket, and there's a recessed switch used to set the mains voltage to a nominal 230V or 115V.

The line-level inputs are on the rear panel in both balanced XLR and RCA phono (unbalanced) formats, but the level control is on the front panel, alongside the circular power switch and blue power LED, which makes it easy to access. For those with no separate monitor controller, there are two additional stereo-link RCA phono inputs and outputs on each speaker, enabling the user to link them both via an included RCA phono cable — so you only need feed the stereo line signal from your DAW to one speaker. To do this, the slave speaker must have its level control set mid-way, so that you get the correct balance between the two speakers. As soon as the linking cable is connected, a white LED illuminates on the front panel to show the status of the system. You can't use the monitors balanced in linked mode, but that shouldn't cause any practical problems in most cases.

An optional subwoofer is available, either just to add more bass extension or to complete a 5.1 system using five A5s, and this takes the low end right down to 30Hz. Having said that, though, the A5 actually turns in a very respectable low–end performance on its own (±3dB 55Hz-35kHz), and in the smaller studio your mixes are less likely to be misleading if the speakers are used without a sub. In fact, the trade–off of having a smaller bass driver isn't so much less low-end but less overall level. The rating in this respect quotes an SPL of 101dB per pair, using a test sine-wave in the 100Hz to 3kHz range, measured at one metre, and 110dB SPL peak with normal music. Although not as loud as many larger monitors, this is still very loud at nearfield distances — and playback stays clean until well above a level that's comfortable.

With all the filter controls set to flat, the speakers maintained a surprisingly consistent sound with my own A7s, albeit with slightly less bass extension. The bass end is tight and well-controlled — which suggests that the designers have resisted the temptation to over-tune the port to make kick drums sound more impressive than they really are — while the top end exhibits the clarity and fast transient response that we've come to expect from the ART folded ribbon.

A lot of engineers will love the sound just as it comes, but I initially found the overall tonal balance just a hint too sizzly at the top end for my personal taste. A small adjustment to reduce the tweeter level by around 1dB and to pull down the 6kHz filter by a notch brought the sound neatly into my comfort zone, after which I set about auditioning some test material.

It didn't take long for me to confirm that the A5s really are just slightly scaled–down A7s: they have the same clarity and definition, as well as excellent stereo imaging; and given that some of Adam's speaker models are voiced differently, this is an important point to make. The A5s really are quite revealing, largely due to that unique tweeter — so if anything in the mix sounds a bit off-colour, they'll tell you, as good monitors should. By the same token, good mixes really shine, and given their size and price, there's nothing much not to like. Because the woofer is relatively small, the range of the two drivers meets nicely at the crossover point, delivering a confident and comfortable mid range, which is something that can't always be said of larger two-way monitors, where the woofer is sometimes asked to reproduce frequencies higher than is ideal.

In my own studio, which measures 16 by 11 feet, the A7s are probably a better choice than the A5s and obviously have a touch more bass extension, but I'd certainly be able to work on the A5s without any problem. Where the A5s score higher, of course — other than being lower in price — is that they can sit on a desktop and won't provoke too many low-frequency problems in smaller rooms.

Of all the small monitors that I've tried in this price range, the A5s are definitely up there with the best, and the neat linking feature really is a plus for anyone running their speakers directly from a computer soundcard. As well as being very capable studio monitors in their own right, they'd also work well as part of a surround system, and should actually match the A7s closely enough to work as rears in a system with A7s at the front. Although they're not exactly budget-priced, the A5s are nonetheless attractively priced for a speaker of this quality, and you also get the reassurance of a five-year warranty. So where you don't have space for larger monitors, or a suitable room, but you still need a reliable mixing tool, the A5s could be exactly what you need.

If you want to try some other small nearfield monitors to compare with the Adam A5s you should look at models such as the Fostex PM5a, Event ALP5, KRK RP5 and Genelec 8030A.

If you like the clarity and honesty of the A7s, you should like the A5s, which have essentially the same family sound but come in a more compact format well suited to smaller mixing spaces.