Their A7 nearfield monitors received many plaudits, not least in the pages of SOS, but manufacturers Adam thought there was room for improvement. 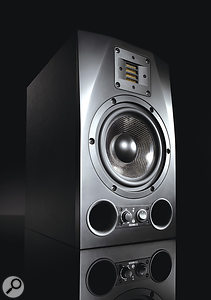 Last year, Adam set about updating their A‑range studio monitors to create the AX range. They've redesigned the drivers, used new electronics and, in the case of some of their larger monitors, they've added a mid‑range driver. Adam's A7 two‑way active monitor has proven to be a firm favourite with project studio owners, so I was particularly keen to see how the new A7X could improve on the original.

The Science Of ART

The common distinguishing feature of Adam monitors is the use of a folded-ribbon tweeter design, which is dubbed Accelerating Ribbon Technology, or ART — a concept that was pioneered by Dr Oskar Heil, but which has been optimised by Adam's own engineers, who have fine‑tuned the geometry and materials. What is really interesting, though, is the basic operating principle: the ART ribbon membrane isn't flat, like most ribbons, but corrugated, rather like concertina bellows. As audio is fed into the ribbon, the moving folds produce four times the air‑loading of a flat diaphragm of the same frontal area, and up to 2.5 times the acoustic output — so you could think of it as a kind of pneumatic transformer! A folded membrane also avoids the break-up modes of a flat surface, and because a larger area of ribbon is in contact with the air, cooling is also more efficient. Despite the larger surface area, the folded geometry means that the frontal acoustic aperture of the ribbon assembly can still be made relatively small, and as a consequence the dispersion pattern remains adequately wide.

If using a convoluted ribbon seems like an unnecessarily, erm, convoluted way of making a tweeter, the benefits cited for using ribbons in the first place include a more consistent impedance, as there's no voice‑coil inductance to take into account. The diaphragm is also freed of the inertial burden of a voice‑coil assembly, so if the design is done correctly, it's possible to build a high‑efficiency tweeter with a linear impedance and a close to perfect phase response within the operating frequency range. The neodymium magnetic arrangement used to drive the ribbon just happens to produce a natural magnetic shield, which is helpful — but in Adam's design there's no magnetic shielding around the woofer, so operation very close to old CRT monitors is inadvisable.

These new‑generation Adam monitors incorporate an update to their original ART ribbon tweeter, and they've called the revised version the X‑ART tweeter (if they'd called it ART‑X, it would have recalled a certain generation of textured paint!). Its frequency response now extends up to 50kHz, but the design is also a little more efficient than its predecessor and so can generate higher maximum SPLs. Now, I don't think even your pet bat is going to get much benefit from the extra frequency range per se, but a wider frequency response generally means an even flatter phase response within the band you can hear, so it isn't just a case of 'more for the sake of the spec sheet'. After all, if everything in your audio system had a 20kHz bandwidth (‑3dB), by the time your signal had passed through all the different units in the chain, the final frequency response would be way down at 20kHz.

Developing new extended-range HF drivers is one thing, but they need to be driven by adequately powerful, low-distortion amplifiers that have a greater audio bandwidth than the driver itself. Adam's design team apparently explored existing Pulse Width Modulation amplifiers but found that the necessary low‑pass filter compromised the frequency response of the ribbon tweeter, so they developed their own Class A/B analogue circuit, which works up to 300kHz. Again, this may seem excessive but it helps to maintain phase linearity. Adam have also doubled the output power of the amplifiers. The Class A/B amp driving the X‑ART tweeter is now rated at 50 Watts, while the mid/bass cone driver is fed from a 100W PWM amplifier. Both amplifiers can handle peak levels 50 percent above their nominal rating. The crossover frequency is set at 2.5kHz.

To complement the new tweeter, the seven‑inch bass/mid driver has also been re‑engineered, now featuring a larger, 1.5‑inch voice coil, and this is teamed with an amplifier having twice the power of that in the original A7. Adam's technical documentation tells us that the new model uses the same carbon/Rohacell/glass-fibre construction as the A7 driver; certainly the A7 and A7X woofers look pretty much identical from the front. An ideal speaker has a lightweight cone that doesn't deform or resonate, so that it can act as a true piston throughout its operating range. This well‑damped, laminated construction is more rigid than the more commonly‑used paper or polypropylene cones, and the increased power handling certainly seems to have helped out.

According to the published spec, the A7Xs have a frequency response of 42Hz to 50kHz, a long‑term output capability of over 106dB and a maximum peak‑level capability of 114dB. I certainly found that there was no shortage of volume for nearfield monitoring! The figure for THD (Total Harmonic Distortion), when operating at a level of 90dB at 1m for frequencies below 100Hz, is less than 0.5 percent.

Taking a step back, at first glance the cabinet design looks very similar to that of the A7's, with its satin black finish and 'stealth' chamfered upper-baffle corners, but a closer look reveals that it now has two front‑firing bass ports rather than the previous one, and the front-panel control section is now located between them, rather than over to the right. The box is also very slightly larger than that of the A7, measuring some 201 x 280 x 337mm, which is around 6mm taller and 15mm or so wider. The weight per speaker is 20.3lb (9.2kg). An even closer look also reveals that the apertures in the X‑ART tweeter front plate are wider than on the earlier ART tweeter, though the plate itself is the same size.

The control panel at the rear no longer shares space with a protruding heatsink, and the screwdriver‑adjustable rotary switches have discrete settings rather than being based on conventional pots, so each setting can be made much more precisely. You'll still find the power switch and volume setting on the front panel, where they can be easily adjusted, but the power LED is now green (blue is apparently no longer fashionable!).

To adjust the low frequencies, there's a shelving filter that operates below 300Hz and should provide adequate adjustment to compensate for speaker placement. It will also allow you to tweak the low end to your personal taste. The high‑frequency end has a volume adjustment for the tweeter feed, with a ±2dB range, teamed with a shelving filter operating above 5kHz. Both shelving filters have a ±6dB range.

I've always rated the Adam A7s as excellent nearfield monitors at their price point, so was rather taken aback when the A7Xs I set up alongside them sounded noticeably better in every respect. The low end seemed more natural, the highs were airy and smooth, and overall the sound was cleaner and more three‑dimensional. I felt a real sense of separation between the component parts of a mix, with a much enhanced impression of front‑to‑back perspective. Given the way in which most modern music is recorded and mixed, any sense of depth is largely illusory, created by the clever use of balance, EQ and synthetic ambience, but the A7Xs interpret the mix engineer's intentions in this respect extremely well. I also felt that vocals sounded more natural, with less coloration. If I had to draw an analogy with photography, I'd say the sound was more in focus and had a greater depth of field, but the difference also reminded me of switching from a cardioid microphone to a good omnidirectional model.

Ported speakers can have the effect of emphasising a specific range of bass frequencies, and many manufacturers tune the speaker ports so that kick-drum and bass‑guitar fundamentals are given a bit of a lift. This is one way of increasing the subjective level of bass from smaller nearfield monitors. I thought that the original A7s were less hyped than most in this respect, but again the low end of the A7Xs feels even wider and more extended. All my tests were done with the rear‑panel controls set to flat, though there's enough 'fiddle factor' available to compensate for general room-position variations — as long as you don't put the speakers right in the corners of the room, of course.

The Adam A7 was, and still is, an extremely good studio monitor, given its affordable price, but the updated A7X sounds significantly more refined. Getting such a strong and transparent‑sounding mid‑range from a two‑way speaker is quite a challenge, but Adam seem to have managed to coax something like a three‑way performance out of a two‑way box — and to have done so without sacrificing bass end or high‑frequency extension. The extended range of the new tweeter allows the top end to sound more open and airy without adding harshness, so vocals come across in a very natural way. Most users will be more than happy with the low end performance, and shouldn't feel the need to add a sub. Furthermore, because these speakers are relatively compact, the stereo imaging is excellent too. The A7X costs a little more than its predecessor — but I can assure you that it is worth it.

In this price range, the most obvious competitors are the smaller Genelec monitors, Mackie's HR624 MkII and Dynaudio's BM6A MkII. There are also cheaper alternatives with ribbon tweeters, specifically the Samson Rubicon 6A.

If you like the original Adam A7s, you'll love these.