For 50 years, the RS124 compressor has been a secret weapon at Abbey Road Studios. Now it's targeting our plug‑in folders... 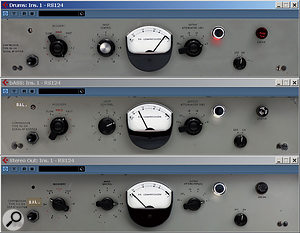 Developed by Scandinavian plug‑in maestros Softube, RS124 is Abbey Road's latest attempt to share with the world some of their proprietary, in‑house gear. The hardware originals were first introduced in 1960, and are still in use at Abbey Road in St John's Wood today, but have never been commercially available. Like most custom designs, the original RS124s have also undergone extensive modification over the years, and such is the variation between hardware units that this plug‑in version models three separate RS124s, all of which sound noticeably different. The plug‑in version comes in TDM and all the usual native Mac and PC formats, and is authorised to an iLok key.

Cream Of The Crop

By design, the RS124 is a mastering compressor, although some of the modifications that have taken place over the years increase its versatility as a tracking and mixing device too. Abbey Road's Director of Engineering, Peter Cobbin, who oversaw its recreation as a plug‑in, describes its sound as being like "pure cream being drizzled slowly into and over a mix”, and first impressions very much live up to that description. As is commonplace with vintage compressor designs, there's a fixed threshold and ratio, with the amount of compression being controlled by varying an input gain knob. There's no user control over attack time, but release is continuously variable — albeit, for the most part, between 'slow' and 'funereal'.

Initially, then, the obvious perception is that RS124 is one of those character pieces that only does one thing, but does it extremely well. It certainly has a velvety smoothness that I can't recall hearing from any other software mastering compressor, a smoothness that could probably make an Atari Teenage Riot master sound lush and enveloping. Yet with even the fastest release times appearing to operate on a geological timescale, it's not immediately obvious that the word 'versatile' could be applied.

Delve a little deeper, though, and it becomes apparent that RS124 is more than a one‑trick pony. Clicking on the serial number at the left‑hand side allows you to switch to one of the other two emulated hardware units, which sound noticeably different. The third has been modified for faster release times, to the point where, on sufficiently down-tempo material, it can almost recover from one kick‑drum hit before the next one arrives! An 1176 it is not, but this does take it into the range where it becomes a useful tracking and mixing compressor, allowing its rich and colourful sound to be used to good effect on sources such as bass and vocals.

Click on the fuse holder at the right, meanwhile, and you activate something that's exclusive to the software version of the RS124: Superfuse mode. This sets the release time to be the same as the attack time (which is slightly different on each of the three models), effecting a drastic alteration in the unit's character. Velvety smoothness gives way to ballsy punch, which is perfect for livening up a drum submix.

My only real reservation concerns the make‑up gain control — or, rather, the lack of it. In an arrangement that is presumably faithful to the original, you can attenuate the output by up to 30dB, but you can't boost it. This isn't quite as odd as it sounds, because cranking up the input gain sometimes does result in the output getting louder, but even so, you'll usually find yourself having to make up lost level with a fader or another plug‑in.

All in all, though, RS124 is a very nice plug‑in that has its own distinctive character. You probably wouldn't want it to be your only compressor, but the chances are that you'll usually find a place for it somewhere in your mix — and depending on what sort of music you're making, there are likely to be occasions when it does something no other plug‑in compressor can.

The RS124's Recovery or release time control includes a Hold setting, which fixes the amount of gain reduction, arresting the release of the compressor until you switch it away from Hold again. The idea is that you can 'prime' the compressor at the start of a song, to prevent an initial burst of high‑gain signal coming through before the gain reduction kicks in; you can also use automation to activate Hold at the end of your song, to stop the signal level rushing back up as your final chords are dying away. You'll need it, too, as this is the kind of compressor where you can easily apply 20dB of gain reduction or more!

Abbey Road's RS124 is another quirky yet great‑sounding plug‑in, and is capable of producing some of the smoothest compression you're ever likely to hear.