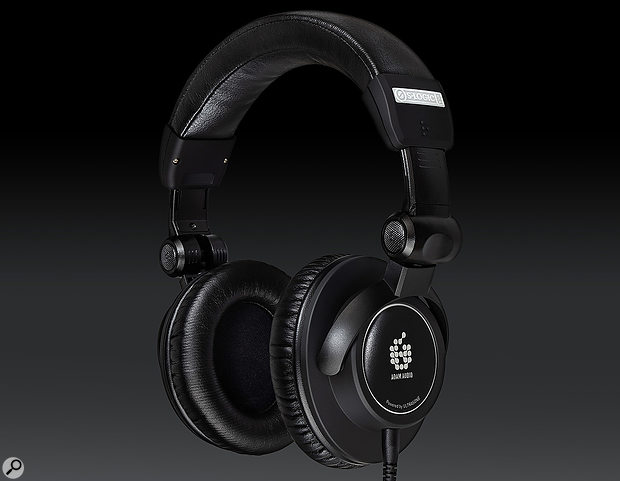 We put ADAM's debut headphones to the test.

When loudspeaker companies want to diversify, the headphone market is an obvious target. However, the two fields require quite different design expertise and manufacturing capabilities, so it's not a trivial transition by any means. ADAM Audio are the latest loudspeaker manufacturers to make this move, and rather than undertake all this extra work themselves, they've cannily teamed up with established German headphone makers Ultrasone. The result is the Studio Pro SP‑5, a pair of closed-back, moving-coil headphones that are branded ADAM Audio but "Powered By Ultrasone" and which are visually identical to the models in Ultrasone's own Signature range.

Ultrasone are predominantly a consumer brand, but on first inspection, the SP‑5s tick many boxes that will be important to professional users. They come in a smart and robust carry case, albeit one that is rather large and has no handle with which to pick it up. They have replaceable ear cushions and detachable cables, and the earcups rotate along both vertical and horizontal axes, meaning that most listeners should be able to achieve a reasonably comfortable fit. Being circumaural, they also offer a decent level of isolation from external sounds.

The cables attach using a locking 2.5mm jack socket at the base of the left earcup. Two cables are supplied: a 1.2m straight cable terminating in a 3.5mm mini-jack, and a 3m coiled cable with a 6mm jack on the end. Both felt a little on the short side to me, and it's a pity ADAM chose not to fit the longer one with a screw-on adaptor so it could be used with mini-jack sockets.

Apart from the thoughtful inclusion of Braille lettering to indicate which earcup is which, the physical design of the SP‑5s is conventional. The frames and earcups are made of rigid plastic, and at 290 grams, they're reasonably lightweight. Build quality seems perfectly fine, but I have to say I was a little surprised when I found out how much these headphones cost: outwardly, there's nothing about their design or construction that immediately marks them out as a premium product.

However, it's what's inside that counts and, in this case, what's inside is a pair of drivers that use Ultrasone's S-Logic technology. This employs "decentralised driver positioning" to fire sound around the ear rather than directly into it, allegedly reducing the risk of hearing damage whilst delivering "natural surround sound" and a more speaker-like listening experience. The specifications list a frequency range of 8Hz to 38kHz, with no tolerance given. Impedance is quoted as being 70Ω, with sensitivity listed as 95dB for a 1mW input, and I had no problem driving them reasonably loud from a low-powered headphone amp.

To my ears, any benefits that S-Logic delivers are pretty subtle, and are overshadowed by the distinctive voicing of Ultrasone headphones. Your first response on hearing a pair of Ultrasones is not likely to be "My goodness, I'm experiencing surround sound!" or "This is exactly like listening on monitor speakers!", but you may well find yourself thinking "Crikey, these are bright!" — and the same is true of the ADAM SP‑5s.

This is interesting, because ADAM claim that these new phones have been voiced to match their own loudspeakers. I've worked on ADAM nearfields in the past, and they do have a certain sparkle about them, but this is something you can learn to compensate for fairly easily, and which can even be beneficial in an over-treated control room. By contrast, I never quite felt comfortable with the prominent treble on the SP‑5s. You certainly won't miss any bad edits or hiss problems, and they seem to present a relatively smooth broadband boost rather than a peaky, uneven response. However, in a mixing context, their brightness can leave you second-guessing about the tonal balance of your track, and about whether vocal sibilants or spitty hi-hats are really problematic.

In my view, the best aspect of the SP‑5s' sound is the way they present the other end of the frequency spectrum. The fundamentals of bass notes come across in a clear and articulate fashion which makes it easy to follow a bass line and pick out individual instruments and drums. I suspect, though, that this clarity at the low end is partly a product of the rather lean mid-range; if you like to hear a lot of meat and punch in the low-mids, you won't find it here.

Personal preference has a big role to play in the choice of any monitoring tool, and when it comes to headphones, I find a neutral or even a slightly mid-heavy frequency response most useful for mixing. Other engineers do prefer a 'scooped' sound, though, and the SP‑5s will have more appeal to those whose tastes run to the brash and bright. They are also more than capable of fulfilling all the other duties of general-purpose studio headphones, such as feeding cue mixes to musicians for overdubbing.

The real challenge that ADAM face is convincing customers that their phones are worth the substantial extra outlay compared with comparable models from other manufacturers. If you want a good pair of closed-back studio phones and you welcome a bit of subtle flattery at either end of the frequency spectrum, there are plenty of good options available for quite a bit less. Individual preference being what it is, the SP‑5s might well be perfect for you, but you'd want to audition them alongside the likes of the Focal Spirit Professional and Audio-Technica ATH-M70x to see whether they really do justify their price tag.

With their first headphones, ADAM Audio have made a bold stab for 'flagship product' territory. The SP-5s are very capable, but the price tag and their 'smile curve' voicing mean their appeal won't be universal.