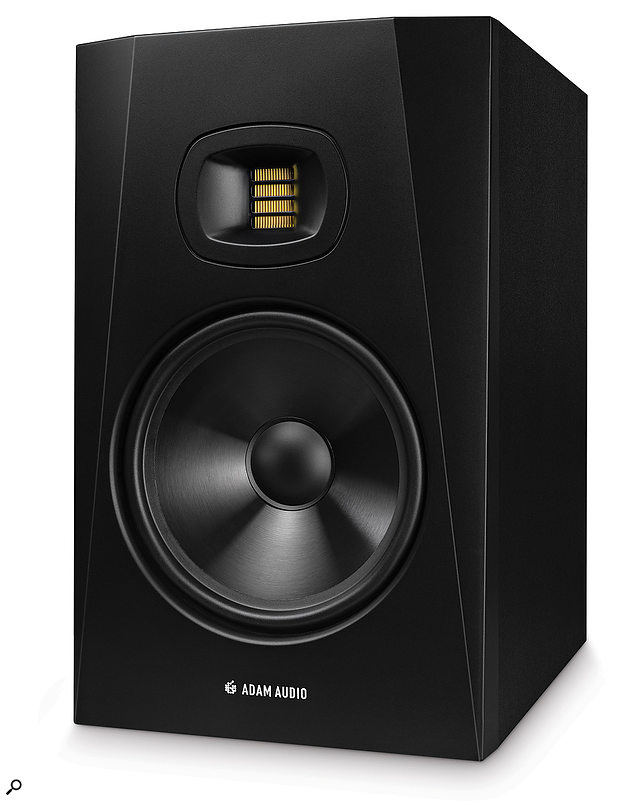 The new flagship of ADAM's T‑series offers serious bass extension even for those with limited budgets.

ADAM Audio's T‑series of affordable powered monitors are designed in Germany, but built in China to keep the costs down. Despite their affordability, however, they are still based around ADAM's highly regarded Accelerated Ribbon Tweeter. Originally the range comprised a 5– and a 7–inch model, but those have now been joined by the 8–inch T8V. All three models are available individually for the benefit of those setting up a surround system, and all use the same 1.9–inch U-ART high-frequency driver and the same smooth polypropylene–woofer cone construction, with both drivers mounted into a distinctive bevelled baffle. This fronts a plain black vinyl foil-covered cabinet with overall measurements of 400 x 250 x 335 mm. A rear-firing bass reflex port exits through a steel backplate, which also houses the connectors and controls.

As with many modern active monitors, the control circuitry is digital and in this instance includes DSP-based active 2.6kHz crossovers, response equalisation and driver/amplifier protection. All three monitors are compatible with the ADAM Audio T10S subwoofer, though for most home studio rooms, the T8V should be able to deliver the goods without needing help from that quarter. Indeed, that 8-inch woofer provides bass extension right down to 33Hz, while the U-ART tweeter's folded diaphragm reaches up to an impressive 25kHz. The tweeter is fitted with a waveguide designed to match the dispersion characteristics of the High Frequency Propagation (HPS) waveguide used in ADAM Audio's rather more costly S‑series monitors, resulting in a wide listening sweet spot.

...these are impressive little monitors that sit comfortably within ADAM's sonic orbit...

A Class–D bi-amp pack provides 20W (RMS) to the tweeter and 70W (RMS) to the woofer. A pair of T8Vs can produce peak SPLs of 118dB at 1m. Both balanced XLR and unbalanced phono inputs are provided, with a slide switch to select between them, but there's no jack input option. Power is via the usual IEC connector and there are a couple of three-way slide switches offering -2dB, 0dB and +2dB adjustment for both the LF and HF. The green power LED is on the rear panel, which is a little impractical given that the rear panel is usually out of sight during operation.

Sonically these speakers give a very good account of themselves, especially given their position in the market, coming over as punchy, detailed and revealing, with no unforgivable vices. They also present a credible stereo image with a usefully wide sweet spot. In a slightly unfair comparison, my Event Opals produced a slightly tighter, more solid bass end and smoother highs — but they are also far more expensive. Importantly though, such technical imperfections as they do exhibit won't get in the way of their ability to help you produce a reliable mix. As with any monitor, you just need to take some time to get used to them.

In context then, these are impressive little monitors that sit comfortably within ADAM's sonic orbit, and given their low price, they don't sacrifice nearly as much as you might imagine. There's also a two year warranty that extends to five years when you register your speakers with ADAM Audio.

Even the most expensive monitors involve compromise, but in the more pragmatic and cost-sensitive world of home studios, the T8Vs do a solid job at an attractive price.