The Age Of STEAM

With a new synthesis engine, some new ideas about interface design and 50GB of novel samples ranging from lightbulbs to burning pianos, Omnisphere will be Spectrasonics’ biggest soft synth yet. Its creator, Eric Persing, gives us a sneak preview. 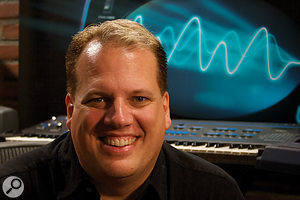 Photo: Eric PersingFor the past few trade shows I’ve attended, I’ve tried to find out what Spectrasonics’ Eric Persing was working on, and it turns out that the big secret is Omnisphere, a software synth based on a new engine developed especially for Spectrasonics. They call it the STEAM Engine, and according to Eric it will, in the future, power all Spectrasonics’ non–Groove–based instruments. “This completes our transition from a sound library company to a software instrument company,” explains Eric. “Initially we were licensing an audio engine from a third–party company, and to start with that was a great advantage, as it allowed us to get those instruments out [Stylus, Trilogy and Atmosphere], but we started to have new ideas and found we were going in a different direction, which led to the decision to design new engines of our own.”

The SAGE engine used in Stylus RMX was the first of these, but STEAM is more oriented towards synthesis, allowing the user to process samples using techniques such as FM, polyphonic ring modulation, advanced waveshaping, granular synthesis and ‘Harmonia’. Unlike existing synth–based instruments such as Atmosphere, the STEAM engine will also be compatible with Intel Macs, and with over 50GB of samples, Omnisphere will be the ‘flagship’ STEAM product. “Omnisphere will replace Atmosphere, as it can do everything Atmosphere does, but there will be an upgrade path for Atmosphere users.”

Eric has a long history in the business, including many years spent as a sound designer for Roland, and the key concept behind Omnisphere is something he sees as an evolution of his existing ideas in combining synthesis with sampling: ‘psychoacoustic sampling’. “Sampling is often used for emulating acoustic instruments, but we’re getting back to the early days of sampling as exploited by people like Peter Gabriel, where we take organic sounds and use them as a source to create new sounds. We can do things now that wouldn’t have been possible back then, such as the lightbulb sample, which requires a huge amount of low–noise amplification. We can also apply noise reduction in the digital domain, so now we can capture the essence of that lightbulb filament, pull it out and turn it into a unique sound, creating a multisample set that reacts to the engine in different ways.”

Another example is a Rhodes piano sound where the sound is amplified into an acoustic piano so the sound can be sampled along with the resonating piano strings. “Using ‘real’ resonators you can get these wonderful colours that make the sound more organic, then when you add the processing, you’re processing the organic source and not just an electronic wave. It’s the same as running a guitar through effects — the result is very different to running a synth through the same effects.”

The demo I heard at the NAMM show was limited and some of it was quite abstract–sounding, as Omnisphere was then a fair way from completion. I tried to pin Eric down on what Omnisphere is and isn’t. “I certainly wouldn’t call Omnisphere a workstation, though I know there’s a group of people who would like to see us do a software JV1080 or something like that, but this is really geared towards creating new sounds. We’ll take a sound like like an acoustic piano and approach it differently — we have the sound of a burning piano, for example — but we also have an acoustic piano played in a cathedral with a beautiful natural ambience.” 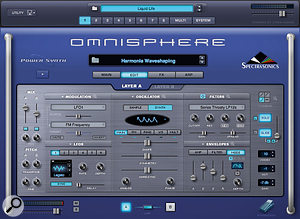 Omnisphere’s Edit Page abandons the ‘Easy Edit’ concept from Stylus RMX, instead presenting all parameters within a series of increasingly low–level pages.Previous Spectrasonics instruments such as Stylus RMX have featured separate Easy Edit pages, as well as a full editing interface with detailed control over all parameters. It turned out that most users were happy to grapple with the full editing interface and the Easy Edit window was little used, so that philosophy has changed in Omnisphere. Instead of an Easy Edit mode, the pages in Omnisphere are arranged to make the process more progressive, such that the controls you’re most likely to need are the easiest to find. Eric: “Instead of dumbing it down and saying these are the only three knobs you need, we put the essential stuff first, such as attack and release, master filter, levels and so on. Deeper stuff is on subequent pages.” 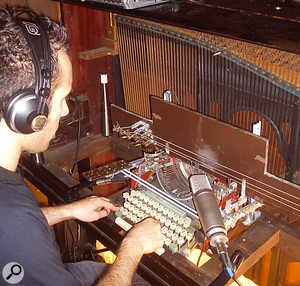 The ‘TypoSonic Machine’, an instrument constructed by modifying a manual typewriter, where the key-strikes hit bass guitar strings. When it is acoustically coupled to the upright piano, the piano strings create sympathetic vibrations and amplify the sound. That makes a lot of sense to me, because although most musicians know what to expect when they change an envelope or a filter, things are far less intuitive with complex modulation setups. “That’s why we spent a lot of time re–evaluating the way we handled modulation, because here you can also modulate all the effect parameters. We went through a lot of GUI designs to keep that familiar interface but still with lots of power once you get into the depths of it. It’s nothing like the modulation in Atmosphere or any of the other instruments, because although you have all the power of a modulation matrix, you can assign it directly from the control. For example, you right–click on a knob and say ‘Modulate this from an LFO,’ but you don’t have to think about which LFO. If the first LFO is already in use, the system will assign you a free one and I don’t think that’s been done before. Also, the GUI changes to show you the latest thing you selected, so you’re always looking at something relevant. However, if you want to select things manually, you can do that too. And of course we’ll have the usual big library of presets to get people started.” 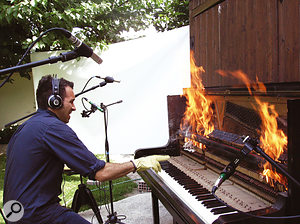 Spectrasonics Sound Designer Diego Stocco sampling the infamous ‘Burning Piano’ for Omnisphere. You only get one take!In some respects, it sounds as though Omnisphere might be comparable with instruments like the Korg Wavestation and Native Instruments’ Absynth. “Absynth is a wonderful instrument and we can do similar things to what their resonators do using our comb filters, but they will sound different, as well they should,” says Eric. “You can also apply key tracking to the resonances, to make them track the keyboard, and it is also easy to sequence the resonant frequencies using mod envelopes, where the time grid can be musically related to, for example, triplets — and you can select half time or double time. It also crosses into what the arpeggiator does, and the interface for that is really easy to use too, with a TB303-type grid. There’s a lot there but it is easy to create things that sound very rich and complex. There’s no Wavestation–style wave sequencing as such, but the system is eight–part multitimbral and there’s a mode for stacking up to eight parts, so you can emulate some wavetable–synth type sounds.” 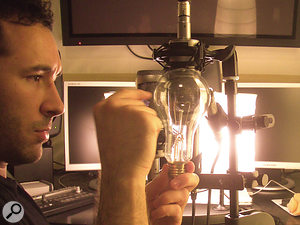 A highly resonant metal washing machine interior mechanism is connected to a bass guitar neck and strings. Notes on the bass are played and ring inside the washer body, creating a natural stereo field with a unique set of overtones. 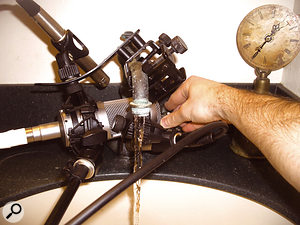 The filaments within light bulbs resonate when the glass is struck; the sound was then amplified many thousands of times to create the ‘Luminosonic’ sound source in Omnisphere. 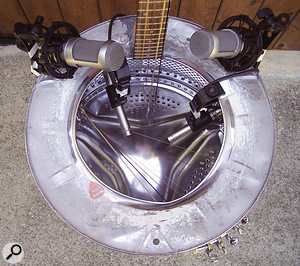 Miking water pipes to create the elements for the ‘Streamsonic’ psychoacoustic sound sources in Omnisphere.Omnisphere was already working at the time of the NAMM demo, but the release date was set for September, nine months later, because there is so much work involved in the preparation of the core sample library, as each sample has to be tagged with metadata. “Stage one of STEAM engine development is completed and Omnisphere is in its final beta phase as you are going to press. The hardest work at the moment is the finalisation of the huge core library. Tagging and imaging the sounds is a major process, because coming up with all the moods, attributes and descriptions takes time. There are thousands of samples to work through, where a single patch may use a large number of samples. The sample set is the lowest building element of a sound, but below that there are the different multisamples, articulations and ‘round robin’ samples, which have to be individually labelled. We also have to create tutorials on how to use the synth, which is why we set a September release date — we want to be sure we’ve given ourselves enough time to get it right.”

I can’t wait to give it a spin to see what it can do!

A lot of Spectrasonics users will want to know if it’s possible to load existing sample libraries, Spectrasonics or otherwise, into Omnisphere. The short answer turns out to be no, at least for the moment, but Omnisphere’s sound library will come with a bonus section that includes the best of all the existing Spectrasonics sample libraries, such as Symphony Of Voices. Eric describes this as liberating the samples from what he calls the ‘Akai world’, as processing them via Omnisphere can turn them into something completely new.