Making your mic stand out from the crowd these days is difficult - so Latvian company Violet have used their head...

Photo: Mike CameronThe budget studio condenser (capacitor) microphone market is positively bulging at the seams these days — and to be honest, if you're prepared to spend over £100 you're likely to get something that is perfectly acceptable for home studio use. Double the budget and — surprisingly for an old timer like me brought up on thousand-pound studio mics — it's now hard to find anything that really disappoints. Surely 'value for money' has never been such an apposite term.

And so it is with Latvian manufacturer Violet's Black Knight, a microphone we're told is proving very popular. Of course, in such a fiercely competitive marketplace, everything needs a unique selling point, just to provide some product differentiation. For the Black Knight, that USP is a movable head, mounted rather cleverly on a ball joint. I know it looks broken in the picture overleaf, but it really is supposed to do that, honestly! The head can be rotated roughly 80 degrees left or right of centre, and tilted up or down by 20 degrees or so. Supplied in an attractive wooden box, the mic sits on a pair of felt-lined cradles, held safely in place with a screw-down strap — fiddly, but secure. As shipped, the package also includes a polystyrene insert to provide more serious impact protection for the capsule, but if you want to make a better impression when taking this mic out of the cupboard, it could be removed without affecting day-to-day protection.

In most respects, the Black Knight is a fairly conventional studio microphone, a true capacitor design externally polarised via 48V phantom power and drawing a very undemanding 2mA. The 27mm capsule is based on a large, dual-diaphragm Braunmühl-Weber element, using 6-micron gold-sputtered Mylar, tensioned on a brass backplate. It provides a fixed cardioid pickup pattern and has no facilities for a pad or bass roll-off. The impedance converter circuitry is solid-state, fully discrete, class A and transformerless — and Violet recommend teaming the Black Knight with a valve preamp for the best of all worlds.

Just bashing through the tech specs, the output impedance is a nice low 50Ω, so it's not going to be fussy about cables or preamp input impedances. Its sensitivity is given as a very healthy 33mV/Pa, so you won't need a lot of gain in most home studio applications either. The self-noise is given as a remarkably low 6.5dBA, which is pretty much the state of the art, and the maximum SPL (for 0.5 percent THD) is a respectable 134dB. That gives a potential dynamic range capability of 128dB or so, which will push the capabilities of your interface's A-D converters... The mic body measures 208 x 44mm overall, weighs 450g, and is finished in a textured matte-black paint with the gold capsule just visible through a fine, single-layered, black-wire grille. The moulded Violet logo marks the front of the mic's pickup pattern, and a gold-painted badge on the rear denotes the model name and serial number. The review model was supplied with a simple ring stand adaptor (complete with 3/8-inch adapter) which screws to the bottom of the mic, but a bespoke elasticated cradle shockmount is also available.

Violet suggest that the Black Knight is intended to serve as a general-purpose studio mic for applications including drum overheads, percussion, acoustic piano and guitars, strings, woodwind and brass and, of course, vocals. To that end, it appears to have a commendably flat frequency response, with a mild presence lift of a dB or two between about 2.5 and 4kHz. The bass is well extended and pretty much flat down to 40Hz too (the specifications claim a bandwidth of 20Hz to 20kHz, but give no amplitude tolerances). Sadly, Violet haven't provided any polar response plots — something that always rings alarm bells — but practical tests revealed that its response is at least hypercardioid, and verging on almost figure-of-eight across most of the spectrum. It's certainly not a cardioid in my book, as the rear pickup, especially for close sources, is surprisingly strong and the rejection is greatest at around 115 degrees on each side.

The Black Knight looks very professional, and certainly more expensive than it really is. The unique movable head design is certainly a talking point, too! I thought it was just a gimmick at first, but I quickly grew to appreciate the flexibility it affords when fine-tuning the mic's position in front of an instrument. Instead of having to loosen the various stand clamps, often I could achieve what I needed simply by rotating or tilting the head, which is obviously easier and quicker. It is possible that the mount could become loose and floppy over time with extensive use — obviously I have no practical means of knowing for sure — and I can't see any means of adjusting the stiffness of the mount. But I may well be worrying over nothing here, and as supplied the mic capsule was easy to adjust but always stayed exactly where I placed it. 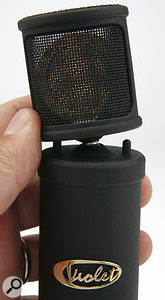 The tilting head may look like something of a novelty but can prove surprisingly useful in practice.Photo: Mike CameronThe sound quality is commendable for such an affordable mic. It has a wide, extended bandwidth, and although there's a hint of forwardness through the high-mid — that 3kHz bump in the response — there's no obvious tendency towards the harshness that some budget mics can show (usually caused by HF resonances in the capsule). In most cases, that gentle forwardness will be helpful on typical home studio sources like voices and acoustic guitars, but equally, it tended to work against the source in some purist instrumental recordings (piano, in particular). I found myself instinctively dipping the EQ around 3kHz on more than one occasion. (I guess my ears have become used to the ruler flat response of the Sennheiser MKH40, which is my go-to general-purpose mic!) The bass is well extended and the proximity effect well controlled, even when used for close vocals — a benefit of the Braunmühl-Weber double-diaphragm capsule — and the top end is smooth and reasonably open. I have 'airier' mics in my collection, but the addition of some gentle HF shelving above 12kHz helped the Black Knight to shine when I needed that quality.

During the review period I had to record my own spoken voice for a phone interview in a BBC World Service radio programme. The BBC end of the conversation was recorded in a studio along with my telephone contribution, while I recorded my end locally. I then sent them a CD of my recording, and they replaced my phone voice with my local recording. The end result makes it sound as though I was in the studio with the interviewer, even though I was sitting in my lounge, looking out at the garden. We were all pleased with the results, and you certainly couldn't tell that my voice was captured on a mic that cost a fifth of the price of theirs! While rigging the mic for this recording, one thing became obvious very quickly: a pop screen is essential. The fine-mesh grille may help to deliver a crisp and open top end, but it's no good at catching plosives, so budget for a decent pop screen. On a positive note, I was surprised by how well the mic managed to ignore mechanical vibration through the stand. A proper suspension cradle would be a worthwhile investment, but I wouldn't say it was essential: a useful benefit of the single-point capsule mounting, I expect.

Violet's suggestion that the Black Knight can be thought of as a general-purpose studio workhorse proved to be a fair one. I was able to capture a credible sound from everything I tried it on — both male and female vocals, spoken voice, cello, upright piano, acoustic guitar (six and 12 strings), hand percussion, as a single drum overhead, and as a snare-drum mic on a jazz kit. Although I didn't always end up using the Knight for the recordings, it was never rejected because it produced an unacceptable sound — only because one of my other (inevitably more expensive) mics produced an alternative sound that we preferred at the time. If I only had the Black Knight in my armoury, I have no doubt that I could very easily have made extremely satisfying recordings. I'm not sure I would use the mic on a rock snare because of its maximum SPL rating, but on the jazz snare (using brushes much of the time), it was excellent — not least because the swivelling head made it really easy to find the sweet spot on the batter head. The hypercardioid-esque side null worked well to control hi-hat spill, and it also handled the transients very nicely, as it did on the acoustic guitars.

Overall, I was very impressed with this mic. It deserves to do well, because it is a very accomplished and well-balanced design, offering real value for money, and would make an excellent first mic for anyone setting up a home studio on a reasonable budget, easily delivering quality results from any source. Recommended.

To help me develop a shortlist of alternatives for the Black Knight, I used the search engine on the www.microhone-data.com site to find mics of similar specifications and price. The only ones it found were the Rode NT1A and the Black Knight's own stablemate, the Violet Dolly. The reason for this paucity of alternatives is because I specified mics with a self-noise below 7dBA — and it goes to show just how special the BK is. Opening the window a little to accept mics with self-noise below 10dBA admits a few more, including the CAD M177, JZ Microphones' JZ1, and Rode's NT2. Of those, my favourite alternative would be the CAD M177, which has proved itself to be a good all-rounder with a benign sonic character — and it is even more cost-effective than the Black Knight. But the latter's movable head would probably swing the decision in Violet's direction for me if I was looking to invest today.

A very cost-effective and versatile studio mic that performed extremely well in the studio on a wide variety of sources. Its unique feature is that clever movable head, which proves surprisingly useful in practice.