As Live has gradually made the transition towards fully fledged DAW, the recording side of the program has become increasingly sophisticated - so we're going to look at some tricks to make basic recording easier. 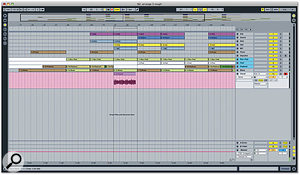 I've not done a survey, but I'm guessing that most Live users do the majority of their recording in the Session view. This way of working is, after all, one of the main things that sets Live apart from the other DAWs. However, there are many occasions when it's more appropriate to record into the Arrangement view. For example, once you've fleshed out the main structure of your song and assembled it in the Arrangement, you may want to overdub some extra fills and points of interest, or even add vocals or (if you must) guitar.

Let's focus on a typical scenario. You've created the basis of a track by recording a number of Clips in the Session view, then you've recorded them as a song in the Arrangement view. Now you want to record a vocal performance over the top. This is best achieved in a traditional linear fashion, by recording directly into Live's Arrangement view.

First, create a new track, and assign its input to wherever your mic is connected. You can make all the settings from the Arrangement view if you have the routing (the 'I/O' button) and mixer (the 'M' button) views enabled at the bottom right of the tracks area. Unfold the track you're going to record into, so that you'll be able to see the waveform (as in the screen above).

The 'back to Arrangement' button (third from right) stops all Session view Clips from playing and plays all Arrangement tracks.Recording into Live's Arrangement view works in a similar way to recording to tracks in most traditional DAWs. First, arm the track and make sure that the input is appearing on the meters. If you need to arm more than one track you can Control-click (Windows) or Command-click (Mac) subsequent record-arm buttons. Recording is initiated with the main Record button in the control bar at the top of the screen. You can either start playback first and then punch in, or click Record and then Play to commence recording immediately. You can even put the Arrangement into record with no tracks armed, then punch individual tracks in and out of record by clicking their record-arm buttons. By default the keyboard shortcut for 'record' is F9.

If you begin recording and regions start being written into other, unarmed tracks, this means that some Clips are playing in the Session view. To fix this, undo the recording, then press the 'back to arrangement' button in the control bar (as in the screen above). One notable difference when you're recording in the Arrangement is that there is no quantising of the time that recording starts and stops. Armed tracks will drop into record instantly when you press the record button.

Beyond the basic recording procedure above, there are a number of helpful features that automate the process of dropping in and out of record. This allows you to slot overdubs precisely into the correct location, and is also useful when you are recording on your own and don't have any hands free.

The Punch In and Out and Loop controls in the main control bar.The screen above shows the Punch and Loop controls that appear in the control bar. These are used to set In and Out points for playback looping, record punch-in/out, and loop recording. The value on the left represents the In point in bars and beats, and the other value is the length between the In and Out points. These points are also represented graphically in the time ruler area above the timeline (as can be seen between bars 81 and 97 in the main picture on the previous page). The simplest way to set In and Out points is to trim this so-called 'loop brace' with the mouse. As well as adjusting the start and end points, you can pick up the loop brace in the middle and move it without changing its length. If you select the loop brace, you can nudge it by the grid value using the left and right cursor keys, and by its own length with the up and down cursor keys. Yet another useful trick is to right-click any selection in the Arrangement and choose 'Loop Selection'.

A count-in can be specified here, but it's better to use the automatic Punch-in feature and set your own pre-roll.The three buttons between the loop values enable Punch-in, Looping and Punch-out. With Punch-in activated you can hit record before the In point and Live will wait until that point is reached before dropping into record. Unsurprisingly, Live will drop out of record automatically at the Out point. You can activate either button independently, or use both at once to specify a precise window to record into. We'll come to what happens if you record while looping is enabled in a moment.

Pre-rolling can be handled manually or automatically. The manual approach is simply to click in an empty part of any track to drop the cursor. Click Record, then click Play, and Live will play back from the cursor, then drop in at the Punch-in point. To use an automatic pre-roll, open the Preferences and switch to the Record / Warp / Launch tab. Choose a one-, two- or four bar count-in, as in the screen above. The count-in is only used if the Punch-in button is deactivated. An important difference between the two options is that the count-in only plays back the metronome, and not the Live song. Using the Punch-in method is therefore preferable, as you can listen to the rest of the song during the pre-roll. Finally, if you're not already familiar with how track monitoring modes work, check out the 'Monitoring Modes' box.

In many cases, you'll have a few goes at recording each of the overdubs you need until you get a take you like. However, sometimes you'll want to keep several takes so that you can choose one later, or edit together the best parts of several takes. The most straightforward approach to this is to use several duplicate tracks and record each take onto a different track. Simply set up your record track, then right-click it and choose 'Duplicate' as many times as you need. Unlike many DAWs, Live allows you to have multiple tracks with the same name, but you can rename them if you prefer. Keep all the tracks that you aren't currently using muted (using the yellow track-number buttons), so that you don't hear the input multiple times. 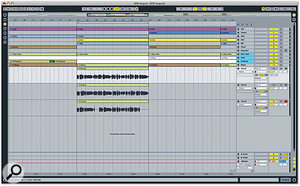 Multiple takes can be recorded and managed easily on duplicate tracks.Once you've recorded a few takes, you'll want either to pick one that you like best, or compile ('comp') the best bits from each track. If you decide to comp, choose your favourite sections from each take, then remove everything else (as in the screen above). Several editing techniques can be employed to achieve this. You can trim regions, by moving the mouse to the edge of each audio Clip and dragging left or right. You can also delete sections by dragging out a selection and hitting Delete or Backspace. Finally, you can split Clips up by dropping the cursor (or making a selection) and typing Ctrl-E (Windows) or Command-E (Mac). When you're left with just the best bits, drag all the Clips onto one track, and delete the tracks you no longer need.

Track monitoring modes are important when punching in and out of record. Live uses the standard scheme found in most DAWs and in-line mixing consoles. Each track has a Monitor Mode section with the options 'In', 'Auto', and 'Off'. When a track is set to 'In' mode, you will hear the input to a track, whether it's in record or not. In Auto mode, the track will intelligently switch between monitoring the input signal and the audio (or instruments) recorded on the track. If the track is record-armed and playback is stopped, you will hear the input; when playing back, you hear the audio on the track. During recording you hear the input, and if you punch in and out of record (either manually or by setting In and Out points) the track will instantly flip between the two signals. This allows you to hear previous recording passes during a pre-roll, then hear the live input signal while recording.

Another option for recording multiple takes, which can save time while recording but takes longer to pick apart at the editing stage, is to use loop recording. When looping is enabled and you record through the area bounded by the loop brace, Live will record over the loop area repeatedly. All the takes are kept, as the audio is in fact recorded into one long file. When you stop recording, you will inevitably be left with a partial take overlaid on the previous take. Undo, and the last pass will be removed. Successive Undos will strip back each pass. 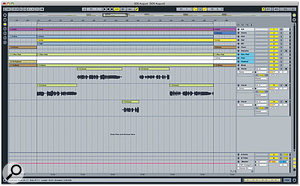 A 'comp' of the best parts of several takes. These regions can now all be collected onto one track. 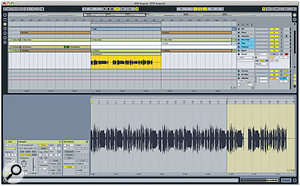 After loop recording, the last pass remains in the Arrangement, but all the other takes appear end-to-end in the same audio file. To switch between takes, you can move the Start and End markers in the Clip view. Comping or choosing from multiple takes is slightly more complicated when you've recorded while looping. If you double-click the recorded Clip to display it in the Clip view (see the screen below), you'll see that the Clip contains all the looped takes in one long file. The portion that is actually being played in the Arrangement will be the last take, indicated by Start and End markers. To hear other takes, simply move these Start and End markers within the Clip, by the length of the loop. Comping from multiple takes requires a little more work in this situation. The best method is to create extra tracks, then duplicate the looped recording on to each track. Then you can use the Start and End markers in each version of the Clip to so that a different take appears in each track. You can then use the same method to make a comp as explained in the previous section.

Despite the fast and flexible recording options available when recording into Live's Arrangement, one missing feature that becomes apparent is crossfades. There is a workaround for crossfading between audio Clips in the Arrangment view, which is to use Clip Envelopes. But for that, you'll have to tune in next time...