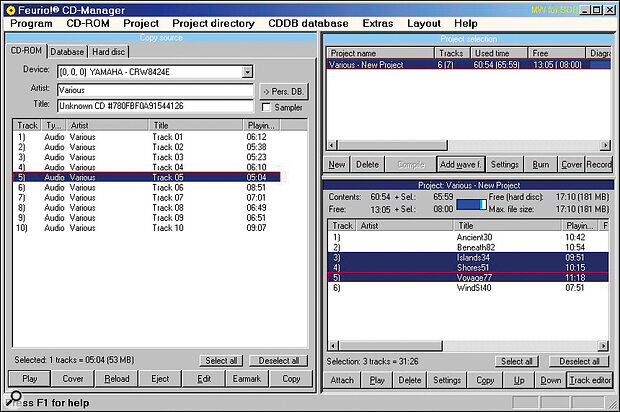 Martin Walker evaluates a program that bridges the gap between the limitations of typical bundled CD‑writing packages and fully fledged audio editors.

I receive quite a few emails from readers who want to burn audio CDs, but who don't like using the entry‑level software that was bundled with their CD‑R drive. These packages often offer little control over the gap lengths between audio tracks, and provide no option to place CD index points partway through long recordings for live albums. Even if you split WAV files into sections, these programs often align separate files with CD sectors before the burn, causing unwanted clicks.

Unfortunately, the alternatives are mostly fully fledged audio editors that offer CD burning as an extra feature, which at several hundred pounds tend to be beyond the reach of many musicians. This is where Feurio! comes into the picture. It's a shareware package now marketed by Ahead, whose Nero CD‑ROM burning software (reviewed in PC Notes August '99) is already widely used by musicians. Nero can burn audio CDs as well as CD‑ROMs, but Feurio! is primarily intended for audio. As such, its features go beyond those of Nero, and include a fully featured Track Editor, plus the ability to split long tracks but maintain their exact relative timing. It also has a powerful CD 'ripper', a very robust CD writer, and can write to multiple drives simultaneously.

However, for many musicians Feurio!'s most popular feature will be its price. The full boxed version that I received costs just £24.99, complete with Ahead's Nero Media Player for encoding and playback of MP3 or TwinVQ files, and a PressIt CD Labeller kit with applicator, half a dozen self‑adhesive labels to get you started, and comprehensive eXPressIT labelling software. You can also download the full version from the Feurio! web site as shareware: registration costs just 25 Euros (£15.80). 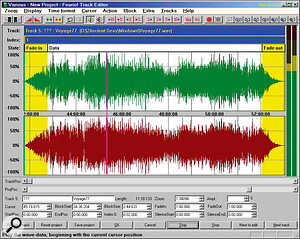 After installation, the first time you run Feurio! or any of the associated utilities you have to enter your serial and licence numbers to remove the nag screen. Then some very useful information appears concerning CD‑ROM and CD‑R drive settings, including advice to disable Auto Insert Notification, and to enable the DMA tick box if you have an IDE CD drive to minimise CPU overhead.

One of the problems faced by many users of CD burning software is that drivers from different manufacturers can conflict with each other, and sometimes the software itself insists on various Windows settings being changed. When Feurio! itself is started for the first time, it checks for various problem drivers on your system, and then offers advice about what to do if it finds any. Clicking on each one in turn provides specific information on its function, and you can deactivate or activate them as well if you feel they may cause problems with Feurio!

The main Feurio! application is CD Manager, which divides the screen into three main resizeable areas (see screenshot above). On the left‑hand side is the Copy Source pane, while on the right‑hand side are two further panes that display where the tracks will be copied; at the top is the Project List (each CD you wish to burn is a new project), and beneath this is the Project Directory, which shows the contents of the currently selected project. The Copy Source pane allows you to grab tracks directly from existing audio CDs, include items from your Database, or take files from your hard disk. There's also a lengthy Device Test function which performs basic checks on your CD drive, to see whether it can digitally extract identical audio data every time, and whether or not it needs software jitter correction for reliable extraction.

The idea of the Database facility is to save you having to type in the name and track titles of your albums before printing suitable CD labels, using either the optional 110Mb of data supplied with the CD‑ROM version, or the much larger Internet‑based database at www.cddb.com. If you already have an MP3 Codec installed on your PC then you can also include MP3 files in your projects, and they will be decompressed on the fly as your CD is burned.

I found the easiest way to get started was to click on the New button on the project list, type in the required Artist and Title information, and then drag audio tracks over to the Project Directory by hand. There's also a Burn button in the Project List pane, allowing you to record tracks from analogue sources such as LPs through your soundcard. Once you have tracks in the Project Directory you can reorder them by dragging them up or down in the list.

You can audition a combination of either audio CD tracks or WAV files by selecting them using the mouse and then clicking on the Play button. CD audio tracks can either be played back in normal analogue mode or digitally extracted and routed through your soundcard in real‑time. You can also launch the Wave Player to audition tracks from the Project Directory window, so that you hear them exactly as you would once burned onto a CD‑R, complete with any inter‑track pauses and fades.

Once you have tracks in your Project Directory, you can open the Track Editor, which provides a wide selection of audio options, including the removal of silence at the beginning and ends of tracks, and the addition of fade‑ins and fade‑outs. For tracks with extraneous data at either end, the start and end points can be adjusted so that you burn only the required segment. The main part of the window is used for a freely zoomable, scrolling Wave Area to display the audio waveforms; you can view your stereo tracks either as twin channels one above the other, or as larger superimposed waveforms.

You can change the Amplitude in percent to make a particular track fit better with others, or use the Adjust Amplitude function for the current track or the entire project. This not only scans the audio files for peak amplitude, but also calculates the levels after excluding various percentages of the highest peak values, to give you a better idea of their average loudness level. You can then either normalise all tracks to the maximum possible peak value, or choose one of the percentage values to equalise the tracks more by their average level. These features may be particularly useful to those compiling MP3 files downloaded from the Internet, which can vary greatly in level.

You can Link tracks in a variety of ways from either the Project Directory or the Track Editor, and once linked their timing will remain locked together. Conversely you can Split tracks, either 'not linked' with a pause inserted between the two sections, or 'linked' — the ideal solution for live recordings when one long recording has been made.

Going For The Burn

Once your Project is complete, clicking on the Burn button launches the CD Writer application; you can also use this by itself to copy CDs, either 'on the fly' if you have both CD‑ROM and CD‑R drives, or via an image file if not. Like the other components in the Feurio! package, CD Writer is certainly comprehensive, and like Nero! it can overburn CDs so that you can squeeze 78 minutes of recording onto a 74 minute blank. It even shows the playing time and manufacturer of each CD‑R blank!

However, for many musicians CD Writer's most important feature will be its very low CPU overhead and robustness, even under stress. I didn't produce a single dud disc during the review period, and Feurio!'s multi‑tasking lets you burn a CD‑R while reading another CD‑ROM. If you have multiple CD‑ROM drives you can read multiple discs simultaneously, and with multiple CD‑R drives you can even write multiple blanks simultaneously, although Windows NT and a fast hard drive are recommended for this.

Feurio! also includes a graphic editor identical to the one included with Nero, which lets you design cover, tray, and on‑body artwork. This is easy to use, but rather limited; however, this scarcely matters for those buying the boxed CD‑ROM version, since the bundled eXPressIT labelling software is far more comprehensive.

There's a huge amount on offer here, and at £24.99 it perhaps seems churlish to grumble at all, but using Feurio! would be even easier if a few things were tidied up. The help file is extremely comprehensive, with a huge amount of useful background technical information, but does confusingly keep referring to functions with different names to those that appear on screen. For instance, the Save Project button is called Secure Parameters in the help file, while all the Block functions are described as Areas. I also get the impression that the author uses a 1280 by 1024 pixel screen display, since a couple of icons disappear off the end of the Track Editor toolbar in 1024 by 768 resolution unless you float it.

However, Feurio! is still an extremely comprehensive application, and does almost everything that a musician might want from an audio CD burning application. The only thing I miss is the ability to crossfade two tracks as you can in both CD Architect and Wavelab, although I doubt that this omission will worry the majority of users. Although the graphics aren't quite as slick as those of such professional CD burning and audio editing applications, Feurio! is a fraction of their price, and seems perfect for any musician on a budget.

Feurio! runs happily on Windows 95, 98, ME, NT 4.0 and 2000. It has extremely modest requirements, and any processor from a 90MHz Pentium upwards should be quite sufficient, along with 32Mb of RAM. You will, of course, require a CD‑R drive, and a huge range of different makes and models is supported (see the web site for the latest list).

Feurio! contains an amazing number of features for anyone on a tight budget who wants to burn audio CDs.