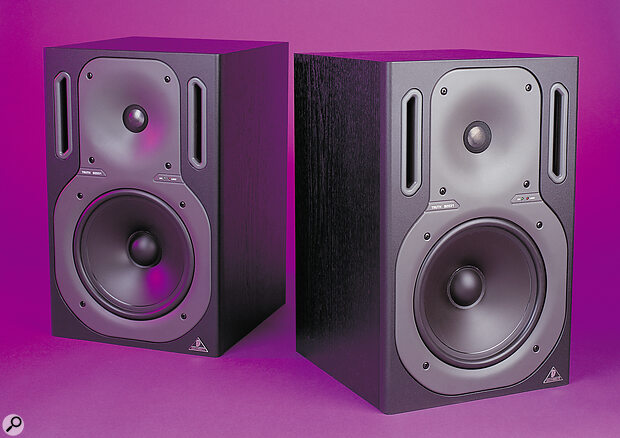 It seems a very long time since Behringer first announced their intention to get into the active monitor market, but the two‑way active Truth B2031s have finally arrived. Though their cabinet design might bear a passing resemblance to other monitors in the marketplace, the design is mainly very conventional and is based upon well‑established principles.

These monitors combine 8.75‑inch, polycarbonate bass/mid drivers with one‑inch, titanium‑dome tweeters. Both drivers are magnetically shielded (via compensating magnets) which is useful when you have to mount the speakers very close to a computer monitor, though I've rarely had trouble with unscreened monitors in practice, providing they are kept at least six inches away from computer screens.

An aluminium basket supports the woofer cone, which has a voice‑coil diameter of around 1.5 inches, with a shallow waveguide‑style tweeter baffle (similar to that used by Genelec and Mackie) assists in matching the directivity of the two drivers at the crossover point.

A fourth‑order crossover set at 2kHz splits the signal prior to the amplifiers, with 150 Watts of amplification available for the lower band and 75 Watts for the higher band. Like most monitors of this size, the cabinet is ported, though slit‑shaped ports have been used, rather than the more conventional round tube — the designers claim these have been designed to minimise wind noise at high SPLs, and I certainly didn't notice any. The MDF cabinets are finished in a black woodgrain foil and have slightly radiused front edges. They measure 400 x 250 x 290mm and weigh approximately 15kg each. A layer of damping material is applied to all internal surfaces and the structure is well‑braced.

The amplifiers are housed in sturdy metal enclosures at the rear of the cabinet, and you have the option of feeding them from servo‑balanced jack or balanced XLR inputs, whose sensitivity is controlled from a rear‑panel knob. Power is via an IEC socket with accompanying switch, but these are deeply recessed at the bottom edge of the amp pack and are quite difficult to access. A rear‑panel slide switch selects one of three power modes: On, Off or Auto. In Auto mode, the speakers wake up whenever they receive a signal and shut down within a few minutes of not being used. The Off mode can be used as a power switch, though the manual recommends that the speakers be turned off at the mains switch when they are not going to be used for a long period. When the speaker is switched on, a green LED shows on the front panel, while a further red LED warns when an overload protection limiter is operating. Not that you'll necessarily notice this last feature — I found that my ears limited before the speaker did! 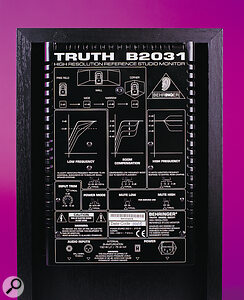 The B2031s are specified as having a robust maximum output SPL of 116dB per pair at one metre, and are claimed to have a frequency response of 50Hz to 21kHz — but, as no levels are specified and as no print out of the actual response curve is provided, these figures mean very little. A number of slide switches provide frequency‑response tweaks. for various different situations. For rooms that behave badly at low frequencies, or for situations in which a separate subwoofer is being used, a four‑way switch provides a choice of bass roll‑off frequencies: 50Hz, 65Hz, 80Hz and 100Hz. If mounting the speakers close to a corner is unavoidable, there's also a switch to cut the bass level by 2dB, 4dB or 6dB. Finally, because different users like to hear different amounts of top end, the high frequency level may be boosted by 2dB, or cut by either 2dB or 4dB.

All the rear‑panel switches are clearly labelled with a sentence or two of accompanying description, though the manual provides more in‑depth practical advice on setting these switches to match the listening environment — albeit with some dubious advice suggesting that a Behringer Ultracurve might be used to analyse and compensate for room problems. (As is now largely agreed upon, it is simply not possible to cure time‑domain room problems by making adjustments in the frequency domain.) In all cases, the 'typical' switch settings are marked via a small triangle. Finally, a further pair of switches allow the two drivers to be independently muted, ostensibly for servicing purposes.

The manual correctly states that the monitors should be used upright for the best results, but suggests that they are used 'tweeters out' if they have to be used on their sides. As the tweeter is some distance from the centre of the bass/mid driver, I would be reluctant to use them in this way as the resultant sweet spot would be very narrow.

With all the switches set to their normal positions and with my usual selection of test material, these speakers behaved pretty well, but sounded just a hint 'splashy' at the very top end. This is a characteristic that I've always found to be inseparable from the use of uncoated titanium tweeters, and though titanium behaves well up the limits of human hearing, it has a tendency to 'ring' at higher frequencies causing modulation products that can 'fold back' into the audible spectrum. All loudspeaker design is a compromise, and in favour of titanium is its ability to deliver true pistonic action at high SPL levels. Switching the tweeters to their ‑2dB setting produced a more balanced result to my ears (at least in my listening room), though the speakers still had a noticeably 'forward' character. However, in general, voices sounded natural and open with any edginess confined to cymbals and other specifically high‑frequency sounds.

At the bass end, these speakers deliver a weighty punch for their size, and going on their response to my range of test material, I'd guess this impression is due in part to a slight tendency for low frequencies to 'overhang' due to the combined resonance of the driver and cabinet porting. Again, this is not so exaggerated as to be a problem, but I suspect that if the same driver were used in an optimally damped design, the bass end wouldn't sound quite so dramatic. Otherwise, the sound is loud, clear and detailed, with decent stereo imaging.

Behringer claim these monitors have been built to be as accurate as possible, though my feeling is that both the high end and low end are slightly larger than life, giving the monitors an immediately impressive 'big' sound that could end up getting a little wearing after protracted high‑level listening. However, I know a lot of musicians associate this 'more of everything' character with a 'proper' studio monitor sound, and certainly the Truths are accurate enough that there would be no problem getting used to them. Dropping the tweeter level helped significantly and the manual wisely points out that you should get familiar with the sound of commercial recordings played over them before you embark on any serious mixing. Provided that you do this, I can't foresee any real problems.

As to who should consider these speakers, my feeling is that anyone wanting a loud, clear monitor with plenty of bass extension, at a sensible UK price, wouldn't be disappointed. They probably work best for pop and dance music where they provide a good compromise between true neutrality and an exciting playback experience.

The B2031 Truth monitors offer a good balance of bass extension, overall level and general clarity, making them a viable and affordable studio monitor.