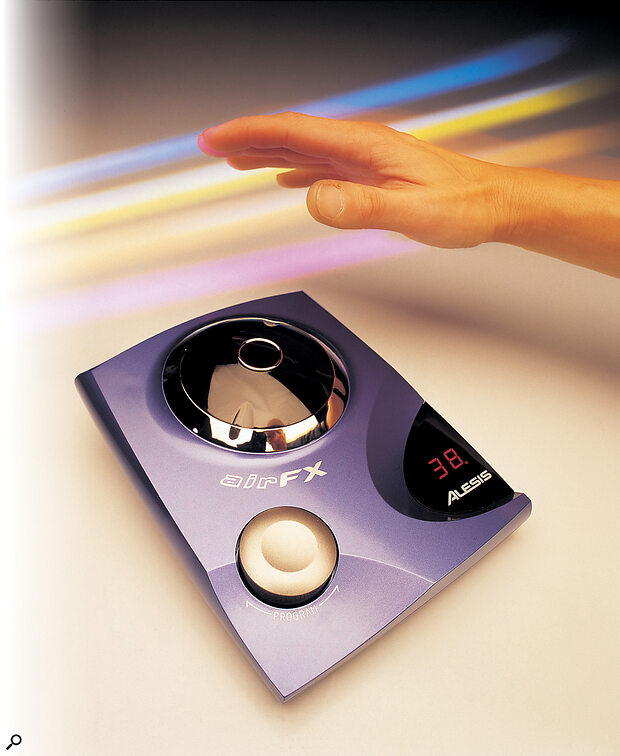 As is instantly obvious from the photograph, the Alesis Air FX is an effects box with a difference, but, despite its obvious consumer leanings, inside that futuristic blue exterior lies a 24‑bit, 44.1kHz effects processor with a signal‑to‑noise ratio of better than 102dB. This translates into a 20Hz‑to‑20kHz bandwidth with noise and distortion specs to rival many high‑end studio processors. What is less professional is the provision of unbalanced phono inputs and outputs operating at ‑10dBu, but then the Air FX is designed to appeal not only to the project studio owner, but also to jobbing DJs, as well as to people who just want to patch it between their CD player and their hi‑fi amp, so perhaps this was a wise move by Alesis. Phono leads are provided as part of the kit.

Housed in a moulded plastic case little bigger than a portable CD player, the Air FX is powered from an included AC adaptor. The only other connections are the stereo audio inputs and outputs — there are no MIDI sockets at all. There is a manual, but the essential operating instructions are also printed on the bottom of the unit — just to give you an idea of how simple it is to use. A threaded socket in the bottom of the case allows the Air FX to be mounted on a mic stand for live or studio use.

At the front left of the unit is a rotary control used to select from the 50 onboard effects programs — pushing the control down loads the currently selected program number. The two‑digit plasma readout shows which effect is selected, and a decimal point appears after the patch number if the patch hasn't yet been loaded.

The most strikingly obvious feature of the Air FX is the translucent perspex dome that looks disturbingly like the eye of the HAL computer in the film 2001, and that's what sets the Air FX apart from conventional effects units. Inside the dome is an infrared source plus an array of sensors that detect movement above the dome in the X, Y and Z axes. This allows the machine to detect how a hand waved over it is moving — whether side to side (X axis), forwards and backwards (Y axis), or closer and further away (Z axis). The information thus attained is then translated into real‑time control parameters for the chosen effect. Some of the effects require only one or two control axes, but most respond to all three.

The rotary control has a second function, in relation to the motion sensors — if, while waving your hand over the sensor, you find a particular effect setting that you like, then you can 'freeze' this setting by pressing and holding the rotary control for around one second. A second decimal point in the display shows when the freeze mode is active. This function is particularly useful given that there is no dedicated bypass button on the unit — the Z axis sensors will usually control the wet/dry mix of the effect, so moving your hands away from these sensors and then engaging freeze mode will allow you to achieve much the same result as a bypass button if need be. In terms of operation, that's pretty much all there is to it — it's the effects themselves that are the real stars of this show, particularly because of the way the user can dynamically interact with them.

There's Something In The Air 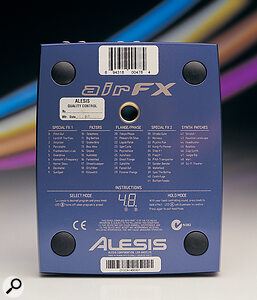 The underside of the Air FX features complete operating instructions and a threaded socket for mounting the unit on a mic stand.

The first section of effects, 00 to 09, are special effects of which number 00 is a fairly representative example: this slows down the music as you bring your hand nearer to the sensor, until the music finally grinds to a halt. When you move your hand away, it starts up again. Of course, there's some trickery taking place so that, when the music resumes at normal speed, it's still in sync with the input signal — not delayed by the amount of time you halted it.

Also in this section are demonic tone generators, sample‑and‑hold random tones that mix with your music, and a 'Vinylizer' that adds pretty authentic vinyl‑style scratches to the material being processed. Add a few diabolical distorters, some creepy modulators and some obscure filtering and you'll begin to have an idea of what this section is about.

Next along the list is a selection of 10 filters, ranging from something that progressively high‑pass filters the music until it sounds like it's being played down the phone, via more conventional high‑pass and low‑pass resonant filtering and vowel formants, all the way to filters that follow the envelope of the music while interacting with your hand movements. Some of these filters sound really effective, particularly the formant filter, which sounds rather like a guitarist's talk‑box. If you're into dance, trance or just plain weirdness, the filter section is likely to provide you with a lot of fun.

The third set of effects cover phasing and flanging, and unlike the pedal or rack varieties that run from an LFO, the sweep can be controlled by hand in a way very similar to genuine tape flanging. Many of these patches are pure psychedelia and there's plenty of variation, from a subtle phase that just tickles the edge of consciousness to a deep flange that threatens to turn your head inside out.

More special effects follow, the most notable being Strobe Gate, that chops up the music in time with the rhythm, and Kung‑Fu Panner, that does precisely what you'd expect. Hidden amongst this collection are pitch‑shifters, gender changers and rotary speaker emulations, all of which sound so much more organic than their rack counterparts because of the real‑time control.

Last come 10 synth‑style effects, though the first of these is a surprisingly realistic record scratch, which I would have said belonged in one of the special effects sections. This recreates DJ‑style scratching — and it saves wear on 'gramophones' that weren't ever designed for that kind of abuse. There are some weird drum and percussion sounds in this section, as well as a couple of synth sounds that can be controlled in theremin style by varying your hand position relative to the sensors.

Over The Air Waves

The only connections on the Air FX are those for the stereo unbalanced I/O and for the feed from the included AC power adaptor.

The only major point to be made against the Air FX is that there's no way to meter the input level, so optimising the gain structure is a bit of a hit and miss unfair. I know the unit is supposed to be simple, but a single clip LED would have helped enormously.

Because there's no MIDI, everything you do with the Air FX has to be in real time, so if you want to use it in a mix then you have to just record the output. While some might find that frustrating, the simplicity of this unit is also its strength. Because there's nothing technical to learn, all you need to do is get used to the relationship between the effects and the hand movements. In a very short space of time, it's possible to coax both subtle and blindingly obvious effects out of this little box. What's more, there's no noticeable latency when processing signals via the unit, which is extraordinary given the nature of some of the real‑time delay effects.

I found the filtering and flanging effects most useful, though those people who are into more experimental sound design will no doubt find a use for the more radical treatments. The degree of control that can be imposed on filter and flange sweeps is remarkable, and I found it easy to get very close to the effect of manual tape flanging.

Air FX is rather an oddball product from the company that brought us affordable digital reverb and the first low‑cost digital tape recorder, but I have a feeling that it's going to be hugely successful because it can appeal to so many potential users. Of course, the concept of direct effect interaction with the user isn't a new one — the Korg Kaoss Pad got there first — but Alesis have gone further in simplifying the idea, yet without forgetting to include some stunning effects. They've also hit the sub‑£200 price point, making it a possible impulse purchase for many people. It's my guess that anyone coming across one of these units, all set up and ready to play with in a music store, will find it very hard to resist taking it home with them. And yes, dammit, I'm buying one!

A marvellously simple concept that makes real‑time effects processing a lot of fun.