In previous issues, I've often mentioned the Alesis M1 Active MkII monitor as a good, budget-conscious solution for home studio monitoring. Now there are two new sets in the range, the M1 Active 620 and M1 Active 520, which are meant to sit alongside the M1 MkII, rather than replacing it. The new models certainly look very different to the M1 Active MkII, with their computer-style power switches on top of the cabinet and their blue illuminated power indicators. At heart, however, they are based on the proven engineering principles of a ported two-way active system, in this case with the port at the rear of the cabinet. 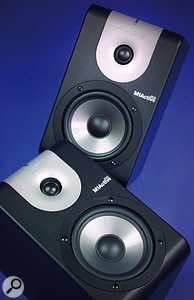 The cabinets are solidly built, with one-inch-thick front baffles. An attractive black textured coating is laminated onto the surface of the box and the cabinet's front edges are radiused to reduce diffraction and to improve their appearance. Both the woofer and the tweeter waveguides are recessed flush with the front baffle and fixed with cross-head screws. The smaller M1 Active 520 utilises a 75W amplifier, while the 620 has a 100W amplifier, and both models are magnetically shielded for use near CRT video monitors.

Measuring 165 x 267 x 197 mm (WxHxD), the compact M1 Active 520 weighs 6kg. Alesis give its frequency range as 56Hz to 20kHz, but as no reference level is given for these measurements (-3dB is the usual reference), this isn't hugely informative, and neither is a maximum SPL figure supplied. The one-inch, silk-dome tweeter receives 25W of power, while the five-inch woofer (a light but stiff polypropylene cone set into a rubber surround) receives 50W. The crossover frequency is set at 2.8kHz.

Weighing 9.6kg, the M1 Active 620 is somewhat larger than the 520, at 216 x 380 x 260 mm (WxHxD) and has an extended low-frequency response, reaching from 20kHz down to 49Hz. It uses the same driver construction at its smaller sibling, but with a 6.5-inch woofer accompanying the one-inch tweeter.

Both models feature balanced XLR and TRS jack inputs and have an input-gain control and four slide switches, labelled Acoustic Space, Hi Boost, Mid Boost and Lo. Hi Boost operates a shelving filter with a turnover frequency of 3kHz and offers 2dB of cut or boost, as well as having a flat 'off' position. Mid Boost switches a 2.5dB wide-band boost at 1.8kHz on or off. The Lo switch sets the built-in high-pass filter's roll-off frequency at either 56Hz, 80Hz or 100Hz. The Acoustic Space switch compensates for the build-up of bass frequencies that occurs when the speakers are used close to walls or to corners: there are free-space, half-space and quarter-space settings, which introduce an appropriate amount of bass cut. One final feature worth mentioning is that the monitors' blue power lights flash red to warn of clipping. 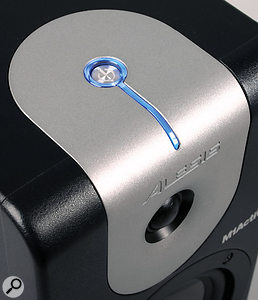 When the input is overloaded, the speakers' power lights flash red, instead of blue.In my studio, the larger 620 monitors came across as detailed and smooth, with exceptionally good stereo imaging and plenty of low end. However, I felt the low end had a slightly plummy coloration that tended to make the bass sound just a bit more warm and round than normal. This characteristic is noticeable in many small to medium-sized studio monitors and is probably down to the port tuning artificially bolstering up low bass notes and kick drums before the response falls away at the lower cutoff point. It's not a problem, providing you get used to the speakers in situ, using good reference recordings that you know well. However, my own preference is for more sonic honesty in this area.

I preferred the 620s with the Hi and Lo Boost switched off, the high-pass filter at its lowest setting and the Acoustic Space switch set to its centre position. I had the speakers around 35cm away from the wall and well away from corners for these tests, and overall I found the sound revealing, with a satisfying low end. There's also a decent sense of front-to-back perspective, although not as much as you'd get from a really high-end monitor.

Switching to the smaller 520s revealed a broadly similar tonal character, but with a little less bass extension and seemingly a little less available level. Even so, the bass end is very credible and would perfectly suit many smaller home-studio spaces. If you crank up the level until the LED strips start flashing red on peaks, the subjective level is somewhat higher than I'd want to monitor at for any length of time. If you back off the level a touch, to stop the peak lights flashing, the sound is still clean and the bass is still under control.

I've always thought Alesis monitors offered a good compromise between quality and affordability and these new models seem to follow in that tradition. Although purists could no doubt pick holes in some aspects of their performance, they are very easy to mix on and are revealing enough to highlight any problems in your sound sources. Both models have more bass extension than you might expect, and while I suspect that this isn't clinically accurate, it works well enough in most small to medium-sized rooms, providing you 'learn' the speakers using known reference material. Within their price range, the M1 Active 620s are hard to beat, although they have one or two worthy opponents, not least Alesis' own M1 Active MkIIs. The smaller 520s are a great choice for studios set up in smaller spaces or where desktop monitors are required, and even though they look slightly on the diminutive side, their performance is anything but. To sum up, both models are well worth investigating if you're looking for an effective active monitor at the lower end of the price range.

There are lots of powered monitors to choose from at a similar price to the 520 and 620. Alesis' own M1 Active MkII is a possible alternative to the 620, and other choices include the Fostex PM1, the KRK Rokit range and the Tannoy Reveal 5A and 6D. Other alternatives include the Tapco S5 and S8 and the Event TR6 and TR8.

While it is impossible to make a technically perfect monitor at any price, let alone at this end of the market, Alesis have again managed to find the best compromise, to deliver affordable monitors capable of great mix results.