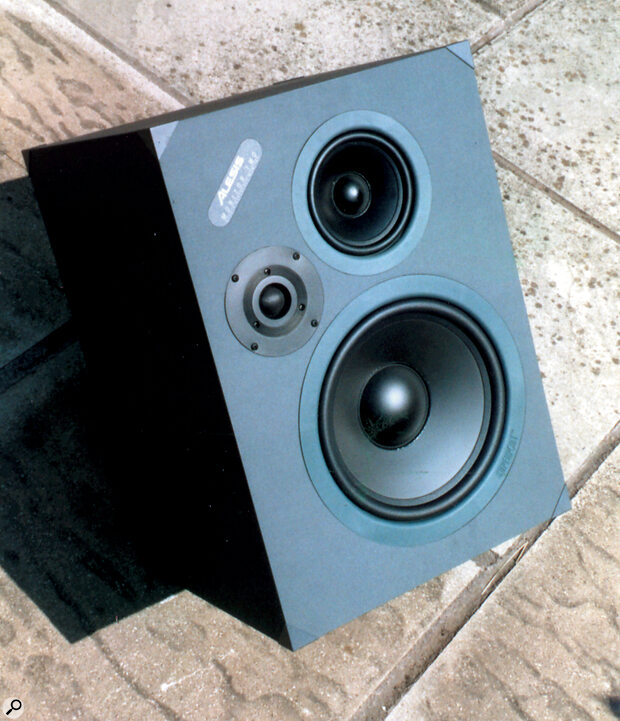 Paul White subjects his studio to yet more upheaval as the monitors are changed yet again, all in the cause of research.

When it was first announced that Alesis were producing the Monitor One nearfield monitor, there was no shortage of people asking what an earth they were up to — after all, why should a company with a history built on effects units and digital recorders suddenly start messing about with loudspeakers? Loudspeaker design seems to demand both engineering expertise and more than a modicum of inspired intuition, but what the doubters didn't know was that Alesis had taken on the services of a loudspeaker design team with a view to setting up a live sound division. The Monitor One was really a toe‑in‑the‑water test of their design and manufacturing capability, and the end product was an affordable, great‑sounding nearfield monitor.

A couple of trade shows back, I sneaked a preview of the Monitor Twos, a pair of full‑range monitors which were then still under development. Finally, the production Monitor Twos have landed in the UK, only to fall straight into my expectant clutches for review.

The Monitor One is a two‑way nearfield design, and it appears that the same design principles and concepts have been extended to the Monitor Two's 3‑way, full‑range design.

Measuring a chunky 355 x 355 x 510mm, the cabinets, which are built as a mirrored pair, are once again fabricated from what appears to be MDF covered in a thin, slightly rubbery grey veneer. The cabinet corners are protected by simple corner mouldings, and as with the Monitor Ones, the drivers are recessed, so as to be flush with the front baffle. The bass and mid drivers have radiused rubber surrounds which cover the speaker rim, and provide a smooth acoustic transition between the cone and the cabinet.

Connection to the cabinets is via conventional screw terminals, which also accept standard banana plugs.

Life must be very difficult for loudspeaker designers, because they're all faced with the same set of design parameters, and all designs involve some sort of compromise. In one direction, you can go all out for acoustic efficiency, but high‑efficiency designs can suffer resonance problems, making them sound more coloured than their less efficient counterparts. At the other end of the scale, you have the ATC approach, where immensely expensive engineering combined with highly damped materials produces an extremely accurate, uncoloured sound, but apart from the high cost of the speakers, you also need plenty of amplifier power to drive them.

Most studio monitors take the middle ground, offering reasonable efficiency combined with a sound that's as accurate as possible, especially in the mid‑range, where most of the critical audio detail resides.

At the treble end, Alesis have chosen to go with a soft‑dome tweeter, and from my experience, it's always been the monitors with soft‑dome tweeters that have the sweetest sound. In the case of the Monitor Twos, the tweeter uses a 1‑inch diameter, treated silk dome diaphragm driven by a ferrofluid‑cooled magnetic system, and, as far as I can see, it's the same tweeter as used in the Monitor Ones.

Handling the mid‑range is a 5‑inch cone driver based around a mineral‑filled polypropylene cone in a soft rubber roll surround. This driver appears to be very highly damped, which would help account for the crisp mid‑range and pinpoint accurate stereo imaging — on recordings made with RSS or Q Sound 3D processing, you really can pick out those 'off‑stage' sounds as well as those hanging between the speakers. Because the mid‑range driver only handles frequencies between 1.5kHz and 6kHz, it has a relatively stress‑free life, and avoids the high cone excursions that the bass/mid drivers in two‑way systems are subjected to.

At The Deep End

At the bass end is a substantial 10‑inch driver using the same mineral‑filled polypropylene cone construction as the mid driver, and powered by a three‑inch voice coil. This is loaded by a ported cabinet, and as with the Monitor One, the port is rear‑facing. Another feature carried over from the Monitor One is the Superport technology, which involves using a large‑diameter, folded pipe to avoid port turbulence and to maintain consistent port loading at high sound levels. With narrow, short ports, turbulence can change the effective port size at high sound levels, so that the loading on the speaker changes.

The result of all this advanced design is that the Monitor Twos can reproduce frequencies from 40Hz to 18kHz, yet they're efficient enough at 90dB/Watt@1m to sound good with amplifers rated from around 75 Watts per channel up to the rated maximum of 200 Watts (peak). I have heard these monitors running with an Alesis Matica amplifier, and they sound really tight. For my own tests at home, I used my venerable Yamaha 2075, and although the results were still excellent, there was a trace of ragginess that using a better and more powerful amplifier would have overcome. There is a moral here — don't simply assume that one power amplifier is much like another! It pays to spend a bit extra on something that's going to do the job properly.

One of the benefits of a three‑way design is that each driver can concentrate on getting its own part of the audio spectrum right, and in the case of the Monitor Twos, that results in a deep, well‑controlled bass end that hasn't been tuned to hell just to make it sound impressive. Instead, you get a bass you can really feel, but it doesn't overpower or get in the way of mid‑range detail.

The mid‑range and high‑frequency drivers blend seamlessly, and another advantage of the three‑way design is that the upper crossover frequency is kept well away from the vital speech area of the frequency spectrum. The outcome is a highly detailed sound, and the tonality is also very smooth, which means that you can listen for long periods without having to reach for the aspirin.

No loudspeaker system ever built has been perfect, regardless of price, and in a direct shoot‑out, the Monitor Twos do fall short of the standards set by the likes of ATC and Genelec — they exhibit a slight clouding of fine detail in the mid‑range combined with a hint of plumminess in the bass — but then it's a testament to the quality of the Monitor Twos that they even stand comparison with such top‑end products. Putting their performance into perspective with their price and physical size, I have to reach the same conclusion as I did with the Monitor Ones, which is that Alesis have once again come up with what is probably the best monitor loudspeaker in its price bracket.

Until now, it's been quite difficult to recommend anything serious for under £800 or so, and for those prepared to do the work, I still think the Home Studio Monitor kit from Wilmslow Audio (reviewed in SOS July 1993) takes a lot of beating, but when it comes to ready‑built speakers, I can't really point to anything that wins out over the Monitor Twos for the price. The overall tonal balance of the Twos is good, and the bass extension is better than you'd expect from speakers which are still relatively small as full‑range models go. The tonality also manages to get the detail across without sounding peaky or strident.

The final word is that if the Alesis Monitor Twos happen to fit your budget, and you want a full‑range monitor system as opposed to a good pair of nearfields, don't buy anything else until you have compared them with these.

If there was a 'best in their class' award for monitors, these would definitely make it to the finals.

Field Music: Building A Track In The Studio
3 weeks 3 days ago.