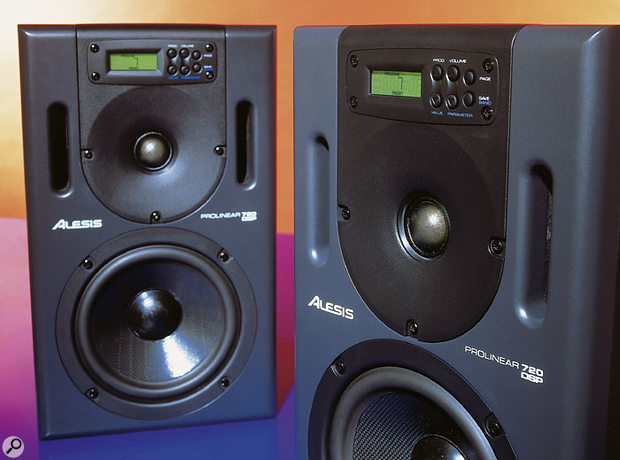 These active monitors can have their responses tailored to suit their environment when used with the powerful four-band DSP equaliser option.

Speakers with built-in DSP functions are likely to become increasingly popular, not only because it means the speakers can have their responses tailored to suit their environment, but also because it provides a means to control multiple speakers at the same time — an essential factor in surround monitoring. DSP speakers can include EQ and time delay to compensate for positioning relative to their ideal positions, but in the case of the Alesis Prolinears, the designers have decided to confine their DSP activities to level control and four-band parametric EQ. Judging by the factory presets, the EQ is used mainly to emulate other speakers, either ones of limited quality or ones with specific frequency characteristics. However, if you know what you are doing, you can also use the DSP to help compensate for speaker placement too close to a wall or corner. The sample rate of the converters is 48kHz, so they won't tell you much if you choose to mix at 96kHz or 192kHz, but for real-world project studio applications they're fine.

The Prolinear DSPs are available in two sizes, one with an eight-inch bass/mid-range driver and the other with a seven-inch unit. Additionally, both models are available in versions without the built-in DSP. The seven-inch DSP version reviewed here has the drivers mounted symmetrically on the baffle and measures 12 x 9 x 15 inches, with dual bass ports located either side of the tweeter. The one-inch tweeter sits in a contoured waveguide, and is driven from its own 40W amplifier, while the seven-inch bass/mid-range unit is powered by an 80W amplifier. Both can handle peaks of 130W before clipping, but no mention is made of the crossover frequency or any other aspects of the driver construction. The maximum SPL of a pair of these monitors at one metre is 110dB.

In most respects the monitors look pretty conventional, and are built into nicely finished cabinets with rounded baffle corners. The drivers are recessed into the baffle (the cabinet seems to be made from MDF, but again no firm details are supplied) and the DSP control panel sits above the tweeter. This features a green backlit display that turns red when the speakers are being overdriven to the point of clipping. A setup mode is included for calibrating the rear-panel trim for optimal gain structure, though this requires the user to provide a steady-state test tone or noise signal.

On the rear panel, which is also the heat sink for the power amplifiers, is an IEC mains inlet and power switch, a balanced combi jack/XLR input connector and a level adjustment knob. There are also two nine-pin D-Sub connectors, one of which can be used to daisy-chain to the next speaker in the system, allowing multiple speakers to be controlled from the first speaker's DSP control panel or computer input. A channel system similar to that used in the MIDI protocol allows multiple speakers to be connected and controlled either together or as groups. All speakers on the same channel will be controlled together.

The other nine-pin D-Sub allows a PC to be connected, where included software makes it possible to edit the EQ and gain settings on screen, while viewing a display of the actual EQ curves. Setups may be stored as user presets in the speakers themselves (there are eight factory settings, the first of which is flat) and data may also be backed up in the computer.

The control panel has, in addition to the small LCD window, six small buttons, two of which step up and down through the eight factory presets and eight user presets. The remaining buttons allow the gain trim and EQ parameters to be adjusted and the edits saved. All the EQ adjustments can be made from here, but without the benefit of a curve display. The gain may be trimmed in the DSP control panel over a -18dB to +17dB range in 0.1dB steps. All four frequency bands can be set from 20Hz to 20kHz with a +6/-12dB gain range, and Q can be varied from four octaves down to a tight quarter octave.

Installation of the v1.0 software on my trusty old Windows 98SE-equipped laptop was fast and trouble free from the supplied CD-ROM. The laptop (or desktop PC) then connects via a serial port and the supplied RS232 cable to one of the DSP speakers, communicating with the other speakers as necessary through serial leads joining them all together. 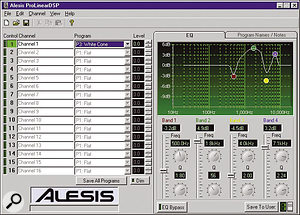 With the software up and running, the main control screen lists the recognised speaker control channels in the left-hand column, along with the factory or user program and the speaker level. The right-hand side shows the nominal frequency-response curve, along with the four-band parametric equaliser controls below.

The operation of the software is very simple and intuitive. The required channel is highlighted, and the preset DSP program selected from the drop-down list. The corresponding speakers immediately load the appropriate DSP EQ settings — job done!

Alternatively, the equaliser controls can be manipulated manually, either by dragging the control nodes around on the frequency response chart, or by adjusting the virtual sliders and knobs in the on-screen control panel, or by typing appropriate numbers directly into the data displays. Adjusting the Q values below 0.25 accesses three alternative EQ types — high shelf, low shelf, and high-pass filter — and all four EQ bands can be tuned over the full 20Hz-20kHz range.

With a bespoke EQ curve designed, it can be saved as one of the user programs to enable it to be recalled later, if required. Although only eight programs are available in the drop-down list, individual programs can be saved as files on the computer's hard disk, and recalled whenever required. A second tabbed page behind the EQ page enables new programs to be named and any relevant notes or explanations to be added. Furthermore, multiple sets of programs and channel settings can be stored and recalled as Workspaces, enabling customised sets of EQ parameters and channel groups to be designed, saved, recalled and downloaded as required.

The system works very well, and is entirely intuitive to operate, and although the resolution of the frequency response chart on screen doesn't look too promising, the EQ parameters can actually be adjusted with reasonable precision and in real time. Hugh Robjohns 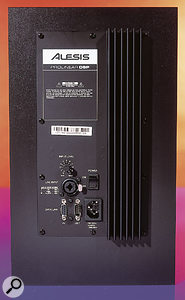 The rear panel of each speaker not only carries the combi jack/XLR audio connection and level control, but also the two nine-pin D-Sub connectors which allow you to connect your system up to a PC running the included editing software.Photo: Mark EwingThe only 'accurate' sound in these speakers is the first preset, which is set to be as flat as possible, and in my control room it sounded pretty much right. The speakers have a decent degree of bass extension (50Hz-20kHz is the quoted figure ±1.5dB), while remaining tight and well controlled. The mid-range was also open and detailed, while the high end was smooth and open, due in part to the use of soft-dome tweeters. Overall the stereo imaging was very good, and the mix was presented with depth as well as width —something you don't always get in this price range. The other presets are caricatures of other well-known speakers, and were actually more subtle than I expected. However, while these are fine for second-checking mixes, I wouldn't actually mix using any of them. They can only be approximations, because there's much more to the way a speaker sounds than its frequency response — something that the manual has the good grace to point out.

This brings up the question of what the user is expected to program into the user memories. Without expensive test equipment and expertise, it's impossible to make meaningful room compensation adjustments, and even then these tend only to affect the bass roll-off to compensate for room boundary effects. In fact I thought it was rather remiss of Alesis not to build in presets for the usual whole-space, half-space and quarter-space monitoring environments, as these are arguably far more useful than simulations of things like ghettoblasters and AM radios.

Material with a heavy bass content can cause the clip indicators to flash at what some people might consider to be modest listening levels, but in reality the speakers are adequately loud for nearfield use, as prolonged exposure to high sound levels is not only potentially dangerous to your hearing, but also distorts your short-term listening perspective, leading to unreliable mixes.

While clearly built to a price, the Prolinears are good-sounding speakers that tell you what you need to know about a mix, but if (like me) you feel you can only trust them in the flat position, I suggest you choose the lower-cost, non-DSP version. As I pointed out earlier, I think Alesis have missed out by not building in some standard environmental correction presets, as, in my experience, most users will make their monitoring environments far, far worse if they try to make any EQ adjustments on a purely subjective basis.

Where DSP-linked speakers really come into their own is for surround work, where it should be possible to control the level of all the speakers in a system from one place. Ideally this would be an infrared remote control, but Alesis haven't included this feature. However, you can set the EQ and trim levels of all speakers simultaneously from the main speaker's DSP panel, or from a computer.

As you may have gathered, I have some reservations about the benefits of DSP monitor equalisation in the hands of musicians who, in the main (and I include myself here!), don't have the test equipment or technical expertise to use it effectively when trying to compensate for room placement or other environmental factors. However, if you select the flat position and treat them as 'normal' monitors, the Alesis Prolinear DSPs compare well with anything in the same price range and are able to provide adequately accurate nearfield and midfield monitoring in a typical project-studio environment. Of course if you're going to do that, you may as well save money and buy the non-DSP version instead.

Similarly, if you want to work at higher sample rates, the non-DSP 720 or 820 version is better suited, as there are no converters to limit the bandwidth of the signal. They sounded comfortable from the moment I powered them up and, despite their detailed, revealing sound, they weren't harsh or aggressive — I could have mixed on these all day.

Even without the DSP, these are good speakers at the price. If you have applications for their DSP capabilities, so much the better, although it's easy to make your monitoring less accurate rather than better unless you know exactly what you are doing.