Reunited with the much‑loved Alice brand after many years, has Ted Fletcher managed to breathe new life into this classic compact mixer?

Like most music producers under 40, I started out using software, but, thanks to studio visits and magazines like SOS, I came to realise that hardware was very much still ‘a thing’, and over the years have built up quite a collection. It includes a few interesting pieces by British designer Ted Fletcher, and two of the most interesting are a custom (or perhaps prototype) Alice 828 MkII desk and an Alice outside broadcast mixer, used in BBC radio trucks a long way back. So when I was told that the Alice name had found its way back to Ted, through a new collaboration, and that he was reviving the 828 design, I was excited to see and hear the result.

The original 828 was designed to fill a gap in the market: there was a need for a small, high‑quality mixer that could match the massive consoles of the day for sound quality, while being simpler to operate, transport and maintain. Primarily finding its home in TV and radio broadcast, the 828 was seen as a classic in its day, and remained in production from 1976 to 1984, with two different ‘marks’, as well as various custom and special versions that were constructed for Alice’s broadcast clients. As the broadcast world embraced all‑digital systems, the combination of small form factor and general high quality meant many 828s soon found loving homes elsewhere and, more than 35 years after the mixer’s introduction, Ted was still regularly receiving emails asking for parts, servicing and so on — so he started to think about making a new version.

The result is the 828 Mk3, which has been designed to offer the user a large array of features in a small space, but not a cramped one: given its footprint of 460mm wide by 365mm deep and around 100mm tall, it packs plenty of punch. Amazingly, like the old Mk1 and Mk2 models, it is hand‑built in England. Such claims can be thrown around in a bit of a shady way, with companies importing not only parts but also populated circuit boards, and simply assembling them in the stated country, but this mixer is actually made in England; only the fibreglass boards are fabricated abroad, but they’re all populated with components by hand in England. 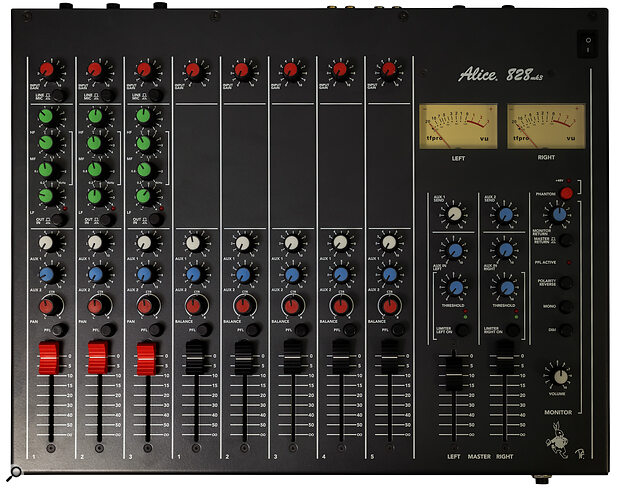 The standard configuration has three mono and five stereo input channels. Only the mono channels have mic amps and EQ, though Alice say that as the desks are hand made at their factory, all manner of user‑customisations, including stereo channel EQs, can be specified when ordering.

The 828 Mk3 is housed in a painted rolled‑steel chassis, the steel construction making the desk feel substantial, and its 7.2kg weight contributes to a premium feel. It’s populated with Class‑A preamps and EQs, and with OEP transformers (made by Carnhill) on the mic channels and the stereo bus. All the pots have a nice, high level of physical resistance too; few things make me sadder than a loose knob on a high‑end item! Unusually, the internal PSU draws power (it is pretty economical, pulling a maximum 5W) from the mains through a captive mains cable rather than the usual IEC inlet. That’s not really a problem, just a quirk, and I suspect is largely to save space.

Many manufacturers of modern equipment don’t seem to take ease of serviceability into account, with internal circuitry being made up almost entirely of tiny surface‑mount components and boards simply being swapped out in the case of a fault, or at least repairs being carried out by the manufacturer. The Alice 828 Mk3, though, uses PCBs populated with through‑hole components for nearly all of the circuits, with the only SMDs being in the RIAA drop‑in boards and a few parts of the master section. So, in the event of a mishap in the future, any competent tech should have no trouble replacing components. This may not sound too important but analogue gear is an investment, and equipment that can be maintained and repaired well into the future strikes me as a much safer place to put my money!

Before I examine the facilities in more detail, it’s worth considering who might be looking to use a mixer like this today. There will still be some people looking for a high‑end, compact mixer for small radio stations, live sound and podcasting but, my guess is that it will have most appeal to those, like me, with a fairly serious ‘hybrid’ music‑production studio. With the exception of some particularly trendy modular and computer‑free setups, most jobbing music producers now put a DAW at the centre of their workplace, and where analogue equipment is still used it tends to be chosen more often for its ability to introduce pleasing distortion than for anything else.

Popular applications include use as a characterful front end for recording to the DAW (often achieved using transformer‑loaded preamps and DIs), and using preamps or processors to add character to the stereo bus, or a mixer to add colour and do analogue summing. For example, my customised Alice Series A’s eight stereo channels mean I can sum eight stereo busses coming out of my DAW, and can hit the output transformers hard to impart some great character. The Alice 828 Mk3 can work in all of those workflows, to some degree.

There are three mono and five stereo input channels. The mono ones can be switched between mic and line modes and have XLR and quarter‑inch jack inputs, as well as post‑EQ direct outs. The preamps are a discrete Class‑A design (TL072 op‑amps are employed only for tasks such as impedance conversion and buffering), offering 50dB of gain range. Further gain on the channel fader and at the master bus take the total gain available from input to output up to 80dB. 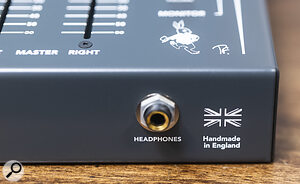 The headphone output is conveniently located on the front right‑hand corner of the desk.Phantom power is switched globally for all mic channels, which is only a problem if a 48V‑sensitive device is plugged in alongside a 48V powered one; devices that are destroyed by 48V are very rare now but do exist, so always check if you are unsure.

Each mono channel contains a Carnhill OEP input transformer, selected for its complementary nonlinearity and peak level handling, which is in circuit for mic and line inputs (the latter is padded down and routed via the mic preamp in the familiar way). These channels also feature two aux sends, the first fixed pre‑fader, the second post‑fader, as well as EQ, and PFL and pan controls.

In comparison, the unbalanced stereo, line‑only channels are quite sparse, offering up to 24dB of gain, a fader, pan, PFL and two auxiliary sends. The most obvious omission in the standard model is EQs — this area of the top panel is blank. I enquired with Ted about this, and he said a stereo EQ is a possibility in the future and that “if there’s a serious request for EQ on stereo channels we could do it as a simple mod”. There’s no direct out or insert point.

The last two stereo line channels also include RCA phono inputs and RIAA equalisation, for connecting vinyl decks (moving‑magnet cartridges, not moving‑coil types, which is as you’d expect but worth mentioning). The RIAA gain/EQ stages feed their line‑level outputs into the stereo channel path via break contacts on the left channel’s Line input jack (there’s no separate RIAA switch, so you cannot use the RCA connectors for standard unbalanced inputs). The two line input sockets are linked via normalling contacts, so that a single plug appears as dual mono.

As features go RIAA EQ seems quite niche these days, but vinyl is enjoying a resurgence and it could certainly be useful if you want to work with vinyl sampling: you could run the decks into the 828 stereo channels and its main stereo out into your audio interface, and sample without too much fuss. Again, stereo‑channel EQs would be really useful: it’d make a great two‑deck DJ mixer if it had EQs on these channels, but that would have to be a cost customisation.

The mix bus sums passively, and this is a sensible design choice given that a diode limiter comes next in the signal path. The linear part of a diode’s transfer curve needs a very low‑level input signal, and passive summing inherently involves a drop in level, so why go to the bother and expense of providing an active mix bus when you’d just have to pad the output down anyway? It’s not as if this mixer has enough channels to make passive mixing problematic. 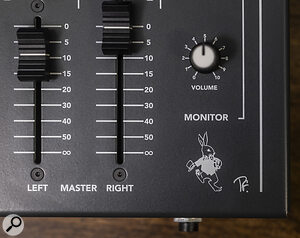 The monitor output is clean and unbalanced — and you cannot hear the effect of driving the master mix output’s transformers.The master section uses the same 60mm ALPS faders as the other channels, and hosts the activation and threshold controls for the left and right master limiters, as well as send and return level controls for aux one and two. It can also serve as a basic monitor controller, with dim, mono and master output level controls. There’s also a polarity reverse facility, which flips the polarity of the left channel, and of course the monitor return control.

As standard, the monitor signal comes out on a single stereo quarter‑inch jack on the rear, so it provides an unbalanced connection to monitors. While there are certainly some decent speakers with unbalanced inputs, many dedicated monitor speakers will have only balanced inputs, so this is a curious decision, though not an insurmountable problem. Of more concern is that while the master mix (which comes out on balanced XLRs) runs through the output transformers, the monitor feed does not. So, if you’re looking, as many will, to use this desk for summing and processing, you can’t hear the effect over any monitors you connect to the desk. To do that, you’ll want to plumb the main mix output back into your DAW, and use your audio interface for monitoring. This said, Ted stressed to me that as these mixers are all hand built, Alice can easily add various custom features such as transformer balancing for different outputs. 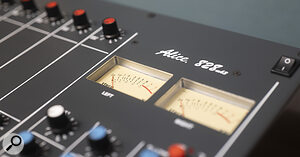 The two master‑bus VU meters are the only visual indication of level on the desk — though that’s not necessarily a bad thing if you’re looking to drive the circuitry into saturation!The two moving‑coil meters (which aren’t technically VU meters, but bespoke pseudo‑peak types) aren’t just for retro cool — I find them genuinely useful, since there are no meters or clip lights on the individual channels. Analogue processing is most useful to me these days for nonlinear character, and a fair bit of this lies beyond the boundary of sensible input and output levels. As such, a big red light trying to scare me off of intentionally driving the output stages (the limiter, the make‑up gain stage and/or the output transformers), as a needle hitting the far right of the meter. When it comes to the individual channels it’s arguable that an individual clip light can be useful, though personally I’m of the school of thought that, in this context, if it’s a problem, I’m going to hear it. By default, the meters’ 0VU mark is aligned to 0dBu, rather than the more common +4dBu standard, though this is apparently adjustable on the circuit board to other standards.

Finally, a nine‑pin D‑sub connector provides a single closing relay contact, activated when the first channel’s fader is raised. It is intended to operate an external studio ‘mic live’ red light. It’s a reasonably niche feature in the modern world, but it’s in line with the mixer’s heritage and some will no doubt find it useful.